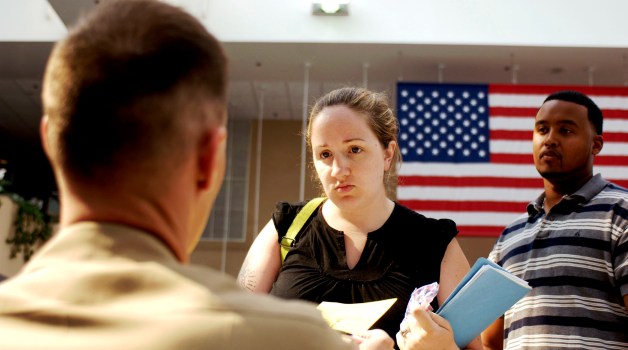 Under retired Army general Eric Shinseki, the much-beleaguered Department of Veterans Affairs has begun in earnest to undo the extensive damage to troops and their support services that’s been wrought in recent generations. One of its smarter moves was to jump on the social-media wave and use the interwebs as a way to get immediate feedback from vets and their families. The effort is spearheaded by blogger Alex Horton, an Army vet and pioneer milblogger who started tinkering with the format with a mostly-photos site, Army of Dude, while he was deployed in Iraq. He manages to build bridges between service members and their civilian counterparts with insight while avoiding political minefields or tossing the right-wing grenades that so many milblogs regularly lob. Yesterday, he offered civilians a heartfelt primer on how to talk to a vet. Today, he gives vets a rundown on how to maximize their education benefits—while avoiding some very nasty profit-making schemes:

Go to Google and search for “GI Bill schools.” The first link you get isn’t a page run by the Department of Veterans Affairs. The first result is GIBill.com, and it uses the name of the most recognized public education program in existence to its financial benefit.  It appears to be a legitimate site for information, but a cursory search of its privacy policy shows it is owned by an online marketing firm that, according to a major business publication, specializes in directing students to for-profit schools through its page. It’s a questionable marketing strategy that seeks to legitimize a page that serves little purpose other than to funnel student Veterans and convince them their options for education are limited to their advertisers.

Questionable, indeed. MoJo‘s written about the scary ripoffs perpetrated by for-profit colleges here and here and here and here. They extract a lot of cash from unwitting students with little or no payoff, in terms of degrees and jobs. But they’re so profitable, they’ve become highly valued among investors—possibly overvalued, to such an extent that they could represent a bubble market not unlike subprime mortgages.

But Horton brings up yet another way these schools break basic rules of fairness: by using official-looking sites to target service members and newly discharged vets, who come flush with government cash to apply to an education. Late last year, Bloomberg estimated that 20 for-profit colleges reaped more than half a billion dollars in taxpayer money, from GI Bill-eligible vets alone. No word on how many of those students ultimately graduate and get a job—or on how much they end up owing, above and beyond their benefit levels—but across the board, attrition and debt levels at for-profit schools are staggering, well above those for students at reputable state and private colleges. So, big props to Horton and the VA for drawing vets’ attention to the racket. It may be the least the government can do, but it’s a great start.

In not-so-related news, if you’re an out-of-work vet, Rep. Jesse Jackson Jr. (D-Ill.) may be willing to help you. He’s offering to enter unemployed vets’ resumes into the Congressional Record to get them some exposure. (Craigslist, eat your heart out.) Interested parties, email your credentials to resumesfromveterans@mail.house.gov.