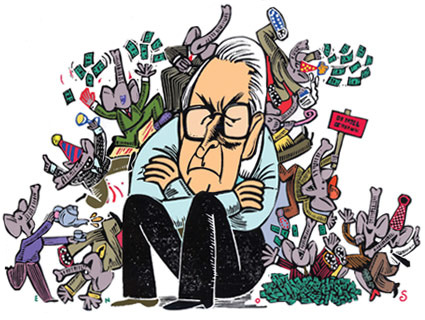 Moments before the new Republican House was to be sworn in, Rep. Tom Price (R-Ga.), the head of the House Republican Policy Committee and the chamber’s fifth-ranking GOPer, was standing in the ornate Speaker’s Lobby of the Capitol, near a roaring fire. In the celebratory hustle and bustle—new members rushing to pick up lapel pins and license plates, their kids noisily exploring the building—a reporter approached Price with a question: How could he reconcile the GOP’s pledge to tame the deficit with its decision to dodge budget calculations about the costs of tax cuts and repealing health care reform? Without missing a beat, Price replied, “It doesn’t cost the government money to decrease taxes. When you decrease taxes, as President Kennedy proved, as Reagan proved, you increase revenue to the federal government.”

David Stockman, Reagan’s first budget director in the 1980s and the godfather of the Gipper’s supply-side tax cuts, was watching the proceedings from his home in Colorado and shaking his head. Republicans like Price were, in Stockman’s view, misreading history—even perverting the Reagan message. As he saw it, they were guiding the nation toward financial ruin by pushing for tax cuts without having the guts to seriously slash spending—and dishonestly justifying their “flimflam” by citing his work.

When I spoke to Stockman that day, he was still laughing about a tidbit he had read earlier that morning: The owner of a specialty food store on Manhattan’s Upper East Side—Maureen’s Passion—was touting the top-income tax cuts the GOP had shoved into Obama’s compromise. “It all turned around when the tax bill passed,” he’d told a financial news website. “Caviar! It’s jumping off the shelf.”

“So there you go,” Stockman scoffed. “That’s a real economic recovery.”

Beyond goosing caviar sales, Stockman says, the Republicans are not sincere about boosting the economy. (He also chastises Democrats, but his most trenchant criticism slams the GOP.) He contends that the party of Reagan has spent the last three decades compounding the errors that he had a hand in engineering in the early 1980s—and a reckoning looms.

Here’s how Stockman tells the tale. In the ’80s, Reagan and his White House crew were eager to cut income taxes across the board. The aim, he asserts, was to fix the slumping economy, not to starve the beast of big government. Republican leaders on the Hill were initially skeptical—they insisted that the White House pass spending cuts before Congress tackled the tax side. “The honest-to-goodness fact,” Stockman says, “is that in February 1981, there wasn’t close to a Republican majority for tax cuts without any accompanying or coupled spending cuts. The idea of supply-side in its purest form”—that tax cuts fuel economic growth that yields increased tax revenues—”was only embraced by a handful of junior Republicans, plus Jack Kemp.”

The Reagan administration hardly minded proposing massive cuts to both taxes and spending. But then things went haywire, Stockman notes. The tax cut ballooned from $500 billion over five years to $1 trillion after lobbyists added special-interest tax breaks for various industries. And on the spending side, the Reagan administration went hog-wild throwing money at the Pentagon. The inevitable happened: The deficit ballooned.

Republicans took the wrong lesson from that episode, Stockman contends: that big tax cuts are economic magic. For GOPers to argue, as they do nowadays, that only permanent tax cuts spark economic activity is “totally inconsistent with what we used to argue in the 1980s,” Stockman notes. “These were two-year tax cuts, and they’re praising them as Republican doctrine.”

The new doctrine got a boost when it turned out you didn’t have to match tax cuts with spending cuts: The Federal Reserve was able to sell the nation’s growing debt to China and others. “It totally anesthetized the political system to the costs of deficit spending,” Stockman says. “Therefore the simplistic and reckless idea that the way to stimulate the economy is to cut taxes anytime, anywhere, for any reason, became embedded [in the GOP]. It has become a religion, it has become a catechism. It’s become a mindless incantation.”

Years later, Stockman says, George W. Bush and his crew repeated “in much greater magnitude the errors we made in the early ’80s. A massive increase in defense spending, a massive reduction in the revenue base [via long-term tax cuts], and not even an effort at spending cuts. Then the economy finally collapsed as a result of the credit crisis.”

So what’s an old-school Republican to do? Stockman, who worked as an investment banker after leaving the Reagan administration (and was indicted in 2007 for securities fraud in a case federal prosecutors later dropped), is willing to live by the basic laws of math. He opposed extending the Bush tax cuts for middle- and high-income Americans, and now he has a simple three-part prescription: First, cut military spending by $100 to $150 billion a year. (Defense Secretary Robert Gates has called for just $78 billion in cuts over the next five years.) “Are the Chinese going to come and bomb 33,000 Wal-Marts in the United States and destroy their export economy?” asks Stockman, who considers both the Iraq and Afghanistan wars foolish.

His second point is classic deficit-hawkery: Apply a means test to Medicare and Social Security. His third: “Massively raise taxes.” His favorite device: a Tobin tax, named after Nobel Prize-winning economist James Tobin, which would be levied on financial transactions. “We have a massive casino that is doing nothing but churning transactions by the millisecond, robots trading with each other, as a result of the Fed juicing the system continuously with overnight money that’s free,” Stockman says. “There’s no productive value for Main Street or the real US economy.” Such a tax could generate $100 billion annually (PDF). Stockman also fancies a version of Europe’s value-added tax on consumption. “High taxes aren’t good,” he says. “But at the end of the day, you have to pay your bills as a government.”

Stockman has not suddenly turned into a Democrat: He didn’t support Obama’s stimulus (because he didn’t think it addressed the fundamental problems of the economy), and he remains a small-government conservative who would slash all sorts of federal programs if he could. But he has no patience with today’s Republicans: On The Colbert Report, he recently dismissed the Laffer curve—the holy graphic of the supply-side crowd—as “the laugher curve.” On MSNBC’s Countdown, he called the GOP “the free-lunch party of tax cuts.”

GOP leaders, naturally, are not impressed with Stockman’s take. Grover Norquist, a top conservative strategist and tax-cut champion, all but dismisses him as a has-been: “Sometimes, folks just want back in the limelight.” If Republicans let tax cuts be held “hostage to Democrats cutting spending,” he says, “you’ll never get spending restraint or tax rate reduction. [Stockman] never understood supply-side economics.”

Stockman counters that Republicans’ taxes bad/tax cuts good mantra is disingenuous. “I don’t think those kinds of propositions are appropriate, and you could call them a lie if you really wanted to use rhetoric,” he says. “They can’t say government is too big if they’re saying hands off defense. It’s not responsible to say government is the problem when you’ve embraced 95 percent of the dollars.

“It’s very dismaying,” he adds, “to see that 30-year descent into the kind of nihilism, know-nothingism that is represented by the Republican Party today.” It’s not the Gipper’s GOP anymore.