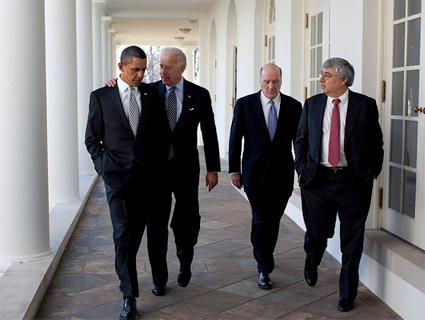 While President Obama’s proposed budget cuts have ruffled some liberal feathers, his budget blueprint calls for a huge increase in spending in that ever-so-sexy realm of transportation infrastructure—some $556 billion worth of new projects. This proposal, following on one of his State of the Union bullet points, sets the stage for a massive budget fight. Thus far, Obama has given little indication of how he might pay for it. The most likely sources of funding are politically hairy at best, and dead ends at worst.

The six-year plan would raise transportation spending by a whopping 60 percent over Obama’s previous budget. Among other things, it includes $8 billion for high-speed rail and $30 billion for an infrastructure bank to help private investors fund their projects. In a recent White House budget meeting, administration officials promised that the new spending would be paid for. That’s according to Robert Greenstein, executive director of the Center on Budget and Policy Priorities (CBPP), who attended the meeting.

But in Obama’s budget, “there is still a delta in terms of financing,” says Deron Lovaas, federal transportation policy director for the National Resource Defense Council (NRDC). “You do have to generate new revenue somehow—whether dealing with taxes or fees.”

Traditionally, a lot of the money for big transportation initiatives has come from the federal gasoline tax, which was last raised under President Clinton in 1993. Last year, Sen. Tom Carper (D-Del.) and then-Sen. George Voinovich (R-Ohio) urged the Obama administration to raise the gas tax by as much as 25 cents a gallon in order to cut the deficit and fund transportation projects like those Obama has proposed. The Simpson-Bowles deficit commission embraced the recommendation and called for a 15-cent hike.

Obama has been cool on the idea, perhaps because he’s wary of violating his vow not to raise taxes on the middle class—or because he wants to avoid kicking a hornet’s nest. Ever since he took office, Republicans have blasted the idea as a job-killing energy tax on American families. When Senate Democrats attached a gas-tax hike to their energy bill last spring, Sen. Jim Inhofe (R-Okla.) thundered: “It’s no wonder that this massive energy tax is opposed by Republicans and Democrats alike, and that it has virtually no chance of passing the Senate.” (It didn’t.)

Obama could also pay for his roads and trains by slashing tax breaks and giveaways to oil and gas companies. His budget does, in fact, trim fossil-fuel subsidies to the tune of $3.6 billion, a nod to another State of the Union pledge. But $3.6 bil won’t make a dent in his infrastructure ambitions. Oil and gas lobbyists will no doubt arm up and quash any serious attempts to squeeze their industry—particularly with vulnerable Dems from energy-rich states up for re-election in 2012.

The NRDC’s Lovaas suggests that the White House could shift more cost-sharing to the states. (Traditionally, Washington has covered 80 percent of federally assisted state-level projects, while states covered the rest.) But with the states drowning in red ink themselves, pushing them to pony up more for transportation seems like another dead end.

In short, just about any source of funding that Obama dreams up is bound to inspire a tirade. Given the choices above, he may opt for the populist tack, taking on the oil industry in the name of funding America’s future. One thing’s for sure: If there’s any hope of this baby making it off the lot, Obama’s going to have to pull off one hell of a sales job.