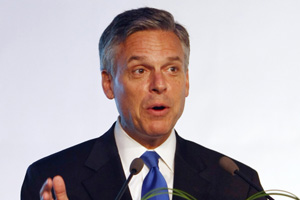 Former Utah Gov. Jon Huntsman is looking like the most climate-cognizant contender for the Republican presidential nomination. In fact, he downright looks like a climate hawk.

Huntsman—who is resigning his position as ambassador to China in order to, as they say, explore his options—has been outspoken about the need for climate action, and, as governor, signed his state up for a regional cap-and-trade program as part of the Western Climate Initiative.

He’s obviously greener than outright climate deniers like Minnesota Rep. Michele Bachmann and flip-floppers like Newt Gingrich, but he might also be more climate-hawkish than Tim Pawlenty, who called for moderate climate action while he was governor of Minnesota but more recently has questioned the degree to which climate change is human-caused. A number of Republican presidential hopefuls have, like Pawlenty, backed away from climate concern in the past year as skepticism has come into vogue in the Tea Party camp. Huntsman, who’s been out of the country and out of the spotlight since heading to Beijing in August 2009, has not backtracked—at least not yet.

In 2007, Huntsman brought his state into the Western Climate Initiative, the only Republican governor other than California’s Arnold Schwarzenegger to do so. In 2008, he set a goal for Utah to reduce its greenhouse gas emissions to 2005 levels by 2020. His climate activism ticked off the heavily Republican state legislature, which hit Huntsman with a resolution calling on him to back out of the WCI, but the state’s heavily Republican electorate didn’t seem to mind, as it reelected Huntsman in November 2008 with 78 percent of the vote.

In January 2009, Huntsman said he found it “enormously frustrating” that Republicans had not been working toward a national climate policy. “We would not need the Western Climate Initiative if it were not for the foot-dragging nature of Congress,” he said. “If Republicans had identified this problem earlier and tackled it aggressively, we would all be working together.”

When Huntsman resigned from the governorship to become ambassador to China, Marc Heileson of the Sierra Club’s Utah office lamented that the state was losing “a national leader in the world’s most important environmental issue.”

Huntsman carried his call for climate action into his ambassadorship, saying that one of his top goals would be collaborating with China on climate solutions:

We have entered an era in which all nations are called upon to work together to address the urgent problem of global climate change. The United States and China should be part of the solution, and collaboration on clean energy and greater energy efficiency offer a real opportunity to deepen the overall US-China relationship. US agencies have been encouraging their counterparts in China to expand cooperation on clean energy and other emission-reducing activities and to advance the international climate change negotiations. As Utah’s Governor, I have been deeply involved in exploring clean energy options for the Western States. During my chairmanship of the Western Governors’ Association, we focused specifically on the global nature of climate change, working directly with China and other major carbon emitters on this critical issue. If confirmed, I will continue my personal interest in working with China to identify and take action in areas that are mutually beneficial and which promote low-carbon economic growth in ways that are consistent with our trade and investment policies.

The political climate (ahem) is much different now than it was in mid-2009. If Huntsman decides to make a run for the Republican presidential nomination, will he distinguish himself from his competitors by sticking to his guns and insisting that climate change is a real problem that needs urgent action? Or will he follow the herd and make mealymouthed noises about uncertain science and the economic apocalypse that cap-and-trade would bring on?