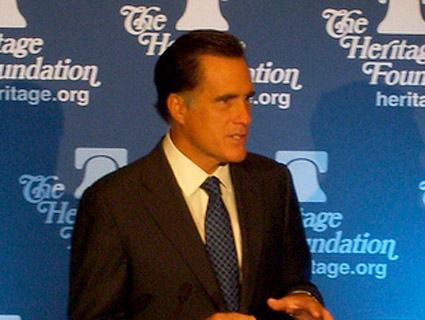 It’s that time of the year again, folks. For the next three days, 11,000 conservative politicians, speakers, activists, and organizers will descend on Washington for the annual Conservative Political Action Conference, one of the most popular political events on the right. CPAC, as it’s known, is also considered the unofficial kick-off to the 2012 presidential race, a chance for Republicans eyeing a bid for the White House to make their case before hundreds of supporters.

Mitt Romney: The former Massachusetts governor has often been a favorite of the CPAC crowd; in 2007 and 2008, Romney won the conference’s straw poll of prospective presidential candidates. That support, however, didn’t help Romney claim the GOP’s presidential nomination in 2008, which he lost to Sen. John McCain (R-Ariz.).

This year, the conservative and tea party base is energized and out in force, and another straw poll win could mean more for Romney than in years past. That said, Romney, who passed a more progressive health care reform bill in Massachusetts, doesn’t have quite the conservative credibility as Rep. Bachmann, so it’ll be interesting to see the reception among CPAC attendees to Romney’s speech on Friday morning.

Rep. Michele Bachmann (R-Minn.): The starlet of the tea party was the keynote speaker at CPAC, delivering a rousing speech this morning to a mostly-filled ballroom. Bachmann railed against the usual foes like Obama’s socialist agenda, the Environmental Protection Agency’s proposed greenhouse gas regulations, and last year’s health care reform bill. A favorite at events like this, Bachmann’s earned herself plenty of hoots and hearty applause from the audience, showing she’s got the some of the best conservative backing among the GOP’s 2012 presidential hopefuls. Bachmann also said she’s hosting a party on Thursday evening for all CPAC attendees; perhaps she’ll give us more of a hint about her future aspirations then.

Newt Gingrich: The controversial former House speaker is always popular here at CPAC, and this year is no different. This time around, though, Gingrich is widely considered to be mulling a presidential run. The coffers of his political operation, American Solutions for Winning the Future, are flush with cash. Gingrich has no problem winning over conservative crowds, but watch for any new hints from Gingrich that he’ll make a run for the 2012 GOP nomination.

Tim Pawlenty: Part book tour, part early campaigning, Pawlenty has spent a lot of time in recent months talking to voters and meeting power brokers in crucial primary states such as Iowa and New Hampshire. CPAC, though, is a key litmus test for Pawlenty. The former Minnesota’s governor enjoys support among moderate Republicans, but like Romney, his popularity among the red meat conservatives pales in comparison to Sarah Palin’s or Michele Bachmann’s.

Last year at CPAC, Pawlenty sought to burnish his hard-right cred by separating himself from the likes of Romney, ripping “elites” who wine and dine “at parties in San Francisco” and telling the president “no more apology tours, and no more giving Miranda rights to terrorists in our country.” Look for Pawlenty to again try to win over the conservative crowd. Also, a win in the CPAC presidential straw poll could give TPaw, as he’s known, a much-needed bump as the campaign gets into full gear.

Rick Perry: Is he in? Is he out? No one’s quite sure whether Perry plans to run in 2012 or not. A recent Politico article suggested that Perry is indeed eyeing a run, after the Texas governor prioritized legislative items concerning border security and abortion—hot-button issues he can point to on the campaign trail as evidence of his record in Austin.

CPAC’s friendly crowd would be just the place to drop a hint or two about his presidential intentions. His Friday, 4 p.m. speaking slot is a popular one, and there’s sure to be a huge crowd when he takes the stage. Will we see some fireworks from Perry?

Rick Santorum: The controversial, ex-Pennsylvania senator has a lot to prove in his long-shot bid for the Republican nomination. After all, he lost his Senate seat in a landslide in the 2006 election. His far-right, polarizing position on social issues will be a hit among the CPAC crowd, but he’s sure to be overshadowed by the likes of Bachmann, who speaks before Santorum today, and Sen. Rand Paul (R-Ky.), who addresses CPAC an hour or so afterward.

Mitch Daniels: The Indiana governor’s inclusion on the CPAC roster stirred some controversy after Daniels called for a “truce” on divisive social issues such as abortion. One group, the American Principles Project, planned to boycott CPAC for putting Daniels on the speaking roster, calling it “an affront to the millions of conservatives who believe that social issues such as abortion and traditional marriage are non-negotiable,” according to APP’s executive director Andy Blom. As the Washington Post‘s Chris Cilizza put it this morning, “Daniels will need to be at his best to win over what almost certainly will be a skeptical crowd.”

Daniels has been coy about his presidential prospects, previously saying he doesn’t want to subject his family to the pressure and media barrage of the presidential campaign. He is, however, featured on the CPAC straw poll ballot. How well he fares on the poll will be indicative of Daniels’ ability to woo conservatives.

Haley Barbour: The Mississippi governor, who’s widely seen as considering a presidential run, has stumbled early on. In an interview with the conservative Weekly Standard magazine, Barbour praised the pro-segregation Citizens Council, which he claimed successfully integrated the public schools in Yazoo City. The NAACP accused Barbour of revising Southern history, calling it “offensive that he would try and create a new historical reality that undermines the physical, mental, and economic hardship that many African-Americans had to suffer as a result of the policies and practices of the White Citizens Council.”

Barbour’s speaking slot—Saturday morning at 9:30 am—is a mediocre one. It’s unclear how much Barbour, a former RNC chair and lobbyist, has to gain here at CPAC. He’s already quite popular within the party, and a win in the straw poll wouldn’t do all that much to further his presidential aspirations.

Rep. Ron Paul (R-Tex.): A favorite among CPAC’s attendees, the libertarian Paul won the conference’s 2010 straw poll. As CBS News reported, Paul, who ran unsuccessfully in 2008, will address a conservative group in the key state of Iowa next month, suggesting he’s considering another run for the White House. Paul says he’s 50-50 on launching another presidential run in 2012. Another strong showing in the CPAC straw poll this year, though hardly a game changer, could tilt those odds more toward challenging for the GOP nomination once again.

John Thune: John who? The telegenic South Dakota senator’s name is often featured on lists of potential GOP presidential candidates. But his name recognition is minimal, and he hardly registers in the polls.

If he does have presidential dreams, Thune’s CPAC speech is a big moment. A win in the straw poll, or even a hearty reception from the conference’s vocal attendees, could propel Thune into the limelight just as the campaign gets underway.

Herman Cain: Nothing the former Godfather Pizza CEO can say or do will help his extremely unlikely presidential bid.