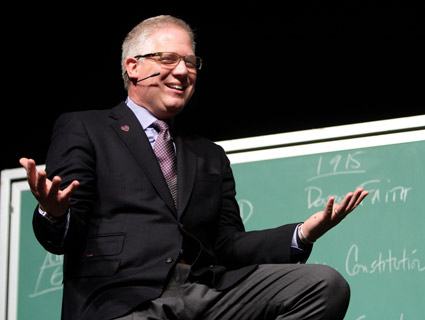 On Tuesday night, Fox’s Grandmaster Conspiracy Mash-Up Artist known as Glenn Beck took a swipe at me. It wasn’t for the article I had posted earlier that day noting that Beck’s bizarre conspiracy theorizing—claiming that the Egyptian uprising had been manufactured by Islamic extremists and “uber-leftists” in cahoots to create chaos that will lead to a worldwide caliphate and a communist new world order—was placing him on a collision course with Fox News and non-nutty conservatives. Instead, Beck was ticked off by something I had said last week on MSNBC’s The Last Word. His attack, though largely inconsequential, illustrates Beck’s methodology: Ignore facts and assail straw targets. Perhaps more seriously—if that can be said about Beck—this part of Beck’s soliloquy showed that when it comes to promoting democracy abroad, he’s a flip-flopper, willing to take whatever stance serves his conspiracy du jour.

Here’s what happened on Beck’s show:

Beck: Here’s David Corn. You want to talk about a fringe-y. He’s from Mother Jones. Yes, they’re still in business. Calling me crazy for saying the Muslim Brotherhood is dangerous.

Video of me on The Last Word: Then you have Glenn Beck, who’s literally off the charts. What does he say? He quite literally says on the show: This is not about these people, this is not about freedom, this is not about democracy. This is about a conspiracy to have the Muslim Brotherhood take over, not just Egypt but all of Europe and threaten the United States, while working with leftist groups. He is cheapening [the protesters’] action and their sacrifice. It’s beyond shame. It’s beyond reason.

Beck: Really David. That’s why you work for Mother Jones and I work here. Night One we showed the similarities between Egypt 2011 and Iran 1979. That, too, was all about hundreds of thousands of people risking their lives in favor of democracy and freedom. But what happened? How’s that democracy working out in Iran? How’s democracy working anywhere in the Middle East, outside of Israel? Show me the democratic model in the Islamic world.

The clip Beck used deftly edited out a sentence: “There are hundreds of thousands, millions of Egyptians, turning out into the streets, putting their own lives at risk—some of them killed—in favor of democracy and freedom of expression.” Apparently, such a description of the protests was not in sync with Beck’s goal of exploiting the demonstrations for his own conspiratorial (and profitable) purposes.

More to the point, Beck did not challenge or disprove anything I had said about him. In fact, he had declared during his January 31 show that the Egyptian uprising “isn’t about freedom or democracy.” And the next day he said, “It is not about freedom. It is not about democracy. It is about an Islamic state.” Beck couldn’t deny uttering the remarks I had criticized. (Okay, maybe he could.) Rather, Beck claimed that I had dubbed him “crazy” for tagging the Muslim Brotherhood as dangerous. Not so. I had questioned his contention that the massive Egyptian uprising had been whipped up by the Muslim Brotherhood as part of its plan for global domination and that leftists worldwide were part of this scheme. I had not pronounced Beck off the charts for worrying about the influence of the Muslim Brotherhood in Egypt, which is a legitimate concern. Beck derided a comment that was never made.

Then he proceeded on a flight of hypocrisy, suggesting that the demonstrations in Egypt cannot lead to democracy, because democracy cannot work in the Middle East (outside Israel) or in the entire Islamic world. With these words, Beck was erasing Turkey and Malaysia from the map.  But he also was forgetting his past support of the Iraq war as an endeavor to bring democracy to that country.

A few examples: In March 2004, Beck hailed the “great deal of good news” about the “transition to democracy in Iraq.” Two years later, on his television show, Beck maintained that the point of the Iraq war was not to disarm Saddam Hussein but to promote democracy: “Searching for weapons of mass destruction was a side benefit of going into Iraq. The real reason was to plant the seeds of democracy and change the face of the Middle East.” He added, “We have to succeed there.” Months later, Beck celebrated “the positive side of the war in Iraq”—which, he said, included freedom of speech in Iraq (marked by the widespread display of political campaign posters) and the election of female legislators.

So when Beck was selling the Iraq war, he enthusiastically claimed that democracy was taking root and blossoming there. But now, as he tries to tie pro-democracy protests in Egypt to a sinister Islamic extremist plot to subordinate much of the planet, he’s not so hot on democracy in the Middle East or the Islamic world, essentially arguing that democracy cannot work in an Islamic nation. For Beck, it seems, promoting democracy only matters when it serves his larger purpose.

Beck’s brief and snarky put-down targeting me demonstrated that he’d rather rig a debate than participate in one, and that his paranoid, fear-mongering conspiracy theories trump any appreciation for democracy.

And, by the way, I once played softball with Van Jones.