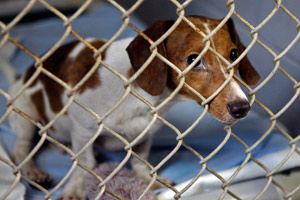 When the House GOP passed over Rep. Steve King (R-Iowa) for the chairmanship of a key immigration panel, the conventional wisdom was that Republican leaders were wary of elevating a bombthrower whose headline-grabbing remarks about illegal immigrants might stoke the base but alienate moderates and Latinos. The job on the House Judiciary’s immigration subcommittee went instead to Rep. Elton Gallegly (R-Calif.), a 13-term, by-the-book conservative without much of a national profile. But if House Speaker John Boehner and his deputies had concerns about extreme rhetoric, they should have perhaps take a closer look at Gallegly’s past remarks—including eyebrow-raising statements linking illegal immigration to heinous crimes against animals.

Like King, Gallegly is an ardent immigration hawk who wants to take away birthright citizenship and backs an across-the-board crackdown on illegal immigration. But his other pet issue is animal cruelty. For years, he has campaigned against so-called “animal-crush” fetish videos, “where small—and sometimes large—animals were crushed to death under the stiletto heels or bare feet of scantily clad women for the sexual excitement of the viewer,” as Gallegly himself once described it.

During the last Congress, Gallegly’s biggest achievement was the passage of an animal-cruelty bill that outlawed videos that depict the “drowning, impaling, burning and crushing of animals.” He also used the opportunity to combine his two biggest crusades, arguing that those who commit despicable violence against animals are also likely to be linked to illegal immigration.

In a July 2009 op-ed for The Hill, Gallegly argued for the passage of his animal-crush bill, noting that such snuff films are somehow connected to illegal immigration and crime: “[G]ang activity, illegal gambling, drug trafficking, illegal immigration and acts of human violence all go hand in hand with animal cruelty.” (The piece had been posted on Gallegly’s official congressional website, but it has since been taken down.)

In the op-ed, Gallegly echoed the conservative criticism that illegal immigrants bring with them a bigger world of crime, and he points out that an Arizona crime syndicate that “preyed on illegal immigrants, subjecting them to kidnappings, home invasions, and armed robberies” is also being accused of “raising roosters for illegal cockfighting matches.” While linking illegal immigration and animal-crush videos, Gallegly also maintained that animal abusers tend to become serial killers. The Son of Sam, the Boston Strangler, and the Unabomber all had a history of torturing animals, he writes, and Jeffrey Dahmer “progressed from cutting up animals to cutting up humans and eating them.” Gallegly was lumping together illegal immigration, animal murders, and the worst serial killers of modern times.

Pro-immigration advocates accuse Gallegly of trying to hype up the criminality of illegal immigration by linking their world to animal abuse and other heinous acts. And it isn’t the first time that Gallegly has made the illegal immigrant-animal cruelty connection. In February 2008, he decried the “widespread mistreatment of ‘downed’ dairy cows—those who are too sick or injured to walk” at a meat-packing plant in his own district. He slammed such facilities for not only disregarding federal food safety laws, but also committing other illegal acts as well—namely hiring illegal immigrants. “I’ve always said animal abuse is often accompanied by other crimes…Meat packing plants are notorious for employing illegal work forces,” Gallegly wrote in his 2008 press release. “In the past few years, federal agents from Immigration and Customs Enforcement (ICE) have raided dozens of meat packing plants across the country. In the course of these raids, they have discovered numerous crimes: identity theft, drugs and, of course, illegal workers.” He’s suggesting that if someone cares about protecting abused animals, he or she should also be concerned about stamping out illegal immigration. (Gallegly’s office did not respond to multiple requests for comment.)

Liberal supporters of immigrants don’t deny that the country’s illegal immigrants continue to work and live in the shadows, often exposing them to crimes and exploitation. But Gallegly has made it clear that he wants to crack down on illegal immigrants rather than provide a legal pathway for them. And he’s tried to rally opponents of animal cruelty to his cause. In his first hearing as subcommittee chairman last week, Gallegly blasted the Obama administration for failing to target illegal immigrants at the workplace and ensuring that “those jobs that are available go to Americans and legal immigrants.” Judging by his past remarks, it may not be long before he accuses the workplaces that harbor illegal immigrants of abusing animals, as well.