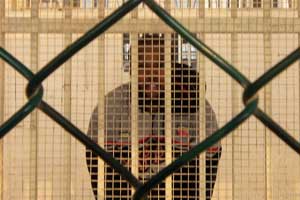 Gulet Mohamed is being held at a deportation facility in Kuwait. | Photo: Mohed Mohamed.

UPDATE, 5:00 p.m. Tuesday: An emergency hearing and a caving Obama administration could mean Gulet Mohamed will be on his way home soon.

Original Article: On Tuesday morning, a lawyer for Gulet Mohamed, an American teenager who’s been detained in Kuwait for almost a month, sued the Obama administration for blocking his client’s repatriation to the US. The allegation at the center of the suit, which names as defendants the heads of the Justice Department, the FBI, and the federal Terrorist Screening Center, is simple: By placing Mohamed on the no-fly list based on nothing but suspicion and refusing to allow Kuwaiti officials to deport him, the US government is denying Mohamed the most basic right of American citizenship—the right to actually reside in the US.

In response, the US government may claim that Mohamed’s plight is not its responsibility. On December 20, according to the lawsuit, Mohamed was handcuffed, blindfolded, and taken away by “two men in civilian clothes.” Deposited at an unknown location, “he was repeatedly beaten and tortured by his interrogators,” the suit claims. Since December 28, he has been held in a Kuwaiti deportation facility. State Department spokesman P.J. Crowley has denied that Mohamed was “detained at the behest of the United States.”

Between December 20 and 28, no one in Mohamed’s family heard from him. During that time, Mohamed says his interrogators beat him with sticks, forced him to stand for hours on end, and threatened him with electrocution, while questioning him on his travels and past. Questions like: Why had an NBA-loving, video-game-playing American teenager traveled to the Arab world—especially Yemen and Somalia, two hotbeds of anti-American radicalism? Did Mohamed meet with Anwar al-Awlaki, the New Mexico-born Al Qaeda propagandist who is reportedly hiding out in Yemen? And how did Mohamed feel about terrorism?

Mohamed, for his part, has told the New York Times that like any “good Muslim,” he “despise[s] terrorism.” Mohamed, his lawyer, and his family claim that he was in Yemen and Somalia in 2009 to study Arabic and learn more about the family of his late father, a man who he never knew. They note that Mohamed faces no charges, or even allegations of wrongdoing, in either Kuwait or the US. And they say there is significant evidence that the US government is behind everything that happened to Mohamed. If Mohamed’s lawyer, Gadeir Abbas, can prove that in court, he’ll be well on his way to getting his client home to the US.

There’s certainly circumstantial evidence to suggest that the US was and is involved in Mohamed’s detention. Mohamed and his lawyer say his interrogators possessed detailed information that could have only come from US government sources. Abbas explains in court documents:

The subject matter of the interrogators’ questioning—communicated in English and Arabic—indicates that [the US government] facilitated Mr. Mohamed’s illegal detention, interrogation, and torture. Mr. Mohamed’s interrogators asked him detailed questions about his American siblings, referenced non-public facts regarding his family, and even had information about specific encounters Mr. Mohamed had in Virginia. One of his interrogators claimed to have met Mr. Mohamed at a mosque in Virginia where the two exchanged introductions briefly.

Mohamed also claims that after he was transferred to a deportation facility, he was visited several times by the FBI and told that he would not be allowed to return home until he cooperated with their questioning. Mohamed says he repeatedly asked for his lawyer and invoked his right to remain silent, but that FBI agents continued to visit and interrogate him. (Under US law and constitutional precedent, questioning is generally supposed to stop once the person being questioned requests a lawyer.)

Perhaps more important, however, is the fact that Mohamed’s story is consistent with those of other Muslim Americans who have been detained by foreign governments in the wake of 2009’s Christmas Day “underwear” bombing attempt. Civil liberties groups believe that Mohamed’s case is part of a broader trend called “proxy detention,” in which the US government has Arab countries detain Muslim Americans and rough them up before sending the FBI to question them about potential ties to terrorism. In most of the cases the groups point to, the Americans in question are placed on the no-fly list and told they cannot return home until they cooperate with investigators—even though they don’t have a lawyer present.

Abbas, Mohamed’s lawyer, believes the Obama administration’s use of the no-fly list to effectively prevent Americans from returning home is unconstitutional. According to Abbas, Americans don’t even have a meaningful opportunity to challenge their presence on the no-fly list. If you’re on it, you’re not allowed to see, let alone try to rebut, the “evidence” against you. Your only option is to send your name to the Department of Homeland Security—which isn’t even directly responsible for creating the list—and, as Abbas writes in the lawsuit, “hope that an unknown government agency corrects an error or changes its mind.”

The US government may also try to argue that Mohamed doesn’t have to return to the US by plane: he could fly to another country and return by land or sea to the US. But Abbas has anticipated this line of attack. Mohamed “has but one means of returning to the United States: a flight on an airplane to the United States,” Abbas writes. “He is in a deportation facility and lacks [other] options.” (Under Kuwaiti immigration law, people who are being deported are required to return via direct flight to their country of origin.)

Abbas also argues that the US could easily allow Mohamed to fly home if it wanted:

Mr. Mohamed is willing to undergo any suitable screening procedures and in-flight security measures that the government may deem necessary. It can hardly be disputed that the government is capable of safely ensuring that Plaintiff can return to the United State by plane. Indeed, U.S. officials have in the past issued one-time waivers permitting persons on a No Fly List to fly to the United States. This has been done without incident.

If his family had its way, a lawsuit would never have been necessary, and Mohamed, the youngest of seven children, would be home by now. Gulet’s mother, brothers, and sisters have tried almost everything to get the baby of the family out of jail and back to his home in Alexandria, Virginia.

Some of them contacted the press. Others lobbied Congress and government agencies. They told everyone who would listen that their brother is not a terrorist, as the US government seems to suspect, but just a curious teen who took a pilgrimage to get in touch with his roots.

One brother, Mohed, flew to Kuwait and spent $1,500 on a one-way, direct ticket to Dulles International Airport outside Washington, DC, so the Kuwaitis could deport Gulet. Kuwaiti officials took Gulet to the airport late Sunday evening. But Gulet, who US officials say is on the no-fly list, wasn’t allowed to board the plane. On Tuesday he remained in Kuwaiti detention.

The Justice Department referred reporters to an FBI spokesman. That person did not immediately return calls requesting comment.