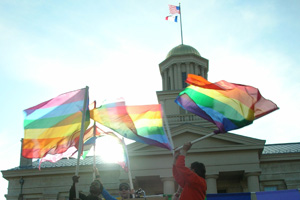 Anti-gay-rights crusader Bob Vander Plaats buddied up with Chuck Norris and played a central role in Mike Huckabee’s Iowa caucus victory in 2008. Last November, he successfully got voters to oust three state Supreme Court justices whose decision opened the door to gay marriage. Now he’s got his eye on the 2012 Iowa Republican caucuses. But how far can GOP presidential hopefuls go to appease social conservatives without alienating an increasingly tolerant general electorate?

Today Vander Plaats heads the “Christ-centered” Family Leader, the umbrella organization for groups including the Iowa Family Policy Center, whose president routinely says things like, “The secondhand impacts of certain homosexual acts are arguably more destructive, and potentially more costly to society than smoking.” The Family Leader, determined to make evangelical family values central to the 2012 election, has announced plans to host a series of speeches by the next batch of presidential aspirants starting with former Minnesota Gov. Tim Pawlenty.

Pawlenty vowed to axe the Don’t Ask, Don’t Tell repeal last week when he spoke on the radio program of Bryan Fischer, a Vander Plaats supporter. Fischer is a director at the American Family Association (AFA), which poured more than $100,000 into Vander Plaats’s judicial ouster effort. Largely due to Fischer, the Southern Poverty Law Center recently blacklisted the AFA for hate speech. “Homosexual sex should be just as against the law as injection drug use is,” he blogged. He also wrote that “homosexuals in the military gave us the Brown Shirts, the Nazi war machine and six million dead Jews.” Pawlenty didn’t say anything that headline-grabbing, but it’s still early.

Pawlenty’s trailing in the polls, which show Huckabee as the early favorite for the upcoming Iowa caucuses, trailed most closely by Mitt Romney, Sarah Palin, and Newt Gingrich. But Huckabee may not run. If he doesn’t, his evangelical Christian constituency—turned off by Romney’s Mormon faith and Gingrich’s messy love life—would be up for grabs. And if 2012 is anything like 2008, faith will dominate much of the debate. The Family Leader also invited to its series religious-righters Michelle Bachmann and Rick Santorum. The AFA’s Fischer supports U.S. Rep. Mike Pence and dark horse candidate Herman Cain, whom he compared to Palin.

Another dark horse, the gay Republican Fred Karger, is being excluded from a presidential debate because an Iowa Christian group said he “is not a legitimate candidate.” That cuts against the advice of John McCain’s last presidential campaign manager Steve Schmidt—a social moderate—who in 2009 urged the GOP to distance itself from perceptions that it’s “anti-gay”:

Republicans should reexamine the extent to which we are defined by positions on issues that I don’t believe are among our values and that put us at odds with what I expect will [be] over time, if not a consensus view, then the view of a substantial majority of voters.

Schmidt is concerned about the impressions a new generation of gay-friendly voters has about the GOP: His candidate decisively lost the youth vote to Barack Obama in 2008. McCain did eventually clench his party’s nomination without actively campaigning in Iowa but he became the electable fallback in a primary field awash in a cacophony of pious proclamations. This round, if no McCain-style candidate steps forward, Obama may find himself up against someone firmly in the pocket of the religious right. That could bode well for Obama if his opponent embraces the rhetoric of Vander Plaats and his allies in a country increasingly supportive of gay rights.