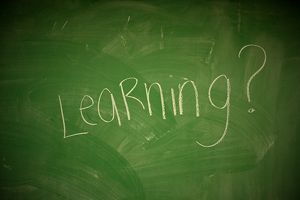 Last night, I asked Parent Revolution to send me a copy of the letter that the Compton Unified School District mailed out to parents of students at McKinley Elementary School. Compton Unified printed the letters on Wednesday, Jan. 19th, and sent them to parents who requested that this chronically low-performing school be turned into a charter:

“As part of the District’s responsibility to evaluate the Petition, we ask that you come to McKinley Elementary School on January 26 or 27, 2011, between the hours of 7:30am-9am or 3pm-6pm (on either date) to sign a form verifying your signature on the Petition. Please make sure to bring photo identification (such as a California driver’s license) as you will be asked to show identification before being provided a signature verification form.”

Why such extremely narrow window of time? The Compton District officials know that most Compton residents are low-income parents, often working two jobs. Do they open their mail every day? I don’t. Will parents be able to get time off from work on such short notice? I can’t. Not to mention that the district requests that all parents come with photo IDs, which will surely be an issue for some undocumented parents in this predominantly Latino school.

Then the letter says that the signatures of no-shows will be disqualified.

This gives me serious pause. I’ve been working with the San Francisco Unified District since November, where I report on a high school with test scores similar to McKinley’s, and I haven’t seen anything like this in SF.

To be fair: Parent Revolution doesn’t seem like a fair player in this political fight either. The signature gathering process was done under the radar; Louis Freedberg over at California Watch rightfully calls it a “stealth campaign.” The district, the school, and even McKinley’s PTA didn’t know anything about it in advance. As state PTA president Jo Loss told California Watch, the Parent Revolution’s petition gave parents only one option: to turn this school into a charter, even though the law provides three other choices.

If nothing else, it’s hard to shake the feeling that the Compton District’s extremely narrow window for verifying signatures of this most controversial and important petition in education reform was unprofessional at best, deliberate at worst. Ron Suazo, Compton School District spokesperson, didn’t want to comment on the phone when I called this morning. He told me he’ll email me the official response by the district explaining their rationale later today. I’ll post it as soon as it comes in, but it’s 6:30 pm PST and so far, nothing.

[Update on Jan. 27: Good news for parents who signed the petition, after two days of calling and emailing by MoJo, the Compton Unified sent in a statement from Acting Superintendent Karen Frison:

“We understand McKinley parents/guardians may not be able to attend our signature verification process, so we will offer a make-up date the following week, and we will also contact them if they have been unable to meet with us. The district is open to developing other ways for them to participate in an effort to accommodate their work schedules. The signature verification process is designed to protect the voice of McKinley’s families, regardless of their position on the parent trigger law.”] 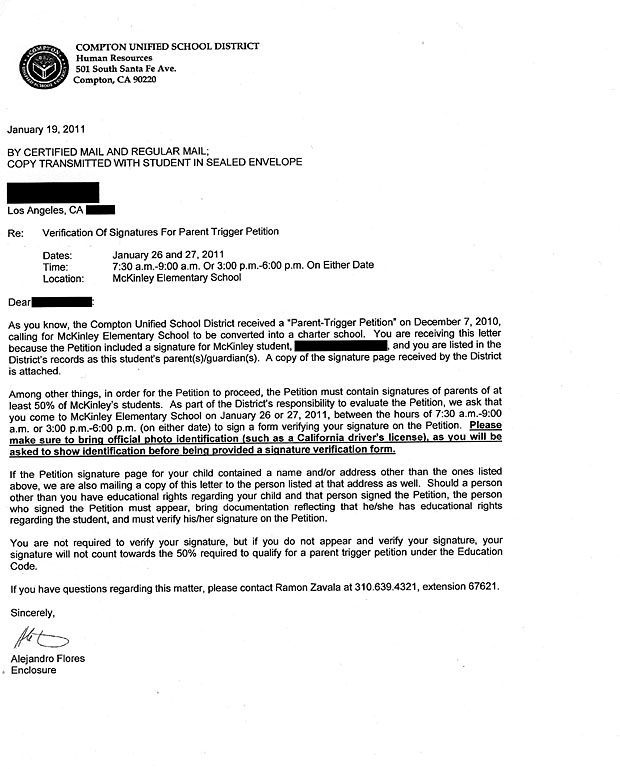