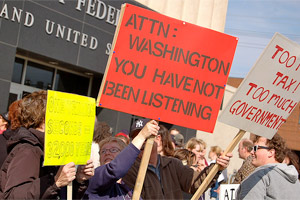 Picking the chairman of the Republican Party is not the most democratic process. Regular rank and file party members don’t have much say over who’s in charge. The decision is made by the 168 members of the Republican National Committee. Normally the campaign is highly insular, with lots of backdoor deal-making. But this year isn’t a normal year in politics, in large part because of the rise of the tea party movement—which for the first time this week is trying to play a role in deciding who takes the helm of the GOP.

Despite record Republican gains in elected offices around the country, many influential party members, including Dick Cheney, are deeply unhappy with the current RNC chairman, Michael Steele. Some of those people are attempting to enlist the tea party to help unseat him. The problem? The tea partiers can’t actually vote for the RNC chair. So instead, on Wednesday, the conservative advocacy group and tea party supporter FreedomWorks and the Republican National Conservative Caucus hosted a debate among aspiring RNC chairmen who’d like to knock off Steele—and the groups let tea partiers take a shot at vetting them.

Organizers invited tea party members to attend and field questions for the candidates, both by email and Twitter, and the debate was webcast by FreedomWorks so that tea partiers everywhere could watch. (Twenty RNC members were also in the audience.) Whether the grassroots activists will ultimately play a big role in electing the next RNC chair is anyone’s guess, but as FreedomWorks VP Max Pappas said, their involvement in such an unprecedented public debate was certainly bringing some transparency to the process.

Questioners included Ana Puig from the Kitchen Table Patriots in Pennsylvania—credited as one of the original founders of the tea party movement—and Tito “The Builder” Munoz, the Virginia construction-company owner Sarah Palin made famous during the 2008 presidential campaign who’s now a staple on the tea party circuit. Taking their questions were some other rather insidery establishment-Republican types running for party chair, including: Mike Duncan, who chaired the RNC during the GOP’s disastrous 2008 election cycle but also cofounded American Crossroads, Karl Rove’s secretive campaign fund that spent gobs of untraceable money in the midterm election; Ann Wagner, a former ambassador to Luxembourg and big-time GOP fundraiser from Missouri; Saul Anuzis, a Michigan RNC committeeman who lost to Steele in the chairman’s race in 2009; and Gentry Collins, the former RNC political director who just quit and blamed Steele for screwing up a host of close races in the midterm election.

Notably absent was Steele himself, who hasn’t said yet if he plans to run for another term. Also missing was Cheney’s hand-picked candidate, Maria Cino, a former RNC staff director and Bush administration official. She was apparently hoping to contact all 168 RNC members to talk to them personally about her candidacy before appearing at the debate, but she evidently didn’t quite finish in time.

According to Indiana RNC member James Bopp, one of the organizers of the event (as well as an architect of the Citizens United decision and defender of anti-gay-marriage donors), that was a mistake. “I think anybody that didn’t come lost a tremendous opportunity to advance their campaign,” he said after the debate. Tea partiers in the audience agreed. Even so, Dee Armstrong, from the Blue Ridge Patriots in West Virginia, still wasn’t all that satisfied with the people who did bother to show up. She was annoyed with Anuzis, who’s known for his new media savvy, for tweeting through the entire debate, for instance. “That’s not polite,” she said. And she didn’t think the candidates had sufficiently answered her question about how the RNC might integrate the tea party and its ideas into the party organ. She has been amazed to discover that the party has no regular way of communicating with the people it’s supposed to represent, noting that West Virginia tea party groups have weekly conference calls to find out what’s going on across the state. “I can’t believe the RNC doesn’t do that,” she said. Armstrong added she’d like to be more involved in the RNC and the chairman’s election, but notes cynically that she can’t vote. All the tea party can do, she said, is try to influence the process from the outside.

The mere existence of the debate was evidence that the movement is having some influence on the race. Even though most of the candidates were traditional party stalwarts who spent the bulk of their time trying to prove that they could raise lots and lots and LOTS of money, they did throw some bones to the tea party. They promised to stay out of primary fights, such as the one in Alaska recently that ousted incumbent senator Lisa Murkowski. They dissed earmarks and championed American exceptionalism. But mostly, they talked about money—how they’d raise it, what they’d do with it, and how the current RNC leadership (Steele went unmentioned) had failed to procure enough of it or spend it in the right places.

Much of the money talk involved how the candidates would woo the big donors who have fled the RNC (apparently for more anonymous giving opportunities with outside spending groups headed up by people like, well, Duncan himself). But Duncan, who insisted at one point that “rich people are just like us,” claimed that the problem with the political system isn’t that there’s too much money in it, but rather that there’s “not enough money in politics. We spend $700 billion a year on potato chips” but not enough on electing good leaders. Wagner, who could be the first female ever elected to the post (Marie Louise Smith ran the RNC in the mid-’70s, but was appointed by President Ford), insisted that for the RNC chairman, “It’s money first. It’s money second. It’s money third.”

There was no clear winner of the debate, though there was an obvious loser—Steele. The fact that the event had been orchestrated by a big chunk of the RNC itself suggests that Steele is in deep, deep trouble. When I called the RNC press office on Monday to find out more details about Wednesday’s debate, a spokesman informed me (after a long hold) that no one at the RNC had any idea what I was talking about, suggesting that Steele is even more out of the loop than Mother Jones. And recent polls show that a large number of RNC members want him replaced, though it’s not clear what they’d like to see in his successor.

The RNC leader responsible for spearheading Wednesday’s debate is Bopp, an icon of the religious right who’s attempted to secure a committee rule that would force Republican candidates to sign a “purity pledge” promising to stick to core Republican principles or lose party funding. His hard-line views are finding a welcome audience with tea partiers, some of whom are now his clients in their various election challenges around the country. They may help bolster his position against other party leaders such as former RNC chairman and current Mississippi Gov. Haley Barbour, who has said that such narrow views are detrimental to a party trying to open the big tent.

Meanwhile, the debate also suggested that one of the RNC’s biggest challenges isn’t its current leadership (or the rumors of layoffs that were swirling around in the middle of the debate), but the new outside groups that are raising tons of corporate money in the wake of the Supreme Court’s Citizens United decision, much of it unbound by the disclosure rules that govern party donations. Those groups are making it difficult for the RNC to remain relevant.

Wagner herself said after the debate that the outside group problem is one of the reasons she decided to run for the RNC’s top job. She had headed up the campaign of Roy Blunt, the Missouri congressman who was just elected to the Senate. Wagner said that during the campaign, she was concerned about the way the RNC was trending because Blunt’s campaign was not getting the resources that it should have. As a result, outside groups came in to fill the void, but because federal law bars those groups from coordinating with the campaigns, she said trying to run Blunt’s campaign was like “flying blind.” She said the RNC needs to play a bigger role in elections to prevent conflicts with such groups, which can be unpredictable and made her job as campaign chair “nerve-wracking.”

“You need them but you don’t know what they’re going to do,” she lamented.