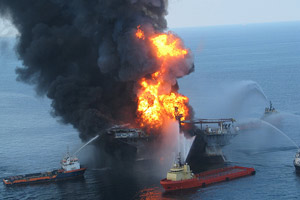 In a perfectly enlightened, technologically advanced world, computer software could be used to analyze existing data and determine what happened on the Deepwater Horizon just before it exploded in the Gulf of Mexico. In that world, all relevant parties with access to such data would be ready and willing to offer it up.

We’re not there yet. Today, Representatives Ed Markey (D-Mass.) and Lois Capps (D-Calif.) wrote a letter to National Oilwell Varco (NOV)—the company that provided the data display systems used by the drilling crew to monitor the well—demanding that the company hand over key information to the National Commission on the BP Deepwater Horizon Oil Spill and Offshore Drilling, the independent commission formed by President Obama to investigate the disaster. The information locked away in NOV’s vaults could help the commission recreate the computer displays that engineers on the Deepwater Horizon were looking at just seconds before the rig exploded.

Unfortunately, NOV is declining. In their letter to the company, Markey and Capps cite their difficulties with NOV as a big reason why the commission needs the authority to issue subpoenas—a privilege it doesn’t currently enjoy. The House passed a bill co-sponsored by Markey and Capps (by a vote of 420-1) giving it that power earlier this year. But Senate Republicans stymied any further progress.

“Your refusal to provide extremely relevant information is yet another example of why the National Commission should be given that power,” Markey and Capps write to NOV. “If Congress is not able to enact such legislation, it will be up to those who do have subpoena authority, including the Congress, to make sure the true facts of the BP spill are placed into the public domain.” In a press release, Capps says that “[i]t’s clear that National Oilwell Varco shares the same goal as Senate Republicans, protecting BP from full scrutiny of the independent commission.” And granting subpoena power to independent panels is nothing new, she says, citing the fact that the privilege was awarded to both the Warren and Three Mile Island Commissions.

Without subpeona power, the spill commission is toothless. Markey and Capps are using NOV’s heinous stubbornness to hammer that point home, and are lucky to have gotten their bill out the door in a Democrat-controlled House. But it’s not going anywhere in the Senate. Realistically, though, it doesn’t seem as though Democrats would have the legislative capital to burn on empowering the commission anyway. That’s too bad.