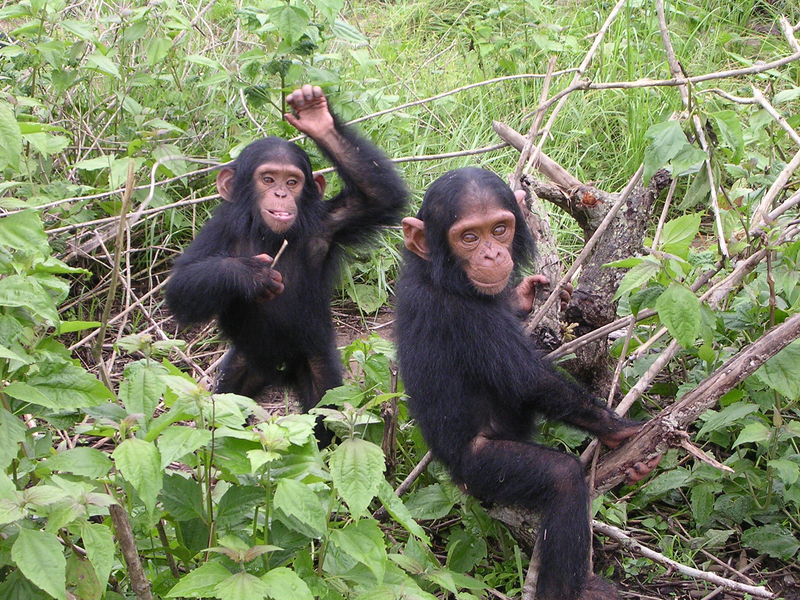 Young female chimpanzees treat sticks as dolls. That’s according to a new paper in Current Biology. Researchers at Harvard and Bates report more than 100 cases of stick-carrying by young female chimps during 14 years of observations at Kibale National Park in Uganda. Their findings:

“We have seen juveniles occasionally carrying sticks for many years, and because they sometimes treated them rather like dolls, we wanted to know if in general this behavior tended to represent something like playing with dolls,” says Richard W. Wrangham, the Ruth Moore Professor of Biological Anthropology at Harvard. “If the doll hypothesis was right we thought that females should carry sticks more than males do, and that the chimpanzees should stop carrying sticks when they had their first offspring. We have now watched enough young chimpanzees to test both points.”

The findings link this play to adult behavior, since female carry infants more than 99 percent of the time and males less than 1 percent of the time—making this a seemingly clear case of nature over nurture. But there’s little evidence of stick-carrying behavior in other chimpanzee communities. So the Kibale chimps appear to be copying a local behavioral tradition—making this a case of nurture over nature. Put them together, and you get a clear case of biological and social influences entwining. Here’s the abstract:

Sex differences in children’s toy play are robust and similar across cultures. They include girls tending to play more with dolls and boys more with wheeled toys and pretend weaponry. This pattern is explained by socialization by elders and peers, male rejection of opposite-sex behavior and innate sex differences in activity preferences that are facilitated by specific toys. Evidence for biological factors is controversial but mounting. For instance, girls who have been exposed to high fetal androgen levels are known to make relatively masculine toy choices. Also, when presented with sex-stereotyped human toys, captive female monkeys play more with typically feminine toys, whereas male monkeys play more with masculine toys. In human and nonhuman primates, juvenile females demonstrate a greater interest in infants, and males in rough-and-tumble play. This sex difference in activity preferences parallels adult behavior and may contribute to differences in toy play. Here, we present the first evidence of sex differences in use of play objects in a wild primate, in chimpanzees (Pan troglodytes). We find that juveniles tend to carry sticks in a manner suggestive of rudimentary doll play and, as in children and captive monkeys, this behavior is more common in females than in males.

Plus, hey guys, girl chimps make toys! How cool is that?