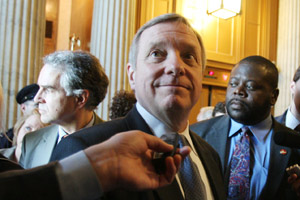 In the wake of the liberal revolt over Barack Obama’s tax bargain, some senior Democrats have begun rising to the president’s defense. When news of the deal first broke, there were only a small number of centrist Democrats openly willing to defend the proposal and the White House’s leadership in striking the deal with Republicans. In both the House and Senate, Democratic members seethed at the president for criticizing his own party for letting ideology trump pragmatic solutions. But a growing chorus of liberal economists and analysts have since concluded that the package is better than they might have expected under the political circumstances. And on Wednesday morning, Senate Majority Whip Richard Durbin (D-Ill.)—the second-ranking Democrat in the Senate—defended the president for making “what he thinks is the best decision in terms of keeping the economy strong.”

Durbin noted that he was still undecided about whether to support the tax proposal, noting that there were still “provisions in there that trouble me greatly and trouble many members of my caucus.” But he said that he sympathesized with the “horrible dilemma” that the president faced. He insisted, moreover, that Obama had not excluded congressional Democrats from the negotiating process, noting that the presdient had brought leaders from both sides together only two weeks earlier to discuss the issue. Durbin, moreover, told reporters off the Senate floor that Democrats themselves had invited the president to intervene:

Many leaders in Congress said to the president, “You reach an agreement, find out what you can do, then come to us.” It isn’t as if [Obama] didn’t make an offer to be inclusive. They basically said, “you need to lead,” and he did.

Durbin’s words lie in stark contrast to those of both liberal and rank-and-file Democrats who have accused the president of caving to Republican priorities and ignoring liberal voices in the negotiating process. But by all accounts, it looks like this is basically the deal that Democrats will have to live with, aside from some tweaks that Senate Majority Leader Harry Reid may push through. In addition to Durbin and Sen. Ben Nelson (D-Neb.), Joe Lieberman (I-Conn.), Bill Nelson(D-Fla.), and Tom Carper (D-Del.) have also publically praised the deal. Though liberals will certainly vote against the package, a growing number of Democrats are likely to join them in defending Obama as the details are worked out and heads cool.