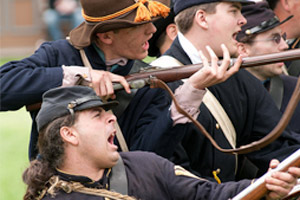 Last week, when an unidentified Democratic lawmaker muttered “fuck the president” during a House caucus meeting, it was clear that a full-scale revolt was underway among liberals enraged over the president’s tax-cut compromise with the Republicans. And the White House fired back. Vice President Joe Biden lit into Rep. Anthony Weiner (D-N.Y.) for slamming Obama as a “negotiator-in-chief” instead of a leader. “There’s no goddamned way I’m going to stand here and talk about the president like that,” Biden reportedly said. It looked like civil war.

Such infighting has left many liberals worried (and conservatives gleeful) that the Democratic Party is profoundly demoralized and divided just as the victorious GOP swoops in to claim its new majority in the House. But for all the teeth-gnashing and bellyaching on the left over the past week, there could ultimately be an upside to the civil war—not just for Obama, but for a Democratic Party that is struggling to regroup after its 2010 “shellacking.” The heated battles have prompted both liberal and centrist Democrats to articulate and fiercely defend the party’s guiding principles—a fight that’s the first sign of life on the left since Democrats got rolled last month.

“This is first time they’ve been able to speak out [as Democrats],” says Steve Murphy, a Democratic consultant. During the midterms, for example, the party frequently muddled its own message when it came to the Democratic platform. Fearing a tea party-fueled backlash, many vulnerable Democrats distanced themselves as much as possible from their own party’s accomplishments and agenda—and lost anyway.

Now, both liberals and centrist Democrats have stepped back up to the bully pulpit to underscore the party’s commitment to the unemployed, poor, and working class. Take Sen. Mary Landrieu (D-La.), a centrist not typically inclined to launch into populist tirades. She joined Sen. Bernie Sanders (I-Vt.) in slamming the tax breaks for the wealthiest Americans. “I’m taking this stand because it borders on moral recklessness,” Landrieu said, predicting that the deal would come at the expense of the poor. Pointing to Landrieu’s outspoken opposition, one progressive strategist says, “This is going to help Democrats be Democrats again.”

The defiant Dems are unlikely to halt the tax bill—which is predicted to pass the Senate as early as Tuesday with major GOP support—let alone force changes to the legislation. But the fight has forced the Democratic Party to grapple with the fundamental question of what it stands for.

The party faced a similar situation the last time there was a huge civil war on the left—one that concluded with Obama’s biggest legislative accomplishment to date. The battle over the public option elicited many of the same fears. Critics on both sides painted liberal hardliners as whiny, immature, and myopic, and some Democrats genuinely worried that the liberals’ demands could end up derailing the entire health care bill. As in the current fight, liberals also felt that Obama was giving in too easily. In the end, public option advocates neither won their fight nor brought down health care reform.

But the fight over the public option strengthened Democrats’ overall emphasis on insurers and influenced the message the party used to get the legislation across the finish line. When the insurance lobby turned against the bill in the spring, Obama finally did what public option critics had been calling for the whole time: He took the gloves off and cast big insurers as Public Enemy No. 1. “The public option debate focused a lot of attention on the role of insurers and the dangers they pose…when some Democrats started to realize it wasn’t going to be in the bill, they became more focused on how you regulate the existing system,” says Peter Harbage, a California-based health care consultant and former advisor to John Edwards. “I think it re-energized the debate and refocused the debate.” Even liberals who vowed to vote against health reform without the public option ultimately supported the bill, adding to the momentum that helped convince hold-out moderates to jump on board.

It’s unlikely that most House Dems complaining about Obama’s tax cuts compromise will turn around and support it. But the proposed temporary extension of the tax cuts will expire in 2012, which will force the Democrats to confront the issue head on in two years. If the economy improves, Obama will be in a better position to fulfill his vow and push for the expiration of Bush-era tax cuts for the highest earners—potentially turning the issue into a centerpiece of his re-election campaign. The revolt that seems to be tearing the party apart could also be laying the groundwork for the Democrats to define themselves in opposition to the GOP.

To be sure, Democratic disunity could still undermine the party if defiant liberals continue making the White House, rather than the GOP, the primary villain. And Obama himself will have to do more to heal the breach after publically assailing and privately shunting aside liberal Democrats who’ve opposed him on the tax deal. But though this intraparty battle is messy and impolitic, it’s also forced the party to do some soul-searching after an electoral thumping. To that end, it could still be a fight worth having.