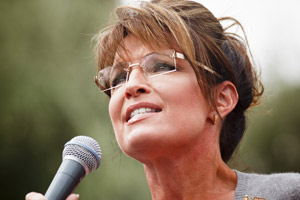 CNN today announced that it would team up with the Tea Party Express to host a GOP presidential debate over Labor Day next year in Tampa, the site of the Republican National Convention in 2012. Sam Feist, CNN’s political director, says the arrangement was designed to give undecided voters a way to educate themselves about “diverse perspectives within the Republican Party, including those of the Tea Party.” It’s not the first time CNN has partnered with the group. Earlier this year, CNN embedded with Tea Party Express on one of its bus tours, giving the group extensive coverage. But this joint venture is odd for two reasons.

Reason No. 1. The Tea Party Express isn’t exactly a grassroots activist group. It’s a political action committee created by longtime California GOP political consultants with the firm of Russo Marsh. The PAC has been criticized for raising gobs of money and spending most of it on the services of the consulting firm that founded it. Last year, grassroots tea party activists were up in arms over federal elections filings showing that the PAC had spent donor money lavishly, not on candidates, but on its operators. One particularly outrageous item, by tea party standards: a nearly $1,600 tab for a small meal at a fancy steakhouse in Sacremento. In 2009 almost $900,000 of the $2 million raised by the PAC went to Russo Marsh.

Reason No. 2. TPE has a special relationship with one potential presidential contender: Sarah Palin. The PAC campaigned for Sen. John McCain and Palin in 2008—which was natural for a conservative, Republican-leaning outfit. But it went the extra mile for Palin after the election, running ads that thanked Palin for her service. (The ads didn’t thank McCain.) The PAC’s coordinator at the time explained that the group believed “there has been an absence of a pro-Palin cohort….This woman’s reputation is going to be so damaged that she can never be a national political figure.” He said that the goal of the ad was to “preserve her options.” News outlets reported that the PAC founders hoped the ads would encourage Palin to run for president. This past year, TPE featured Palin at several of its events during the midterm campaigns. She helped kick off one of its bus tours at a rally in Searchlight, Nevada, where she slammed Sen. Harry Reid, who was in the midst of a tough reelection fight.

CNN’s announcement of its unusual debate deal with TPE drew surprised reactions. Politico‘s Ken Vogel tweeted, “Can’t remember a TV net collaborating w/ a PAC on a debate before.” GOP consultant Mindy Finn tweeted, “Think CNN trying to build up their conservative street cred?” But the partnership is problematic. CNN, which promotes itself as a mainstream and straight-news outfit, is officially hooking up with an outfit that’s been accused of astro-turfing and of cashing in on the tea party movement. And this group clearly has a bias toward Palin, who might be one of the participants in the debate. Can TPE be a neutral party in the 2012 GOP contest if Palin is part of it?

Given all these liabilities, should CNN have invited the Tea Party Express to join the “best political team on TV”? It seems that when it comes to which outfit has the most to gain from this arrangement credibility-wise, TPE has outfoxed CNN.