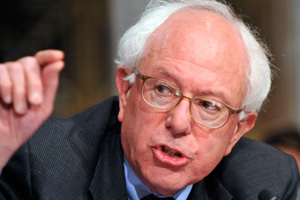 At 10:24 on Friday morning, Senator Bernard Sanders, an independent from Vermont and self-described socialist, took to the podium in the Senate to denounce the Obama/GOP tax accord. He did not leave for another eight and a half hours. His old-school filibuster, which technically wasn’t a filibuster at all, was ignored or downplayed by much of the media. But that didn’t stop it from going viral. By early evening, Sanders’ name had become the second-most-popular term on Google and tops on Twitter, where untold thousands rallied to his cause under the hash tag #filibernie.

An impassioned tirade of the sort that many liberals had once hoped to hear from the president, the speech was even more interesting in chunks larger than 140 characters. In the (likely) event that you didn’t have time to listen to the whole thing, here are some of best excerpts:

On why Sanders was launching a “filibuster” of the tax agreement:

I think everyone knows, the president of the United States, President Obama and the Republican leadership have reached an agreement on a very significant tax bill. In my view, the agreement that they reached is a bad deal for the American people. I think we can do better, and I am here today to take a strong stand against this bill, and I intend to tell my colleagues and the nation exactly why I am in opposition.
You can call what I am doing today whatever you want. You can call it a filibuster. You can call it a very long speech. I’m not here to set any great records to make a spectacle. I am simply here today to take as long as I can to explain to the American people the fact that we have got to do a lot better than this agreement provides.
This nation has a record-breaking, $13.8 trillion national debt at the same time as the middle class is collapsing and poverty is increasing. It seems to me to be unconscionable, unconscionable for my conservative friends and for everybody else in this country to be driving up this already too-high national debt by giving tax breaks to millionaires and billionaires who don’t need it and in some cases, Mr. President, don’t even want it.

On Obama’s duty as president:

President Obama has said that he fought as hard as he could against the tax breaks for the wealthy and for the extension of unemployment. Well, maybe, but the reality is that that fight cannot simply be waged inside the Beltway. Our job is to appeal to the vast majority of the American people to stand up and to say, “Wait a minute, I don’t want to see our national debt explode. I don’t want to see my kids and grandchildren paying higher taxes in order to give tax breaks to millionaires and billionaires.” The vast majority of the American people do not support that agreement in terms of giving tax breaks to the very rich. And our job is to rally those people.

There is a war going on in this country, and I am not talking about the war in Iraq or the war in Afghanistan. I am talking about a war being waged by some of the wealthiest and most powerful people in this country against the working families of the United States. Against the disappearing and shrinking middle class of our country. The billionaires of America are on the war path. They want more, and more, and more. And that has everything to do with this agreement reached between the Republicans and the president.

On how badly everyone else is hurting:

The United States of America has the highest rate of childhood poverty in the industrialized world. Is this America? The United States today has over 20 percent of its kids living in poverty…. Here’s the Netherlands, in second place, looks to me about 7 percent.
According to the Washington Post, middle income families made less in 2008, when adjusted for inflation, than they did in 1999. In other words, the American economy has turned into a nightmare for tens of millions of families…. You are seeing the middle class collapsing. And what this agreement says is that we are going to provide huge tax breaks for millionaires and billionaires. That is insane. And only within the Beltway could an agreement like that be negotiated.

Our friends on Wall Street, whose greed and illegal behavior caused this recession, they are now making more money than they ever did after being bailed out by the middle class of this country. During the Bush years, the wealthiest 400 Americans saw their incomes more than double. Do you really think that after seeing a doubling in the Bush years of their incomes that these people are in need of another million-dollar-a-year tax break?

How can I get by on one house? I need five houses, ten houses! I need three jet planes to take me all over the world! Sorry, American people. We’ve got the money, we’ve got the power, we’ve got the lobbyists here and on Wall Street. Tough luck. That’s the world, get used to it. Rich get richer. Middle-class shrinks…
So these crybabies, the multimillionaires and billionaires, these people who are making out like bandits, they are crying and crying and crying, but their effective tax rates for the top 400 income earners in America was cut almost in half from 1992 to 2007. The point that needs to be made is when is enough enough? That really is the essence of what we are talking about. When does greed—and greed is, in my view, it’s like a sickness, it’s like an addiction. We know people on heroin, they can’t stop, they need more and more.
I would hope that for these people who are worth hundreds of millions of dollars, they will look around them and say, “There is something more important in life than the richest people becoming richer when we have the highest rate of childhood poverty in the industrialized world.” Maybe they will understand that they are Americans, part of a great nation which is in trouble today. Maybe they’ve got to go back to the Bible or whatever they believe in understanding that there is virtue in sharing, in reaching out, that you can’t get it all.
How can anybody be proud to say that I am an multimillionaire and I’ve been getting a huge tax break and one-quarter of the kids in this country is on food stamps?

On Reaganomics’ flop at the box office:

For my friends, my Republican colleagues, to tell me that we need more tax cuts for the very rich, because that’s going to create jobs, that’s what trickle down economics is all about. What I would say to them is: Ya had your chance! It failed! In case you don’t know, losing 600,000 private sector jobs in eight years is not good. That’s very, very bad. That’s an economic policy that is bad. We don’t need to look at that movie again. We saw it. It stunk! It was a very bad movie!

On the gulf between lawmakers and the poor:

Do you know what dented can stores are? Most members of the House and Senate, and governors, do not get their meals from dented cans. But millions of Americans do.

Obviously it is a lot cheaper for the American companies to set up plants in China, hire Chinese workers at 50 cents an hour or 75 cents an hour or whatever it is, and have them build products for the Chinese markets than it is to pay American workers $15 an hour, $20 an hour, provide health insurance, deal with the union, deal with the environment. You know, that’s not a great revelation. I think anyone could have figured that one out, but you know, the big money interests around here, they pushed it, and Congress and President Clinton at that time signed it and we were off and running.

On how we should be spending the tax-cut money instead:

The Federal Highway Administration reports that $130 billion must be invested annually for a 20-year period to improve our bridges and the operational performance of our highways. At present, Mr. President, one in four of the nation’s bridges are either structurally deficient or functionally obsolete…. We need to improve our infrastructure, and when we do that, we can create millions of jobs.

After speaking for eight and a half hours:

For the latest reactions to the Filibernie, check out this update.