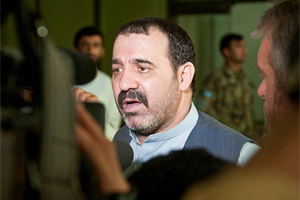 A crucial front in the Afghanistan war is the Kandahar region in the southern part of the country. A crucial player in that area is Ahmed Wali Karzai, the younger half-brother of President Hamid Karzai. He is the chief of the provincial council—which means he essentially runs the place—and he’s long fought off charges that he’s a drug-dealing warlord (even claiming the US Drug Enforcement Agency has cleared him of this accusation, though it hasn’t).

Now, the latest WikiLeaks dump of classified US State Department cables shows that AWK—as he’s called—is in low repute among Americans officials, who nevertheless figure they have no choice but to work with him. In a October 3, 2009, cable to Foggy Bottom reporting on a meeting Frank Ruggiero, the embassy’s senior civilian representative for southern Afghanistan, held with AWK, the US embassy in Kabul wrote, “While we must deal with AWK as the head of the Provincial Council, he is widely understood to be corrupt and a narcotics trafficker.”

During that meeting, AWK shared suggestions that would seem to benefit, well, AWK. According to the cable—classified “confidential”— he “cautioned against the use of small scale projects and additional cash-for-work-programs.” He wanted big infrastructure projects, which would result in lots of cash being passed around and which would be controlled supposedly by local elders. He also proposed, the cable said, that all the local militia commanders providing security to convoys and projects in the area be brought “under one umbrella in Kandahar, with one person given the license for the private security sector.” The cable noted, “AWK is understood to have a stake in private security contracting, and has aggressively lobbied the Canadians to have his security services retained for the Dahla Dam refurbishment. Both he and the governor have tried to exert control over how contracts are awarded in the province.”

The cable summed up the face-to-face by implying AWK was corrupt:

The meeting with AWK highlights one of our major challenges in Afghanistan: how to fight corruption and connect the people to their government, when the key government officials are themselves corrupt. Given AWK’s reputation for shady dealings, his recommendations for large, costly infrastructure projects should be viewed with a healthy dose of skepticism.

The cable did not suggest what ought to be done with or about AWK.

Months later, on February 23, 2010, Ruggiero again met with AWK, according to another cable, and AWK, unprompted, raised the allegations of his participation in narcotics trafficking. He offered to take a lie-detector exam and, the cable said, “dismissed the narcotics allegations as part of a campaign to discredit him, particularly by the media, saying the allegations are “like a spice added to a dish to make it more enticing to eat.'” The cable did not record any response Ruggiero made to AWK about this. But the cable—classified “secret—ended up with not a positive assessment of the president’s brother:

AWK was eager to engage and rarely stopped talking in the two hour meeting. While he presented himself as a partner to the United States and is eager to be seen as helping the coalition, he also demonstrated that he will dissemble when it suits his needs. He appears not to understand the level of our knowledge of his activities, and that the coalition views many of his activities as malign, particularly relating to his influence over the police. We will need to monitor his activity closely.

WikiLeaks’ initial release is rather selective. These are the only two cables in its first batch that come from the US embassy in Kabul. (WikiLeaks will be releasing 251,287 documents in stages over the next few months) Consequently, the documents offer snapshots—not a full picture—of the US government’s interactions with and worries about AWK, who still plays a pivotal role in a pivotal area. But these two cables do explicitly illustrate one of the profound challenges of the Obama administration’s Afghanistan policy: how to succeed in a war when you don’t trust your partners.