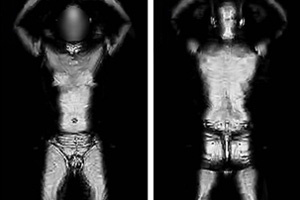 This week, I was hit by the social media onslaught of this man’s trouble with the TSA at the San Diego airport. Would-be traveler John Tyner of Oceanside, California, wasn’t too happy about the new “enhanced” pat-downs the agency rolled out nationally on November 1. The new guidelines let TSA officers feel passenger’s genitals with their hands if they refuse to go through the high-tech body scanner. Tyner told the agents he was fine with going through the metal detector, but didn’t want to be scanned. Agents told him if he didn’t get scanned, he’d have to be patted down. Tyner didn’t want to be groped, especially as the man in front of him in line had been allowed to opt-out of the scanner without receiving a pat-down. Exact words: “If you touch my junk, I’m gonna have you arrested.”

After arguing with the agents, Tyner decided not to fly after all—but they wouldn’t let him leave the screening area. He was allegedly told that he would have to submit to a pat-down or be subject to a $10,000 fine and a civil suit. Despite the threats, Tyner eventually did leave the airport unmolested—and took his tale to Fox News. The TSA has said it is now investigating Tyner. “He’s violated federal law and federal regulations, which states once you enter and start the process you have to complete it,” San Diego TSA security director Michael Aguilar told CNN.

Tyner isn’t the first person to object to the creepy pat downs, but he’s one in a string of men whose stands against on TSA groping have stirred up a lot of anger. The New York Times‘ Joe Sharkey and the Atlantic‘s Jeffery Goldberg also went through the process, which some observers consider a punitive measure. Sharkey’s opt-out request resulted in loud, embarrassing shouts of “opt-out!” by the agents—and despite TSA claims that the new body scanners do not produce graphic images, Goldberg discovered that agents at the Baltimore airport refer to it as a “dick-measuring device.”

It’s great to see these men taking a stand against what some have deemed TSA-sanctioned sexual assault, but I have to wonder why it’s taken so long for people to catch on to how invasive the searches are. For years, women have complained about agents copping a feel: In 2004, when the TSA first experimented with gropey pat-downs, hundreds of women were complaining. Now that a bunch of guys are calling foul, the media is suddenly all over it. Tyner’s story went viral, but what about the stories of women—and children—that’ve stayed relatively quiet? Here’s a sampling of some recent stories about TSA getting overly frisky from women:

• Dayton, Ohio: While traveling solo with her baby, one woman blogs, she was given a gropey pat-down without first being told which areas the agent would touch in advance, a violation of the protocol. Her baby waited in a carrier, she wrote, while the screener touched her labia and left her feeling violated and shaking. This pat-down was not an alternative to a scanner, because Dayton doesn’t have a scanner.

• A female staffer for Alex Jones’ radio show described how she was given the ridiculously thorough pat-down by a male screener. When he moved on to do the same to the woman’s 20-month-old and eight-year-old daughters, she had to stop him and request a female TSA agent. Afterward, she had to explain to her daughter why she had been touched in such a matter.

• Amarillo, Texas: A woman sued the TSA after an agent pulled down her blouse, revealing her breasts, during a pat-down. TSA employees laughed and joked about the incident, even after the woman started crying.

• Minnesota: A woman who is a rape survivor got an enhanced pat-down from a male TSA agent after opting out of the scanner. She says her breasts were cupped and squeezed, but she started breaking down when he began moving his fingers over her face and hair.

The TSA has claimed repeatedly that the scans are not graphic, cannot be stored, that there is “no fondling, squeezing, groping, or any sort of sexual assault taking place at airports,” that pat-downs will be conducted by same-sex officers, and that they improve passenger safety. All of these claims have been proven, at one time or another, false.

Although you are much more likely to die in a car crash en route to the airport than die in a terrorist attack, Homeland Security chief Janet Napolitano insists that the pat-downs are key to a “multi-layered approach” needed to fight terrorism and that (basically) Americans should submit to being scanned or groped or face being blown up. Finally, finally it appears that the public has had enough of this bull-honkey—pilots and flight attendants too. No one wants terrorists on airplanes, but there are plenty of ways to fight it that don’t include a policy of grope-y until proven innocent.

The touchy-feely policy the TSA enacted back in ’04 was ultimately recalled due to public outrage—and the implementation of whole-body scanners. “The better answer is millimeter wave or backscatter, which will have privacy protections and will allow people to go through without enhanced pat downs,” TSA Administrator Kip Hawley told Congress. Although he may not have anticipated that so many people would opt-out, Hawley did know that the public would be resistant to genital pat-downs. So why did the TSA think that people would be any more accepting of those same pat-downs just a few years later?

Actually, if it hadn’t been for the critical mass of angry dudes, the agency might have gotten away with it.