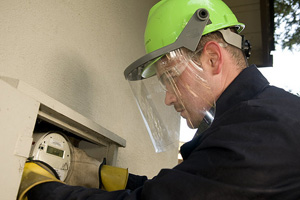 David’s been writing lately about the intersection of technology and human habits and culture, arguing that energy is a behavioral challenge as much as a technological one. There’s a prime of example of how these things collide—and why climate hawks should pay attention—in the backlash against smart meters in California.

The New York Times is the latest to cover the trend of residents responding in outrage when utilities install smart meters—home-energy computers that provide detailed information on what appliances you’re using, and when. They’re a necessary element in building a clean-energy grid that relies on wind and solar power, feeds electric cars, and supports greener dishwashers and other appliances (here’s a good backgrounder).

California utility PG&E has been a national leader in rolling out the devices. It’s also faced the strongest revolt.

Complaints about the meters have led to class-action lawsuits, calls to suspend the rollouts, and protests at farmer’s markets. Some opponents even tried to link the meters to the San Bruno natural gas explosion that killed eight people and destroyed 35 houses, according to a utility executive’s complaint. The protests tend to come in with jumble of reasons, but there are three kinds of objections: price, health, and privacy.

Residents in California’s hot central valley argued that their cooling bills spiked when meters were installed—because they did. An independent review found that their previous meters were undercharging them. The smart meters merely corrected the error. No ripoff there, though it’s small comfort to the homeowners.

“I’ve done two tours in Iraq, and when I come home I’m getting ripped off by my electric meter,” Army Sergeant John Robertson 2nd told the Times.

The health complaints come from opponents who believe smart meter antennas emit radiation that can cause brain tumors. No research backs up this claim, but, like claims about harmful radiation from cell phones, it’s difficult to disprove completely, as a recent Harper’s Magazine phone investigation found. PG&E says the meters transmit only about 45 seconds a day, are outside of the house, and have relatively weak radio signals—so they’re probably safer than cell phones, GPS devices, and wireless routers. (They may harm you, but so does everything else.)

The privacy concerns are the thorniest ones. The point of the meters is to collect vast amounts of user data that will let homeowners do more with less energy. That digital network—just like online banking or online voting—has triggered Big Brother anxiety that threatens to become a major barrier to the smart grid.

“Quite frankly you really don’t need to know if I ran my margarita blender 40 times in one night,” one commenter put it.

As Katie Fehrenbacher of Earth2Tech notes, the objections are a problem because the benefits of smart meters, while significant, aren’t very clear to ratepayers:

Working with the cable company is really annoying; they seem to take forever; their customer service lines are abysmal; yet at the end of the irritating journey, you have an Internet connection that brings you all your favorite web content. After you get your smart meter, what do you get? Oh, the ability to cut down on your energy consumption. Not so fun.

So that’s where things stand.

Behavioral researcher Doug McKenzie-Mohr suggests there’s no silver bullet to getting people to adopt new sustainable behaviors. It requires patience, careful communication, carefully designed pilot programs, and research into what mental associations new concepts may trigger (that’s why we get home-energy “reviews” or “check-ups” instead of “audits”).

Mailing out brochures isn’t going to put everyone’s concerns to rest, because their worries are less about information than about adjusting to change.

Fehrenbacher’s whole story at Earth2Tech, “Why the Smart Meter Backlash Story Isn’t Going Away,” runs through a list of ominous reasons why the dilemma will stick around. It’s worth reading.

There are two ways to think about the PR challenge of smart meter going forward, one cheery and one gloomy. Global warming speech-givers are fond of saying that our choice is not between sustainability and the status quo; it’s between sustainability and Detroit/Mogadishu/Pakistani floods (pick your social-collapse metaphor). In the same vein, Duke Energy CEO Jim Rogers says our choice is between a wired clean-energy network and utility rates that will rise 20 to 40 percent in the coming decades to replace aging power plants. The status quo isn’t an option—that’s the gloomy conclusion.

Among other infantilizing features of modern American life is the fact that we are passive, thoughtless consumers of energy, forever suckling at a far-away teat, whether it’s foreign oil producers or politically connected corporate behemoths. We send money out of our communities; someone sends power in. We are as dependent as sheep.

One step toward regaining our sense of civic engagement and self-determination would be to widely distribute the means of making and managing energy, to empower bottom-up rather than top-down innovation. Our communities can never truly govern themselves if they have no control over their own power. Let China have the Three Gorges Dam. Let’s show the world, again, that democracy can work.

Smart meters can help Americans become not just consumers but energy managers and producers (through, say, rooftop solar panels). If you buy this perspective, adding info-tech to your home’s energy system isn’t disempowering at all. It’s an expression of democracy. That’s a bit more hopeful.

This post was produced by Grist as part of the Climate Desk collaboration.