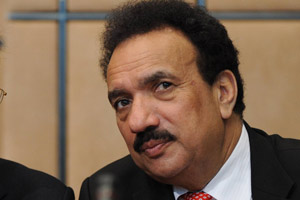 On Sunday, Asian News International quoted Malik in a story accusing TI Pakistan, Transparency International’s local affiliate, of acting like a “detective agency.” Malik also made a not-so-veiled threat to kick the group out of the country. This comes just weeks after TI released its 2010 Corruption Perceptions Index. Pakistan’s score of 2.3 out of 10 didn’t exactly endear the group to Zardari and co.; it’s barely better than Libya’s (2.2), and only a slightly higher than the Democratic Republic of Congo’s (2), and places Pakistan as the 34th most corrupt country out of the 178 surveyed.

Zardari and Malik’s problems with TI stem from the five-year, $7.5 billion aid package the United States began delivering to Pakistan last year. At least half of that money, the Wall Street Journal reports, will be funneled directly through government ministries, rather than foreign aid groups and contractors. That’s a heavy chunk of change to leave floating around the brackish bureaucratic backwaters of Pakistan. The US, justifiably skittish about the arrangement, signed an agreement with TI Pakistan in September that is intended to help ensure that the money gets where it’s supposed to go.

But by early November, the transparency advocates were already running into problems. That month, TI Pakistan wrote to Zardari and US Ambassador to Pakistan Cameron Munter to complain about threats against the group’s local chairman, Syed Adil Gilani, and his staff. TI Pakistan urged Zardari to guarantee the rule of law and freedom and safety to all TI staffers based in Pakistan. From the Journal:

Gilani . . . said he received death threats recently from “high-level” government officials urging him to stop his organization’s anti-graft investigations, including plans for [a] graft hotline. He declined to name the source of the threats. “They don’t want TI Pakistan to monitor” the US aid flows into the country, Mr. Gilani said in an interview.

For Pakistan, more “detectives” means more scrutiny. It’s unclear whether Zardari knew that that $7.5 billion would come with such a sizable asterik. TI’s next move: to circumvent the Zardari administration altogether. In a letter to Pakistani Supreme Court Chief Justice Iftikhar Muhammad Chaudhry, the group again expressed its concerns about the government’s plans, arguing that it “should be protected from illegal or extrajudicial acts to fetter its anti-corruption work.” In a press release on the matter, TI cites reports of government officials calling on all ministries, divisions, and departments to sever contact with TI Pakistan.

Packages like the one TI oversees are the sugar that make the bitter pill of war a little easier to swallow. Without such aid, it becomes harder for the Pakistani government to justify helping the US, and to sell its citizens on the idea that having thousands of Americans in the region serves a common interest. But without at the least the appearance of oversight, it becomes almostly politically impossible for the Obama administration to continue feeding the aid stream. Giving TI the job of keeping everything above board is the crucial variable in the Pakistan equation. Without it, the United States’ uneasy alliance with the country could fall into jeopardy.