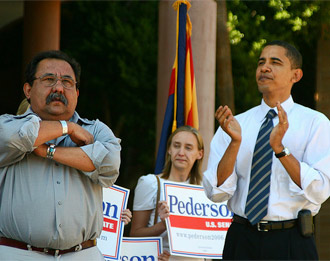 Rep. Raul Grijalva (D-Ariz.) may have barely survived the 2010 elections, appearing to have squeaked by his Republican opponent, Ruth McClung, in a race so tight that votes were still being counted on Wednesday. Just two years ago, Grijalva crushed his opponent by 30 points. This election season, though, he became a lightning rod due to his outspoken opposition to Arizona’s harsh immigration law, receiving death threats, an envelope of suspicious white powder, and a bullet through the window of his district office.

Victorious Republicans insist the results of Tuesday’s election give them a mandate to shove Washington to the right. But rather than make such concessions, Grijalva, co-chair of the House Progressive Caucus, believes the House Democrats left standing after this year’s epic wipeout must defend liberal ideals more fiercely than ever. In an interview on Wednesday, Grijalva vowed that House progressives would block any proposal that compromised their values—and he criticized President Obama for taking an accomodating approach to Republican lawmakers bent on obstructing his agenda.

“I think the President is going to try to accommodate [House minority leader John] Boehner…but we can’t have this caution, this slow-walking,” Grijalva said. Instead, he continued, Obama “has to be an activist president”—one who “has to say no” to the Republican agenda. By contrast, the president struck a conciliatory tone with Republicans during his first press conference after the elections, describing the Democratic defeats as a “shellacking” that meant Americans weren’t satisified with the progress they made. He viewed to work with the GOP on energy and health care, and promising “to hear good ideas wherever they come from.”

Grijalva warned that members of his caucus would try to block any compromises with the Republicans that weren’t sufficiently progressive, even if it meant defying the White House. “Progressives in Congress need to behave like Democrats if the White House doesn’t want to behave…we can’t suddenly go from being survivors to concede to an agenda that’s not going to satisfy us. They shouldn’t pass [compromises] with our votes,” Grijalva said.

In what now looks like a 65-seat gain for House Republicans, congressional Democrats will lose a disproportionate number of Blue Dogs from conservative districts—half of whom were dumped on Tuesday—rendering the overall make-up of the caucus significantly more progressive. Similar was the case after the Democrats regained control of the House in 2006, picking off moderates but leaving members of the GOP’s right-wing flank, who were able to hold on in red districts.

In a way, Grijalva’s vision for House progressives carries echoes of the minority GOP’s “just say no” strategy over the past two years: “We’re going to be an obstacle to their agenda.” But Grijalva said that the public would not equate uncompromising progressives with obstructionist Republicans if and when they took such a stand.

“We have the moral advantage of defiance and opposition,” said Grijalva. He continued: “Progressives as naysayers are going to take the high ground and the moral imperative. If we lose, that’s an argument that needs to happen. I think compromise from an advantage of strength is wonderful, but compromising from a position of weakness is caving.”

In particular, the Arizona Democrat said, progressives would oppose big cuts to Social Security and excessive tax cuts for the wealthy, even if they were coupled with tax cuts for the middle-class. Grijalva also said that progressives would press for a quick withdrawal from Afghanistan, threatening to raise the issue during the next round of budget negotiations. “The policy’s a failure, and we have to protect both our national treasure and human treasure,” he said, adding that withdrawal “could be decided by the military budget as part of deficit reduction—it’s not off the table.”

In two weeks, the Progressive Caucus will regroup in Washington to elect their leadership for the new Congress and hammer out their strategy in two weeks’ time. Grijalva acknowledged there’s little hope of any legislation passing during the upcoming lame-duck session on Capitol Hill. But he insisted that his fellow progressives wouldn’t just be the new Party of No and would work on crafting their own legislative agenda. “It’s back to the basics—common-sense environmental protection and conservation, working families. We’ll go back to what got us in this dance.”