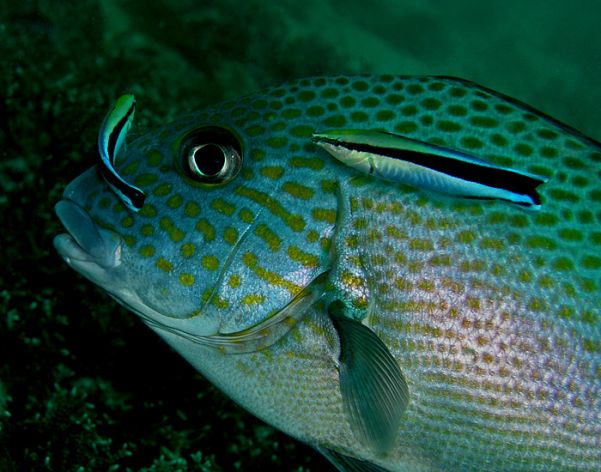 Two cleaner wrasses, Labroides dimidiatus, working a sweetlips. Photo by Nhobgood, courtesy Wikimedia Commons. New research out on one of my favorite subjects—cleaner fish and their mimics. For starters, here’s a smart video showing the world of cleaners—fish and shrimp—and their clients in the seagrass beds and coral reefs off Papua New Guinea.

Although half the animals waiting in line at a cleaning station are menu items for the other half, peace mostly prevails. That’s because everyone needs the ministrations of those who eat parasites and clean messy wounds. One researcher, Redouan Bshary, has been investigating the relationship between cleaners and their clients for some years. Here’s some of what I wrote about his findings in The Fragile Edge:

Cleaners do occasionally bite their clients too hard (some actually sneak a forbidden ?sh scale now and again), which can lead to them being chased away by the angry client. If the injured client returns later to this same cleaning station, the cleaner will spend the ?rst few moments backing gently into him and massaging him with undulating caudal ?ns. The client appears to enjoy this, and the researchers conclude that it is an attempt at reconciliation—an apology, if you will, and the ?rst of its kind seen in anything other than mammals on the order of primates, dolphins, sheep, goats, and hyenas. Bshary also discovered that cleaners are more likely to use caresses to mollify carnivorous ?sh who might eat them. But what of the nonpredatory client species, the vegetarians who can’t wield the ultimate threat? What is to stop the cleaners from nibbling their ?sh scales, or nipping a little muscle tissue, or slurping an energy-rich slick of mucus? Another study revealed that market forces shape the cleaner-client relationship. Curbing what might otherwise be an overwhelming temptation to imbibe some of the client’s protective mucus is the pressure of competition. Clients are less likely to visit cleaning stations where they have previously been cheated by the cleaner’s nibbling, or where they have had to wait in line. So even nonpredatory clients wield the big stick of consumer choice. 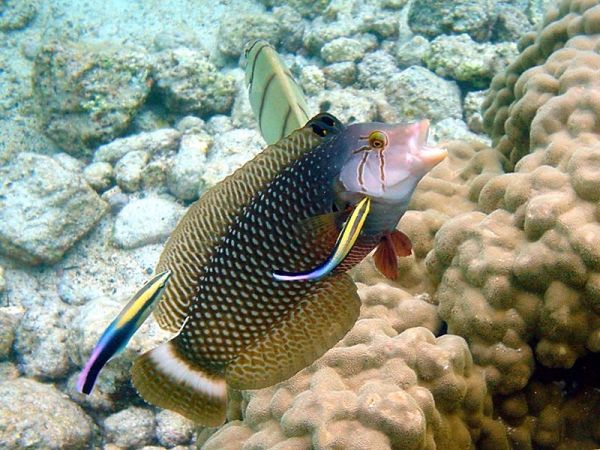 A dragon wrasse, Novaculichthys taeniourus, getting cleaned by rainbow cleaner wrasses, Labroides phthirophagus, on a Hawaiian reef. Photo by Mila Zinkova, courtesy Wikimedia Commons.
Of course all good things come with their attendant thieves and con-fish. Some fish mimic cleaner wrasses—and not for the benefit of the clients. Again, from The Fragile Edge:

If you spend long enough in the company of cleaners on the reef you might ?nd yourself a victim of one of the inevitable opportunists: the false cleaners, or mimic blennies, small ?shes who make their living as cleaner mimics (some only in their juvenile phase). These little predators look uncannily like cleaner ?shes, with blue stripes and long, narrow bodies. They even abandon their wriggly blenny swimming style for the cleaners’ characteristic rowing with the pectoral ?ns. Even more remarkable, some false cleaners have stolen the barbershop-pole display, the trademark of the cleaner wrasses, to lure the unsuspecting and the disheveled close by. When a victim falls for the ruse, the false cleaner charges, bites off a hunk of ?esh with fangs hidden in its underslung lower jaw, then runs to hide in a cranny. The scale-eating blenny is renowned for darting up from the substrate and nipping at passing divers.

I like the Twilight Zone aura of this video from the golden age of wildlife melodramas. At any rate, it’s a good illustration of the ways of the mimic blennies—even if it is a total set-up in a tank. (Question: Who cleans the mimics?)

Now Andrea Bshary and Redouan Bshary have a new paper out in Cell Biology describing how some victims of parasitic saber-tooth blennies spend valuable time and energy punishing their attackers by chasing them or biting them—even though there’s no getting back that lost flesh.

So when does it make sense to punish, given that punishment has immediate energetic costs to both the punisher and the punished?

Well, according to the Bshary’s experiments, the vengeful victims of blenny attacks serve themselves. That’s because in future attacks blennies are more likely to go after different individuals than those who took the time and expended the energy to punish them. Yet the vengeful victims also serve other member of their own species. That’s because, given a choice, blennies are more apt to switch to a different species of fish for their next attack if their previous victim punished them. Thus the vengeful victim creates a “public good.” A third tier of research showed that at least some blennies can tell the difference between look-alike pairs of victims in which one punished them and the other did not, and will selectively bite the nonpunishers. From the paper’s abstract:

A key challenge for evolutionary biologists is to determine conditions under which individuals benefit from a contribution to public goods. For humans, it has been observed that punishment of free riders may promote contributions, but the conditions that lead to stable cooperation based on punishment remain hotly debated. Here we present empirical evidence that public goods may emerge as a by-product of self-serving punishment in interactions between coral reef fishes and parasitic saber-tooth blennies that stealthily attack their fish victims from behind to take a bite. We first show that chasing the blenny functions as punishment, because it decreases the probability of future attacks. We then provide evidence that in female scalefin anthias, a shoaling species, punishment creates a public good because it increases the probability that the parasite switches to another species for the next attack. A final experiment suggests that punishment is nevertheless self-serving because blennies appear to be able to discriminate between look-alike punishers and nonpunishers. Thus, individuals that do [not?] contribute to the public good may risk being identified by the parasite as easy targets for future attacks.

[I’m assuming the “not” was left out of that final sentence…?]

‘Cleaner’ Pt. 2 from MORPHOLOGIC on Vimeo.