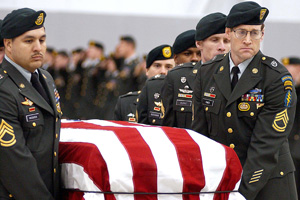 A new isolationism is metastasizing in the American body politic. At its heart lies not an urge to avoid war, but an urge to avoid contemplating the costs and realities of war. It sees war as having analgesic qualities—as lessening a collective feeling of impotence, a collective sense of fear and terror. Making war in the name of reducing terror serves this state of mind and helps to preserve it. Marked by a calculated estrangement from war’s horrific realities and mercenary purposes, the new isolationism magically turns an historic term on its head, for it keeps us in wars, rather than out of them.

Old-style American isolationism had everything to do with avoiding “entangling alliances” and conflicts abroad. It was tied to America’s historic tradition of rejecting a large standing army—a tradition in which many Americans took pride. Yes, we signed on to World War I in 1917, but only after we had been “too proud to fight.” Even when we joined, we did so as a nonaligned power with the goal of ending major wars altogether. Before Pearl Harbor in December 1941, Americans again resisted the call to arms, looking upon Hitler’s rise and other unnerving events in Europe and Asia with alarm, but with little eagerness to send American boys into yet another global bloodbath.

In the decades since World War II, however, “isolationism” has been turned inside-out and upside-down. Instead of seeking eternal peace, Washington elites have, by now, plunged the country into a state of eternal war, and they’ve done so, in part, by isolating ordinary Americans from war’s brutal realities. With rare exceptions (notably John F. Kennedy’s call for young Americans to pay any price and bear any burden), our elites have not sought to mobilize a new “greatest generation,” but rather to keep a clueless one—clueless, that is, as to war’s fatal costs and bitter realities—unmobilized (if not immobilized).

Such national obliviousness has not gone unnoticed. In a recent New York Times op-ed headlined “The Wars that America Forgot About,” former NBC news anchor Tom Brokaw asked the obvious question: Why, in an otherwise contentious political season, have our wars gone so utterly undebated? His answers—that we’re in a recession in which people have more pressing concerns, and that we’ve restricted the burdens of war to a tiny minority—are sensible, but don’t go quite far enough. It’s important to add that few Americans are debating, or even discussing, our wars in part because our ruling elites haven’t wanted them debated—as if they don’t want us to get the idea that we have any say in warmaking at all.

Americans Express Skepticism about War… So?

When you’re kept isolated from war’s costs, it’s nearly impossible to mount an effective opposition to them. While our elites, remembering the Vietnam years, may have sought to remove US public opinion from the enemy’s target list, they have also worked hard to remove the public as a constraint on their war-making powers. Recall former Vice President Dick Cheney’s dismissive “So?” when asked about opinion polls showing declining public support for the Iraq War in 2008. So what if the American people are uneasy? The elites can always call on a professional, non-draft military, augmented by hordes of privatized hire-a-gun outfits, themselves so isolated from society at large that they’ve almost become the equivalent of foreign legionnaires. These same elites encourage us to “support our troops,” but otherwise to look away.

Mainstream media coverage of our wars has only added to the cocoon created by the new isolationism. After all, it rarely addresses the full costs of those conflicts to US troops (including their redeployment to war zones, even when already traumatized), let alone to foreign non-combatants in faraway Muslim lands. When such civilians are killed, their deaths tend to take place under the media radar. “If it bleeds, it doesn’t lead,” could be a news motto for much of recent war coverage, especially if the bleeding is done by civilians.

Only the recent release of classified documents and videos by WikiLeaks, for instance, has forced our media to bring the mind-numbing body count we’ve amassed in Iraq out of the closet. If nothing else, WikiLeaks has succeeded in reminding us of the impact of our vastly superior firepower, as in a now infamous video of an Apache helicopter gunship firing on non-combatants in the streets of Baghdad. Such footage is, of course, all too personal, all too real. Small wonder it was shown in a censored form on CNN.

Where’s the benefit, after all, for corporate-owned media in showcasing others’ terror and pain, especially if it’s inflicted by “America’s hometown heroes“? Our regular export of large-scale violence (including a thriving trade in the potential for violence via our hammerlock on the global arms trade) is not something Americans or the American media have cared to scrutinize.

To cite two more willful blind spots: Can the average American say roughly how many Iraqis were killed or wounded in our “liberation” of their country and the mayhem that followed? In mid-October, US Central Command quietly released a distinctly lowball estimate of 200,000 Iraqi casualties (including 77,000 killed) from January 2004 to August 2008. That estimate (lower by 30,000 than the one compiled by official Iraqi sources) did not include casualties from major combat operations in 2003, nor of course did it have any place for the millions of refugees driven from their homes in the sectarian violence that followed. The recent WikiLeaks document dump on Iraq held at least another 15,000 unacknowledged Iraqi dead, and serious studies of the casualty toll often suggest the real numbers are hundreds of thousands higher.

Or how about the attitudes of those living in parts of Pakistan and Afghanistan subject to the recent upsurge of US drone strikes? Given the way our robotic wars are written about here, could most Americans imagine what it feels like to be on the receiving end of Zeus-like lightning bolts?

Here’s what one farmer in North Waziristan in the Pakistani tribal borderlands had to say: “I blame the government of Pakistan and the USA… they are responsible for destroying my family. We were living a happy life and I didn’t have any links with the Taliban. My family members were innocent…I wonder, why was I victimized?”

Would an American farmer wonder anything different? Would he not seek vengeance if errant missiles obliterated his family? It’s hard, however, for Americans to grasp the nature of the wars being fought in their name, no less to express sympathy for their victims when they are kept in a state of striking isolation from war’s horrors.

Once upon a time, America’s Global War on Terror was an analgesic. Recall those “shock and awe” images of explosions that marked the opening days of Iraqi combat operations in 2003. Recall as well all the colorful maps, the glamorous weapons systems, and the glowering faces of Osama bin Laden and Saddam Hussein interpreted and explained to us on our TV screens by retired US military officers in muftis. In this curiously sanitized version of war, weapons and other military arcana were to serve to ease our pain at the tragedy we had suffered on 9/11, while obscuring the “towers” of dead we were creating in other lands.

In fostering analgesic war and insisting on information control, our elites have, yet again, drawn a mistaken lesson from the Vietnam War. In Vietnam, even if it took years, free-to-roam and often-skeptical reporters finally began to question the official story of the war. Violent images came home to roost in American living rooms at dinnertime. Such coverage may not have stopped the killing, at least not right away, but it did contribute to a gutsy antiwar movement, as well as to a restive “silent majority” that increasingly rejected official rhetoric of falling dominoes and lights at the end of tunnels.

Iraq and Afghanistan, by way of contrast, have been characterized by embedded (mostly cheerleading) reporters and banal images of US troops on patrol or firing weapons at unseen targets. Clear admissions that our firepower-intensive form of warfare leads to the violent deaths of many more of “them” than of “us”—and that many of them aren’t, by any stretch of the imagination, our enemies—are seldom forthcoming. (An exception was former Afghan war commander General Stanley McChrystal’s uncommonly harsh assessment of checkpoint casualties: “We’ve shot an amazing number of people and killed a number and, to my knowledge, none has proven to have been a real threat to the force.”)

“We don’t do body counts on other people,” said a cocky Donald Rumsfeld late in 2003 and, even though it wasn’t true (the Pentagon just kept its body counts to itself), an obliging Pentagon press corps generally fell into line and generally stayed there long after our new wars had lost their feel-good sheen. Clearly, military and political elites learned it’s better (for them, at least) to keep vivid images of death and destruction off America’s screens. Ironically, even as Americans seek more lifelike and visceral representations from ever bigger, brighter, high-def TVs, war is presented in carefully sanitized low-def form, largely drained of blood and violence.

The result? Uncomfortable questions about our wars rarely get asked, let alone aired. A boon to those who want to continue those wars unmolested by public opposition, even if a bust when it comes to pursuing a sensible global strategy that’s truly in the national interest. In seeking to isolate the public from any sense of significant sacrifice, active participation in, or even understanding of America’s wars, these same elites have ensured that the conflicts they pursued would be strategically unsound and morally untenable.

Today, Americans are again an isolationist people, but with a twist. Even as we expand our military bases overseas and spend trillions on national security and wars, we’ve isolated ourselves from war’s passions, its savagery, its heartrending sacrifices. Such isolation comforts some and seemingly allows others free rein to act as they wish, but it’s a false comfort, a false freedom, purchased at the price of prolonging our wars, increasing their casualties, abridging our freedoms, and eroding our country’s standing in the world.

To end our wars, we must first endure their Gorgon stare.

William J. Astore, a retired lieutenant colonel (USAF), is a TomDispatch regular. His books and articles focus mainly on the military, technology, and society. Listen to a Timothy MacBain TomDispatch audio interview with Astore on what it felt like to come out of the military and learn how to write honestly about wars by clicking here, or download it to your iPod here. He welcomes reader comments at wjastore@gmail.com.