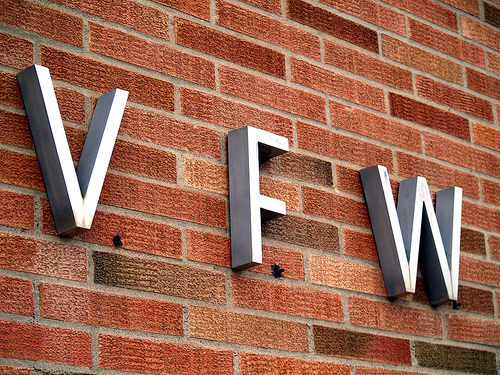 They’ve made it through Tarawa, Chosin, Khe Sanh, Desert Storm, and a whole lot more. But the Veterans of Foreign Wars are waging a new battle for survival this year: They’re fending off a mutiny by tea partiers.

The tea party movement enjoys strong backing from some armed forces vets, and many of its best-known congressional challengers have military bonafides. But none can boast of an endorsement from the 2.2 million-strong VFW, the nation’s largest advocacy group for combat veterans. As the march toward Election Day continues, the group’s PAC (which has a seperate leadership) is spurning tea party candidates—including at least one who’s a card-carrying VFW member—to endorse establishment politicians from both parties. As a result, the interest group is facing a mutiny within its ranks, one that goes all the way to the top. And angry VFW members might defect to newer vets’ groups dedicated to right-wing causes. “I’m calling it the VFW’s version of the tea party, in a way,” says one military blogger and disenchanted member of the organization. “It is apparent that they have gone so far off track at the national level, just like our elected officials, that they’ve lost touch with who really matters—local guys.”

From Hernando County, Florida, to Windsor, Connecticut, plenty of the VFW’s 8,000-plus local posts are happy to host tea party meetings for the dozens of GOP vets vying for House and Senate seats next month. But when the group’s political action committee released its latest slate of endorsements (PDF), none of those hopefuls made the cut. Not Joe Miller, the Sarah Palin-approved ex-soldier who’s already dispatched sitting Alaska Sen. Lisa Murkowski for the state’s GOP nomination. Not Ilario Pantano, an outspoken conservative former Marine and VFW member running for the House in North Carolina. And not Allen West, the Islam-criticizing Army vet who’s challenging a two-term Democratic congressman in a South Florida district. In all, at least 11 GOP tea party candidates (see a list below) with solid military credentials have been passed over by the VFW, even as it’s endorsed incumbents like Nancy Pelosi, Harry Reid, Barbara Boxer, and Jesse Jackson Jr. (The VFW’s also proven friendly to incumbent conservatives like John McCain, Chuck Grassley, and Joe “You Lie!” Wilson.)

Critics say the organization’s entire endorsement process is skewed toward incumbent candidates with legislative experience: According to VFW-PAC’s website (PDF), Senate candidates must cast at least seven votes for VFW-approved legislation to be endorsed; House hopefuls need 10 such votes. Nowhere does it explain how non-incumbents can fulfill those criteria. (Repeated calls to VFW-PAC weren’t returned.)

While Pantano’s candidacy has been somewhat controversial—he narrowly avoided a court-martial in Iraq for machine-gunning two men to death—it’s a bit of a surprise that the VFW wouldn’t circle the wagons around one of its own. Pantano and West—who himself exited the Army early after roughing up an Iraqi detainee—are tea party heroes, so-called “Jack Bauer” Republicans who have embraced their tough guy personas. Their snubbing has especially rankled freedom-lovin’ VFW members, according to two military bloggers who have led the charge against the group: Mr. Wolf of Blackfive and Jonn Lilyea of This Ain’t Hell. (Wolf, a current VFW member, asked that his real name not be used.)

“This has really energized the VFW membership, you can tell,” says Wolf, whose recent posts have exhorted readers to “BURN YOUR VFW CARDS!” He and Lilyea say about 90 percent of their (numerous) online comments come from vets are critical of the VFW, and other milblogs have gone viral with the brouhaha. “Supporting a non-vet over Lieutenant Colonel West was the last straw,” Wolf tells Mother Jones. Lilyea still can’t believe that West’s opponent, liberal Democrat Ron Klein, got the group’s seal of approval. “They’re backing a rich Boca Raton lawyer,” he says. “Given what the temperature of the country is at this point? To be backing Barbara Boxer, Alcee Hastings, Barney Frank, people that spoke out against the surge in Iraq?”

Lots of VFW members agree, and not just the rank-and-file ones. The Florida state commander, Pete Nicholsen, sent a broadside to VFW-PAC’s directors (PDF) warning of a “regional firestorm” over the group’s “arbitrary and capricious” endorsement process. “It is abundantly clear that the PAC has skewed this year’s endorsements towards incumbents,” he wrote. “By weighting selections toward the sitting members of Congress, you are encouraging complacency and taking discourse out of the political process.” Even the group’s national commander, Richard Eubank, is taking potshots at his group’s political arm: The VFW home page features a terse item, “VFW Leadership at Odds With VFW-PAC,” laying out the differences. “Obviously, an organization’s political positions have to reflect the opinions of its members,” Eubank writes. “But those opinions can’t be perceived as ‘off the wall.'” The post went on to say that “because of the controversy surrounding the endorsements, VFW line officers have decided to bring the question of continued existence of the PAC to the floor during the 112th VFW national convention in August.” Late Tuesday, Eubank issued a second statement that went even further than the first, this one demanding that his organization’s PAC executives “immediately rescind their endorsement actions.”

That may be too little, too late for vets in the lower echelons of the organization. Wolf and Lilyea point out that Eubank appoints the PAC’s executive director, and the rest of its board is approved by VFW leadership. “Legally and Financially, the VFW-PAC is a separate organization from the VFW, but let’s not kid ourselves, the two are closely related,” writes the editor of another conservative milblog, War on Terror News, noting, “the actions of the VFW-PAC are inexcusable.”

Here’s a list of notable tea party conservatives and military vets that the VFW took a pass on:

Meanwhile, there are a handful of astroturf right-wing groups, seeded by big conservative money and interests, for vets who’ve started to endorse the tea partiers—and they stand to gain clout with disaffected VFW members. West’s website boasts that he’s been “endorsed by Freedom for Vets PAC.” (Actually, he meant Vets for Freedom, a PAC run by former soldier and Bear Stearns banker Pete Hegseth that has deep GOP and Swiftboater ties.) Besides Vets for Freedom, there’s also Move America Forward, Combat Veterans for Congress, Gathering of Eagles, and others—all ready to cater to the military tea partier. “VFW CONTINUES BAD ENDORSEMENT BINGE,” Move America Forward’s PAC blog gleefully points out. “Shouldn’t groups like the NRA and VFW give preference to endorsing it’s [sic] own members wherever possible?”

Wolf’s not ready to defect just yet. While he personally is threatening to leave, “I don’t want to see the VFW get broke up,” he says, gruffly. And he’s not crazy about the alternatives: While he admires Hegseth’s group, he takes issue with Vets for Freedom’s political stridency and its legislative scorecard. Lilyea agrees, saying VFF’s right-wing litmus tests are ridiculous. “They’re gonna vote against a good bill that gives funding to veterans because it has some amendment for, I don’t know, $4 million for a NAMBLA monument or something,” he says, conjuring an extreme example of how VFF caricatures its political opponents.

If that’s the alternative, Lilyea says, he hopes the VFW will get out of politics altogether. He likens it to Afghanistan: “I’m not anti-war, but if you’re not in it to win the thing, then get the hell out of there.” But a withdrawal from the political theater is unlikely until the VFW gets some fresh blood. “Have you seen these guys? These members of the board of the PAC look like they rode with Pershing,” he says. “They don’t know what’s going on.”