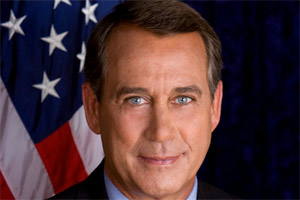 In anticipation of House Minority Leader John Boehner’s possible ascension to Speaker of the House, special interest groups have flooded his campaign coffers with cash. During the just-concluded third quarter, Boehner for Speaker—the Ohio Republican’s joint fundraising committee, which aims to put the House in Boehner’s hands—pulled in $1.9 million, while his own re-election committee took in $2.3 million, according to the Federal Election Commission. To put that figure into perspective: current Speaker Nancy Pelosi has raised $304,000.

Many of Boehner’s contributors, including big energy and industry groups, have been on the losing end of the legislative battles of the past several years, and are hoping for a Republican takeover that reverses that trend. They’re also traditional allies of the GOP, so it’s not surprising that these interests would send money Boehner’s way.

But the New York Times points out that:

[a]bout half of the 29 PACs that gave to Boehner for Speaker did not contribute to him or his leadership PAC during the 2008 election cycle, a telling sign of the newfound interest in Mr. Boehner’s power. About a third of the more than 160 PACs that directed donations to his personal campaign committee had not given to him in 2008 either.

Meanwhile, the Minority Leader is doing his best Don Vito impression and spreading the wealth to needy GOPers:

Mr. Boehner, in turn, has used his own fund-raising success to spur members of his caucus. At the final meeting of the Republican conference in late September, before Congress adjourned for the midterms, Mr. Boehner took out a $1 million check to the Republican Congressional campaign committee and placed it on the podium, according to Republican aides who were there. He vowed not to deposit it unless his fellow members came up with $3 million in pledges themselves. Members began lining up, with Mr. Boehner even calling out some by name. Soon they had exceeded his goal.

Republicans will likely argue that Boehner’s fundraising prowess demonstrate how valuable he is to the party. But it actually demonstrates how much value his corporate donors expect to get from his elevation.