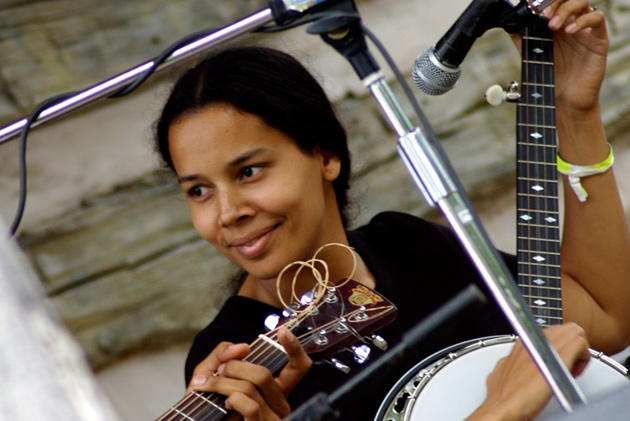 The Carolina Chocolate Drops are gettin’ hotter by the minute. This young North Carolina trio—solid multi-instrumentalists and protégés of 91-year-old African American fiddler Joe Thompson—have set out to revive the nearly extinct tradition of black old-time string bands. In their five years of existence, they’ve recorded five albums, toured with blues great Taj Mahal, performed on NPR’s Prairie Home Companion, were the first black string band ever to play the Grand Ole Opry—not that the Opry deserves them—and have been winning over new fans at a rapid clip.

The reason why was evident Friday at Slim’s in San Francisco, where I caught the Chocolate Drops the night before their debut at the Hardly Strictly Bluegrass fest. Following local openers The Stairwell Sisters, a thoroughly enjoyable five-woman old-time outfit—complete with clogging by Evie Ladin, who plays a mean clawhammer banjo—the Chocolate Drops got the crowd fired up rousing renditions of “Starry Crown” and “Don’t Get Trouble in Your Mind.” They followed up with a lengthy set in which none other than Mr. Mahal himself joined them onstage to pinch hit on the banjo.

These talented hipsters swap instruments like they’re going out of style, passing around banjo, fiddle, and jug duties. Justin Robinson simply shreds on that fiddle, Dom Flemons—the resident comic in his suspenders-and-bowler getup—makes his special magic on resonator guitar and the bones, and Rhiannon Giddens, in addition to playing fiddle and banjo, soars in the vocal department. On one number, she breaks out a kazoo and makes you realize that, with the right set of lungs behind it, it can be way more than a mere children’s toy. (She also gives any R&B diva a run for her money when she belts out the band’s unlikely cover of Blu Cantrell’s “Hit ‘Em Up Style” over Robinson’s human beatbox.

The Chocolate Drops also played the title track from their latest CD, Genuine Negro Jig, which defies expectations. Sparse—just fiddle and bones, with a bit of percussive stomping and clapping by Robinson—it’s a sound that could have come from anywhere you’d refer to as the “old country.” (Eastern Europe?) Flemons noted that it was copyrighted by the same white man, Daniel Emmett, who copyrighted “Dixie.” But he added that Emmett may have gotten both from the same Southern black family (the Snowdens) that now lays claim to “Dixie,” so it presumably did come from “genuine Negros.” Whomever wrote the song, it’s beautiful and haunting. (See video here.) The new album, out this past February, made Billboard’s Top 200 albums chart and hit No. 1 on the bluegrass charts. Longtime music author and critic Greil Marcus also told me that it’s his favorite release of 2010.

This is all by way of background, however. For a special section in our November/December print edition, we reached out to a wide variety of musicians, DJs, and critics to ask about their own listening habits and assorted other things. Among them was Rhiannon Giddens, and here’s what she had to say:

Mother Jones: What’s your favorite new release this year by an artist in your genre?

Rhiannon Giddens: I’m really taken with Calling Me Home by Alice Gerrard. She’s a great songwriter (the title cut is breathtaking) and a wonderful singer.

MJ: How about something completely outside of your genre?

RG: The audiobook of Artemis Fowl #6: The Time Paradox, by Eoin Colfer, narrated by Nathaniel Parker.

RG: That would be Theodore Northrupt’s “Plantation Echoes,” a ragtime piece that I am attempting to transcribe. I’ve listened to it so many times it never leaves now.

RG:
1. Sometimes When the Moon is High, by New England-based trio Nightingale.
2. Cousin Emmy and Her Kinfolks 1939-1947 — which is my 15-month-old daughter’s favorite record, so it’s a good thing I can listen to it over and over!
3. Take 6 (self-titled) — I’ve been listening to this since I was a child.

RG: Tie: Handel’s Messiah: A Soulful Celebration (sort of a gospel/soul take) and A Charlie Brown Christmas by the Vince Guaraldi Trio.

RG: Anything Tom Lehrer recorded. My favorite of his really political stuff is That Was the Year That Was—it’s really topical, so most of the material wouldn’t fly today, but he just had this brilliant way of skewering really disturbing things and making the milk come out of your nose while he was doing it.

MJ: You guys mine America’s old musical traditions. Whom would you most like to bring back from the dead for a jam session?

RG: Howard Armstrong—[a.k.a.] Louie Bluie. We named ourselves after one of his first bands, the Tennessee Chocolate Drops, and were really inspired after watching the documentary about him and some of his musical cohorts. Seems like everyone we meet has a Howard Armstrong story!

MJ: A big part of the Appalachian tradition involves songs of hardship and grief—just ask Leadbelly or Ralph Stanley. You guys are young, educated, popular, and successful. So what do you suppose Howard Armstrong might make of you? I know, weird question.

RG: Hmm….but a good question. Thing is, we have never pretended to have gone through the hardships that those guys went through—we are standing on their shoulders. It’s because of what they went through that we can do what we do today. I’d like to think Howard Armstrong would be happy that we are making a living playing this kind of music.

MJ: The old-time music scene nowadays feels pretty darn white. Old too: There’s a regular old-time session near my house that I’ve nicknamed “the codgers.” What do you make of this?

RG: Well, that’s changing. There are a goodly number of young’uns really coming into this music, and have been for a while. Young string bands are popping up and playing great music; we’re starting to see more young people coming to our shows simply to dance like maniacs (which we love!). Any genre is at its best when there is a good mixture of youth and experience, and this music is definitely getting there. As for the color line, that’s changing too, just a lot more slowly.