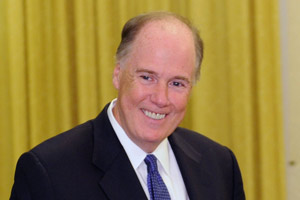 In a season of staff transition at the White House—a new chief of staff, rumors of a new press secretary, talk of adviser David Axelrod leaving—President Barack Obama may have today announced the most consequential personnel decision of the second half of his first term, even before that second half begins. Standing in the Rose Garden on Friday afternoon, the president issued the unsurprising announcement that National Security Adviser Jim Jones, a retired Marine general, will be departing and replaced by his deputy Tom Donilon, a long-time Democratic Washington insider. (Jones’ exit from Obamaland had long been expected, given that from the start he had not fit in well with the president’s crowd.)

On Obama’s to-do list, after fixing the economy (which may be beyond his control), the next big item in the coming year will be Afghanistan. While pouring more money and troops into the war, the president has vowed to start a drawdown in July 2011. And it’s no secret—ask Bob Woodward—that the US military is not eager to bug out next summer. The current strategy in Afghanistan is focused on counterinsurgency (COIN, in military-speak), which entails not only defeating the enemy in military terms but securing contested areas by developing civil order, providing security, and winning over the local populace. For plenty of reasons, it’s questionable how much success the United States can manage on all these fronts in a country dominated by tribal, ethnic, and regional rivalries and hindered by pervasive illiteracy, corruption, and poverty. Certainly, there’s serious doubt that any COIN strategy can be fully and successfully implemented by July.

Which means the US military at that point will likely not be eager to salute and initiate a withdrawal. Woodward’s recent book telegraphs the conflict to come. Obama is depicted as committed to at least beginning a disengagement in 10 months. The generals will be pressing for more time, more troops, and more wiggle room. A vigorous—shall we say—debate is likely to ensue. It will probably kick off with the administration’s scheduled year-end review of its Afghanistan/Pakistan policy, and it will involve all the power centers of the national security establishment: the Joint Chiefs, the civilian Pentagon leaders, the State Department, the vice president’s office. The fellow in charge of managing this all-important discussion will be the national security adviser. That’s his Job One—coordinating the crafting of national security policy.

For the first 21 months of his presidency, Obama has been able to keep the various national security players aboard and relatively united on Afghanistan. But the divisions are well-known. Vice President Joe Biden and his squad are not keen on COIN. (They have advocated a more narrowly targeted counterterrorism approach). And the generals wanted more troops than Obama OKed. But with Obama’s July deadline nearing, the internal conflicts will not easily be contained. The debate could get ugly, as the president is presented with the tough choice of staying or going (or something in between).

Donilon will be at the center of the policy and bureaucratic storm. In administrations past, the national security adviser has sometimes failed in this crucial role. The best example of that: Condoleezza Rice, who was unable to be an honest and effective broker between Colin Powell’s State Department and the alliance of Don Rumsfeld’s Pentagon and Dick Cheney’s vice presidential crew. In the weeks ahead, Donilon will have to make sure all that the players are in line and Obama receives the most accurate information necessary for rendering what will be one of the most significant decisions of his presidency.

How Obama handles the Afghanistan dilemma could well shape his presidency as he heads into the 2012 campaign season. And much of that could depend on how Donilon does his job.