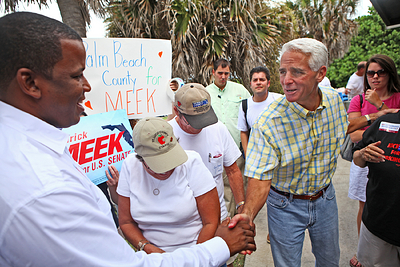 A political endorsement is typically meant to draw a line in the sand, making a distinction between candidates as a statement of principle. But down in Florida’s hotly contested Senate race, the Sierra Club has taken the unusual step of “co-endorsing” both Democrat Kendrick Meek and Independent Charlie Crist.

It’s likely a boon for Crist, the former Republican who’s been working hard to bolster his centrist credibility after tacking to the right during his GOP primary against Rubio. But Meek, to say the least, is not at all pleased—and has gone so far as to reject the environmental heavyweight’s nod of approval:

Today’s Sierra Club co-endorsement is an insult to Florida’s environmental community. The Sierra Club has chosen to stand with a governor who stood on stage applauding as Sarah Palin chanted, ‘Drill, Baby, Drill,’ a governor who signed a law making it easier for big developers to drain the Everglades, a governor who endorsed a bill that would have allowed drilling just three miles away from Florida beaches, and a governor who used polluter talking points to attack climate change legislation…

I cannot in good conscience accept an endorsement from an organization that would stand with a governor who has consistently put developers, oil companies and the special interests first. I choose to stand with the environmental community and everyday Floridians who want clean energy jobs, clean water, and clean beaches. It’s an insult to Florida’s environmental community and Sierra Club members that the organization would endorse a governor who, in the organization’s own words, ‘sold out to developers’ by ‘failing to veto even the worst bills.’ While I agree that Marco Rubio is an unacceptable choice for Florida’s environment, Charlie Crist is also an unacceptable choice.

Meek goes on to cite various environmental bills that Crist vetoed as governor, prompting criticism from the Sierra Club itself that “our ‘environmental’ Governor has sold out to developers.”

The Sierra Club has defended its decision by explaining that both candidates had gone through “a detailed endorsement process, including questionnaires and interviews with the candidates and careful review of the candidates’ records on environmental issues,” as the St. Petersburg Times reports. One Sierra Club official added: “The Sierra Club rarely makes dual endorsements, but in this case it was particularly appropriate. Florida, the public at large, and Sierra Club members who want to see environmental leaders in Washington will all be well served by either Charlie Crist or Kendrick Meek as their representative in the US Senate.”

It’s an unusual decision, indeed—and gives the impression that the Sierra Club is simply hedging its bets on who will come out on top in November.