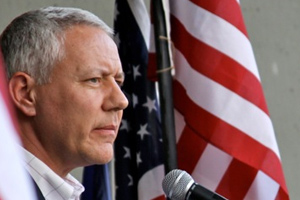 Former District Attorney Ken Buck (R-Colo.) hasn’t exactly wooed female voters during his bid for the Senate seat currently held by Democrat Michael Bennet. During the primary, Buck told voters they should pick him over Jane Norton in the Republican primary because he “doesn’t wear high heels.” Colorado pro-choicers, regardless of gender, probably know that Buck’s staunchly against abortion, even in cases of rape or incest, and supports personhood, a movement set on protecting pre-born humans. (The Personhood Amendment in Colorado wants to add language into the state’s Bill of Rights that protects a person’s rights at “the beginning of the biological development of a human being” and makes several kinds of birth control illegal).

Buck’s anti-woman rhetoric isn’t new: In 2006, he told the Greeley Tribune that a suspected rape was merely a “case of buyer’s remorse.” Yesterday, the release of a taped conversation between Buck and a rape victim by The Colorado Independent underscored the former District Attorney’s callous way of dealing with female constituents. Five years ago, the victim invited a former lover over to her house where she alleges he had sex with her while she was passed out drunk (they hadn’t spoken for a year before the incident). She pressed charges, but ultimately, Buck, the District Attorney at the time, refused to prosecute even though the perpetrator admitted that she had said no to having sex with him while he was on top of her.

In a recording of the conversation(PDF) the woman had with Buck, the then-District Attorney seems uncomfortable and confused about how to proceed with the case. “This is a case that is troubling to me,” Buck admits. “We have to fulfill our ethical obligation that this case would have an expectation of proof beyond reasonable doubt before a jury.”

At first, Buck claims he doesn’t see enough proof to prosecute the woman’s assailant. But the conversation takes a turn when the woman reads some of the police report: “When he finished, he tried to wake the victim up so he could apologize,” she reads. “How is that not ‘physically helpless, meaning unconscious, asleep, or unable to act?'” Buck then blames the rape on the woman, telling her that her previous relationship with the man and her invitation to host him in her apartment equaled consent for him to have sex with her. “Although you never said the word yes,” Buck admits, “the appearance is of consent.” The victim rebutted that argument, saying, “Even though, he also stated that I told him no.”

Buck later told a reporter that “a jury could very well conclude that this is a case of buyer’s remorse.” Even if the case had its fair share of complications, and even if there wasn’t enough legal proof to convict the guy, the incident reveals Buck’s inability to handle sensitive issues like rape. Using language like “buyer’s remorse” to characterize a rape (what, exactly, was she buying?) comes off as uncaring and falsely reduces a human interaction to an economic exchange. If he were going to use a consumer allusion, robbery might be more appropriate. Life for Colorado women under Buck is looking bleak. Though, since he considers fetuses people and is economically-minded, maybe they’ll be able to claim tax deductions on fertilized embryos.

[Update: Read MoJo assistant editor Nick Baumann‘s investigation into why the victim’s case should have been prosecuted, and how criminal law and rape law experts agree. Also, a MoJo exclusive interview with the victim.]