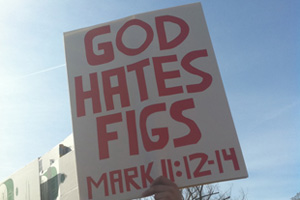 I spotted my first Christine O’Donnell witch on Pennsylvania Avenue, wearing a black pointy hat with pouches dangling from it. “I have some tea bags with dollar signs on them, because corporations are funding the tea bag—the tea partiers,” said Julie Gordon, who flew in from Green Bay, Wisconsin, to attend Jon Stewart’s Rally to Restore Sanity with her daughter. Running through the crowd was a mock tea party activist in Revolutionary War garb, wielding the movement’s iconic “Don’t Tread on Me” Gadsden flag and shouting “Ohmygod Snake! Heelp! Scary snake!”

And up ahead was a group of zombies in bloodied Reagan ’84 T-shirts and McCain-Palin hats, demanding “the braaaaiins of liberals” and posing for pictures as they lurched through the crowd. “It’s a really dangerous moment,” explained one of the Reagan zombies, George Fedorke, a 20-year-old college student from West Virginia. “Maybe our clever costumes will convince people to vote!” 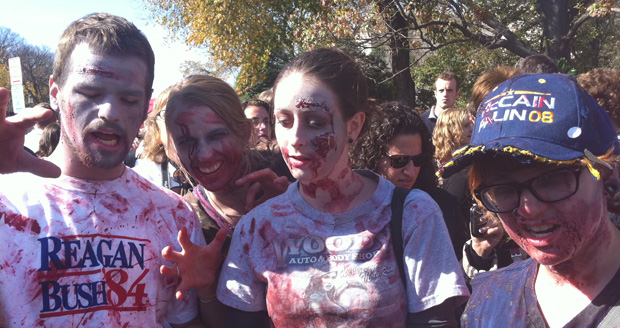 If the rally’s get-up of choice was Ironic Macabre, the entire convergence felt like an afternoon spent in liberal purgatory, where disillusioned Obama supporters could expunge their frustrations with political hysteria and right-wing nuttery, drawing solace (and bemusement) from legions of others who felt similarly. “There’s no way to revolt, because I feel it’s so corrupt it’s going to be really difficult to change,” said Gordon. “I’m just getting discouraged and want to get more fired up again—we’re all together and not going to them walk all over us.”

Huge numbers of rally-goers were actually stopped in their tracks. The massive turnout for the event—with early estimates ranging wildly from 60,000 to 200,000—completely jammed the National Mall outside the Capitol Dome. The crowd was in good spirits, packed full of college students, hipsters, Baby Boomers, with babies and grandparents in equal numbers. But an underpowered speaker system made it nearly impossible to make out what Stewart, Stephen Colbert, or any of their celebrity guests were saying during the official program. (This reporter spent three hours winding through the crowds to hear what was coming from the stage, ultimately to little avail. Judging from the tweets of David Corn and others, though, it was a concert-turned-into-a-long-comedy-skit that ended with a passionate sermon by Stewart, in which he slammed all the media—especially cable news—for creating distracting noise that prevents Americans from effectively working together to deal with the problems challenging the nation.)

Stewart and Colbert’s own presence at the rally seemed to be almost beside the point, despite endless speculation from pundits and media critics about what their rally-day message would be. There were few widespread cheers or chants—and no discernable slogans—with rally-goers getting their ya-yas out simply by being part of a decidedly entertaining (and entertained) crowd. “It matters more that we show up than we actually hear anything—we can DVR [the speeches] and watch them later,” said Sebastian Goldstein, 24, from Silver Spring, Maryland. Having attended Glenn Beck’s “Restoring Honor” rally in August, Goldstein noted that he felt compelled to attend the rally “to show that there are at least as many people who aren’t like that…who [don’t think] that government is inherently bad.”

There was no shortage of mocking the tea party right (signage: “Who Would Jesus Stomp?”). But there was also plenty of decidedly unironic anger and disdain beneath the surface (signage: “I Love My Neoconservative Homophobic Bigoted Hetero Racist Tea Party Dad”). “Exactly half the electorate is below average intelligence,” said Dennis White, a construction worker from Boston, toting a sign with a Hunter S. Thompson quote on it. “I’ve been to a tea party—some of them have genuine concerns that are legitimate, but they’ve been hijacked.”

But even the most agitated rally-goers said they’re unclear about how to fight back—aside from grudgingly casting a vote next Tuesday, which everyone said they planned to do anyway. Lynnie Vessels, a teacher from Chantilly, Virginia, sat on the curb to recover from the crowds, gazing down at the pavement as she bent forward to stretch*. “My favorite sign was ‘I’m as mad as hell—in a passive-aggressive kind of way,'” Vessels told me, after she’d revived herself.

Some attendees bitterly faulted national Democrats for failing to stand up for themselves. Though he criticized the tea party for failing to propose any real policy solutions, Steve Nering, 62, said that he was undecided about whether to vote for his Congressman, Rep. Jim Moran, an endangered Virginia Democrat. “I didn’t vote for him the last time, and I support the idea of change, bringing it about by voting the establishment out.” There were a few minor cause-celebres being touted—California’s Proposition 19 to legalize marijuana, most prominently. Yet few rally-goers specified how they’d want the political system to change, other than to reduce (mostly) right-wing hysteria and fear-mongering. “It’s definitely a sense of feeling out of control, and what can you do about the media,” said Vanessa Lee, 37, of Baltimore, holding a sign that said “Protect Our Border Collies.”

Ironypalooza certainly won’t save the Democrats from their oncoming, seemingly inevitable slaughter in Tuesday’s midterms. But that doesn’t dispel all hope for Obama himself. Though they spurned the tea-party right and shrugged their shoulders at the Democrats, rally-goers were also quick to explain that they didn’t blame Obama for the current mess.

“When I’m at a party or dinner with conservatives, I just tell people I love him, I love Obama, and that shuts people up more than anything else,” gushed Vessels*, the teacher from Virginia. “He’s the only mainstream candidate I ever supported for president,” said Adam Greser, 32, a self-avowed member of the American Community Party, wielding a sign that read, “As an actual Communist, I can tell you Obama isn’t one.” Nering, the independent voter, blamed both parties for polarizing the debate, but he was also protective of the president: “I wish they would understand that in Washington, two years isn’t enough time for change—it’s going to take a while.”

But it won’t be easy for Obama—or anyone else, for that matter—to pull his center-left supporters out of their current purgatory of disillusionment and smirking apathy. As one sign at the rally put it: “My arms are tired.”

*Corrected from the original.