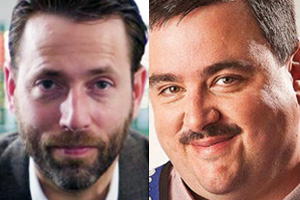 “I am not now, nor have I ever been, anything but a clean-shaven capitalist,” Chris Coons, Delaware’s Democratic Senate candidate, assured voters in a debate against tea party Republican Christine O’Donnell Wednesday night. This was an odd remark, but one he felt compelled to make after O’Donnell tried to exploit an article he wrote in college jokingly describing himself as a “bearded Marxist.” The intersection of beards (and mustaches) and politics appears to be quite a hairy issue. A recent Wall Street Journal article on the presidential prospects of former Bush administration official John Bolton zeroed in on the impact his Walrus-like mustache might have on his chances.

But the facial-hairiest race of them all is in Alaska, where tea partier (and GOP nominee) Joe Miller is locked in a three-way race with incumbent Republican Lisa Murkowski, who’s running a write-in campaign, and Sitka mayor Scott McAdams, the Democratic nominee. If elected, Miller would be the only US Senator with a beard. (Miller’s beard would also become the only senatorial beard with its own Twitter account.) McAdams, who sports a mustache, would join North Dakota GOP candidate John Hoeven (who’s favored to win) as the only mustachioed senators.

Miller and McAdams’ prospects have thrilled beard and mustache boosters. Phil Olsen is the captain of Beard Team USA, the group that organizes the National Beard and Mustache Championships and fields America’s team in the World Beard and Mustache Championships. Olsen says that while his organization is “officially neutral on both candidacies,” they “are happy to see these two doing the patriotic thing by growing [facial hair] for America.”

Dr. Aaron Perlut, the chairman of the American Mustache Institute, sent a response to Mother Jones‘ request for comment:

Certainly, the Mustached American community of Alaska and the voting Russians in plain view outside of Sarah Palin’s back door would support Comrade McAdams and go to great lengths to propagate his candidacy and values.

There is one mustached American currently serving in the Senate—Roland Burris, whom former Illinois Gov. Rod Blagojevich appointed to fill Barack Obama’s vacated Senate seat. But Burris is not running for re-election, so if Murkowski wins her write-in bid, and Hoeven somehow loses, the upper house of Congress will be completely devoid of facial hair. In the House, only a few dozen of the 435 members have facial hair. The most powerful—Henry Waxman, the chair of the House Energy and Commerce committee—is known on Capitol Hill as “the Mustache of Justice.” The substantial mustache of Arizona Rep. Raul Grijalva, another powerful Democrat, has recently become an issue in his reelection campaign. But Congress is generally pretty clean-shaven—and it’s getting more so. On Thursday, retiring Rep. Vic Snyder promised to shave his 40-year-old mustache if people donated $50,000 to Joyce Elliott, the Dem who is hoping to replace him in Arkansas’ second congressional district.

It wasn’t always this way. Even presidents used to have facial hair. In his response, Perlut mourned the days when “fine Mustached Americans like Teddy Roosevelt and William Howard Taft sat in the Oval Office at 1600 Pennsylvania Avenue.” But Roosevelt and Taft weren’t the only ones. John Quincy Adams had killer mutton chops. The most famous bearded president, of course, was Abraham Lincoln, who grew his during his first presidential campaign, supposedly at the request of 11-year-old Grace Bedell. Lincoln launched a presidential trend. The 18th, 19th, and 20th presidents—Ulysses Grant, Rutherford Hayes, and James Garfield—all wore full beards. Chester A. Arthur had big sideburns—and a huge mustache. Grover Cleveland had a mustache, and Benjamin Harrison had a beard. But no president since Taft—who left office in 1913—has regularly worn facial hair.

The last major-party presidential candidate with facial hair was Thomas Dewey, the Republican nominee in 1944 and 1948, who rocked a serious ‘stache. That robust mustache became a big political problem for Dewey. But more on that later.

Christopher Oldstone-Moore, a history professor at Wright State University in Ohio who has been called the world’s foremost beard expert, has written an (as-yet unpublished) academic article about the role of facial hair in politics. (He’s working on a book, too.) I asked him to analyze McAdams’ and Miller’s facial hair choices. “In American culture, particularly, mustaches and beards have taken on a certain kind of meaning,” Oldstone-Moore says. “They represent a kind of masculinity that’s independent and autonomous. But it has negative connotations: lack of socialbility and cooperativeness and not being a team player. Those are stereotypes, but people react to stereotypes.”

Miller’s beard, in particular, spoke to Oldstone-Moore. He notes that Miller’s background included two fields, the military and law, that are especially hostile to facial hair. (That wasn’t always the case—mustaches were a military staple for hundreds of years.) After years of working in clean-shaven cultures, growing a beard—particularly one that is, as Oldstone-Moore says, “scruffy”—is a way of sending a message that Miller is “his own man.”

“It’s a tough guy beard—almost like [Iranian president Mahmoud] Ahmadinejad’s—an aggressive, tough guy beard,” Oldstone-Moore adds. “[Miller] is a tea party kind of guy and he’s appealing to a certain type of self-reliant masculinity.” While that might not fly in the Lower 48, it probably plays well in Alaska, Oldstone-Moore says: “Alaska is always the exception. It’s the place where people, particularly men, are going to want to assert the independent, self-reliant type of masculinity.”

Dr. Allan Peterkin, the author of One Thousand Beards: A Cultural History of Facial Hair, agrees that a beard might play differently in Alaska, but still thinks it could be a liability. “With the beard, there’s an idea that a man might be hiding behind his facial hair. There’s no downside to being clean-shaven—people can’t project negative things onto that.” The mustache, Peterkin says, has an “even worse reputation.” In American culture, mustaches generally lead to one of three associations: “fop, foreigner, or fiend.” Few politicians want to be any of those.

McAdams’ mustache is not all that controversial, Oldstone-Moore contends. “It’s a modest mustache,” he says, and “mustaches are probably more acceptable than beards in general.” But even a “modest” mustache allows McAdams’ to project “a little more assertiveness.” There are other factors to consider. McAdams has a background in the fishing industry, where facial hair is common. And mustaches are considered to work better on rounder faces, like McAdams’. “Size matters,” too Oldstone-Moore says. A small mustache that is “not too small and doesn’t look like Hitler’s” is “probably acceptable,” he adds. “But not for someone in the most prominent position”—like president of the United States.

That brings us back to Thomas Dewey, the last major presidential candidate with a mustache. There was “a lot” of discussion of Dewey’s mustache, and it became an obstacle for some voters—particularly women, according to Oldstone-Moore. Political columnists at the time regularly weighed in on Dewey’s choice of lip-adornment. One prominent journalist referred to Dewey as “a Clark Gable of candidates.” But “that’s not necessarily a very good thing,” Oldstone-Moore explains. “Clark Gable is alluring and seductive but also dangerous. You don’t want someone like that to be in charge of the government, because there’s a sense that you really can’t trust him.”

Another writer, Helen Essary, wrote that she had “heard dozens of women make the same criticism”: that the mustache “takes from the seriousness and strength of his face. Moreover it will not help with the women vote….You see only the mustache. You remember only the mustache. Without it, Governor Dewey would look a million per cent more real as the proper man for the White House job he is after.” In the New York Times Magazine, Edith Efron wrote that Dewey “may be elected to office, but it will be in spite of his ‘manly attributes’—not because of them.”

Here’s an excerpt from Oldstone-Moore’s article:

Appearing at a televised forum in 1950 during a gubernatorial re-election campaign after having run for president twice, the first question from a woman voter was why [Dewey] had a mustache. Dewey responded that as a young man he stopped shaving because it hurt his lip, and he kept it because Mrs. Dewey liked it. Simple enough. But it was never a simple matter.

Here’s Oldstone-Moore discussing Dewey, McAdams, Miller, and facial hair in general. I even grew a beard for the interview, though luckily I don’t have to worry about my electability. Check it out (there are two parts):