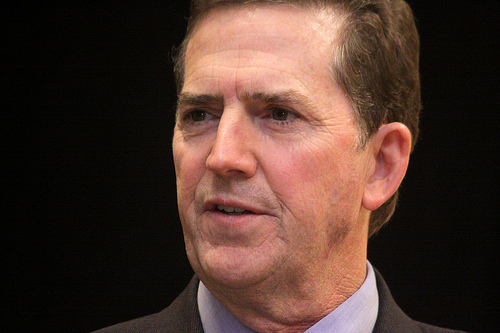 Back when Sen. Jim DeMint (R-SC) first ran for the House in 1998, he decried political action committees and the money they slosh into elections as the root of congressional evils. In his platform, he pledged to eschew all PAC money (via The Hill):

“Special interest PAC money corrupts our political system because it allows special interest groups to control elections and our representatives,” read the 1998 platform. “Jim DeMint will not take any PAC money and will fight for reforms that allow only individual contributions to campaigns.”

DeMint clearly had a change of heart. Now, not only does he have his own PAC, the Senate Conservatives Fund (“dedicated to electing true conservatives to the United States Senate”) but it’s easily one of the most influential on the right these days. According to data from the Center for Responsive Politics, SFC has outraised all other leadership PACs this election cycle. It’s poured $5.2 million into races this year, with most of that money going to support 11 tea party-backed Senate candidates, according to an update on “investments” the fund posted on Tuesday.

The biggest beneficiaries of the Senate Conservatives Fund’s largesse:

That’s in addition to the $1.8 million that DeMint has transferred from his own re-election committee to state parties, mainly in the locales where his favored tea party candidates are running. DeMint is up for reelection himself this year, but isn’t too worried about his Democratic opponent, the enigmatic Alvin Greene, which has left him with plenty of extra money on hand.

The big spending on these tea party-backed candidates in 2010 certainly boosts DeMint’s profile in the Senate. He has bucked his party in support of a slate of farther-right challengers, most of whom beat out more mainstream Republicans in their primaries. And the “investments” his PAC made in the campaigns of upstart candidates may soon pay dividends. Of those he’s supported, only O’Donnell is a long-shot; the others are leading or at least strongly competitive in their races. There have even been murmurs that DeMint may try to oust Mitch McConnell from his leadership role in the next Congress. Helping elect a number of more conservative candidates this year would give him considerably more clout in the caucus next year, all but ensuring the loyalty of the candidates he helped elect.

But DeMint’s spending spree has not come without controversy. The Democratic Party in Colorado filed a complaint this week with the Federal Election Commission arguing that the SFC and Buck’s campaign have been coordinating their efforts too closely—a potential violation of campaign finance laws. However, it’s unlikely that the FEC will look into the matter before next Tuesday’s election.