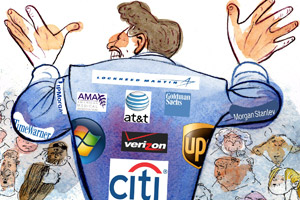 Read also: The rest of this special report, a note on sourcing, and MoJo‘s daily political coverage.

Lawmakers’ most generous donors of all time, from the predictable to the absurd.

Booze Lobby
16 members slurp up the most liquid assets from liquor makers and distributors, including 6 whose top donor is the National Beer Wholesalers Association.

Lingerie Caucus
Columbus-based Limited Brands, which owns Victoria’s Secret, has Rep. Patrick Tiberi (R-Ohio) amply covered. Its employees and PACs have given him $113,450.

Drill, Baby, Drill Caucus
Oil rig operator Edison Chouest pumps the most money into the bank accounts of 4 members from its home state of Louisiana.

Pumped Up by BP

BP Caucus
As oil companies go, BP isn’t a huge donor (No. 9 in its industry in ’08). Its biggest-ever recipient is Barack Obama, with more than $77,000. Most of the current members whom BP has greased most generously (right) sit on an energy, environment, or natural resources committee.

What’s Good for General Motors…
GM is the most powerful campaign-finance engine for 3 Michigan lawmakers. In 2008, the automaker’s PAC handed out nearly $623,000 (Toyota spent $0). Since being taken over by the feds in 2009, it’s given nothing.

No. 2 With a Bullet
Three members’ second-biggest donor is the NRA, including Rep. Alan Mollohan (D-W.V.), who got shot down in this year’s primary.

The CO2 Is Good for You Caucus
Koch Industries, an oil company and funder of climate-change denial groups, is the top donor to 4 members. 6 members get anything but coal in their stockings from Southern Company, a major sponsor of the American Coalition for Clean Coal Electricity, which lobbies against climate legislation. Other ACCCE companies on the top donor list include Foundation Coal (2 members) and American Electric Power (1 member).

Number of lawmakers whose top career donor is…

an oil or gas company:

The Overnight Caucus
FedEx delivers the most cash to 7 members, 5 of whom hail from its home state of Tennessee; rival UPS ships the most to 4.

Blue Screen of Death Caucus
Microsoft, Congress’ 13th-biggest corporate giver since 1989, is the top donor to 6 members—all from Washington state. Google is 2010’s third-biggest tech-industry giver. Apple doesn’t even have an iPAC.

Quik Cash Caucus
Rep. Lynn Jenkins (R-Kan.) gets her biggest advances from QC Holdings, a payday loan company based in her district.

Rolling the Dice
6 members hit the jackpot with casinos or gambling outfits. Rep. Joe Baca (D-Calif.) got a $76,300 payout from the San Manuel Band of Serrano Mission Indians, whose casino is next to his district. He’s against internet gambling, which competes with casinos.

A League of His Own
The League of Conservation Voters has given the most green to Sen. Mark Udall (D-Colo.), the only member with an environmental group in the top contributor slot.

Next: Obama vs. McCain in Corporate Cash