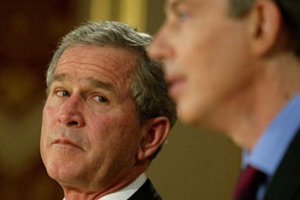 In his new (self-serving, of course) memoir, former British Prime Minister Tony Blair praises George W. Bush as a man of “genuine integrity and as much political courage as any leader I have ever met.” Yet Blair leaves out of the 700-page tome any mention of a meeting he had with Bush in which the US president proposed a plan to trigger the Iraq war through outright deceit.

The early media coverage of Blair’s book, A Journey: My Political Life, has zeroed in on his complex and dramatic relationship with Gordon Brown, his onetime political soulmate. (Blair writes about him as one would an ex-lover.) Yet Blair devotes a serious chunk to defending his decision to partner up with Bush for the Iraq war. “I can’t regret the decision to go to war,” he writes. “…I can say that never did I guess the nightmare that unfolded.” He adds, “I have often reflected as to whether I was wrong. I ask you to reflect as to whether I may have been right.”

Blair rehashes the familiar arguments—the years of Saddam Hussein’s recalcitrance and opposition to United Nations resolutions demanding he disarm, the so-called evidence of weapons of mass destruction. Blair writes of his first meeting with Bush—whom he describes as “very smart” but possessing “immense simplicity in how he saw the world”—in February 2001 at Camp David, when they discussed sanctions for Iraq (“there was no great sense of urgency”). Blair recalls in detail other visits and calls with the American president: his trip to Washington shortly after 9/11, a meeting at Bush’s ranch in Crawford, Texas, in April 2002, where the two men discussed a possible attack on Iraq. Blair even recounts specific notes he sent Bush and telephone calls they held during the run-up to the invasion, as the pair sorted out military and diplomatic matters. And over several pages, he chronicles a September 2002 trip to Camp David to see Bush.

“The US was thinking,” the memo said, “of flying US reconnaissance aircraft with fighter cover over Iraq, painted UN colours. If Saddam fired on them, he would be in breach” of UN resolutions.

But there’s no reference to the meeting Blair held with Bush in the Oval Office on January 31, 2003, less than two months before the war would be launched.

During that conversation, Blair told Bush that he needed a second UN resolution that explicitly authorized military action against Iraq, having promised his Labour Party that he would seek one. Blair explained that the resolution—or, at least, an attempt to obtain the resolution—was necessary political cover for him and, according to a memo written by a Blair aide documenting the meeting, “international cover, especially with the Arabs.” Bush agreed to try to twist arms at the UN, but he informed Blair that he had already selected a tentative start date for the war: March 10. (Ultimately, there would be no such UN resolution.)

But more than politics was discussed. According to the memo, Bush and Blair each said they doubted any weapons of mass destruction would soon be discovered by the UN inspectors then searching for such arms in Iraq. With no WMDs, it could be harder to win support for the war. But Bush had an idea—or two.

The memo notes that Bush raised the notion of provoking a confrontation with Saddam Hussein. “The US was thinking,” the memo said, “of flying US reconnaissance aircraft with fighter cover over Iraq, painted UN colours. If Saddam fired on them, he would be in breach” of UN resolutions. A retaliatory attack would then be fully justified; the war could begin. Bush also discussed producing some “defector who could give a public presentation about Saddam’s WMD.” At this meeting, the two men also agreed that it was unlikely that “internecine warfare” would break out between “different religious and ethnic groups” after an invasion of Iraq.

This memo was a startling revelation. Here was the US president hinting at mounting a giant con game to start a war: creating a phony incident to grease the path to an invasion. The memo—portions of which were published in the New York Times and in Philippe Sands’ Lawless World—does not record Blair objecting to this potential subterfuge. (I have read the entire memo.)

Blair could provide a tremendous service to historians (and the citizens of England and the United States) by offering an accurate, eyewitness account of what transpired in the Oval Office that day. What did Blair think of a US president hinting at such trickery to kick-start a war? Did he take Bush’s notion seriously? Did Bush propose any other unconventional ideas? Yet by engaging in Soviet-style revisionism—don’t recognize an inconvenient historical event—Blair doesn’t have to answer these questions. Nor does he have to defend his apparent silence in response to Bush’s suggestion that they cheat their way to an invasion. Nor does Blair have to reconcile his description of Bush—a man of integrity—with the documented record (created by Blair’s own aide). By ignoring this conversation, Blair demonstrates that this book—despite his passionate claims—is not a good-faith and candid accounting of all the trials and tribulations he underwent as the United States and England headed to war.

At one point in Blair’s memoir, he refers to Bush as a “man at peace with himself.” That’s not how Blair comes across in his book. Perhaps that’s because he realizes he is not being completely honest.