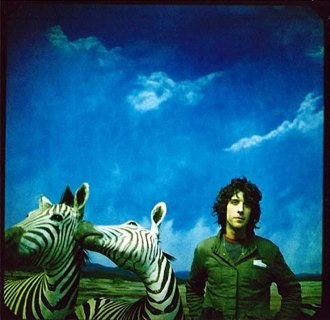 Paleo
A View of the Sky
Partisan Records

Charles Badger Clark Jr. became South Dakota’s first poet laureate in 1937. He was the son of a methodist reverend, though he never had much use for formal religion. After a failed stint in college and an adventure to Cuba, Clark found himself living on a ranch near Tombstone, Arizona. It was there that he penned “A Cowboy’s Prayer,” of which historian Katie Lee said: “Of the hundreds of poems written about cowboys praying to the stars, this is probably the best.”

Here’s a little bit of it:

Just let me live my life as I’ve begun,
And give me work that’s open to the sky;
Make me a pardner of the wind and sun,
And I won’t ask a life that’s soft or high.

“Beyond his wonderful presentation of the West is the quality of universal appeal that makes his work real art,” wrote Clark’s editor, Ruth Hill. “He has tied the West to the universe.” Clark revered the solitary landscapes and travelers’ yarns that inspire a certain type of person to a life of wandering. The time of cowboys was already passing when he wrote “A Cowboy’s Prayer,” but others have picked up his project. One of the most direct descendants might be outlaw singers like Townes Van Zandt and Steve Earle. And more recently, little-known songwriter Paleo—whose new album A View of the Sky comes out next month.

The album consists of songs with titles like the title track and “Everything Must Go.” They are contemporary folk songs that don’t sound much like the music of Van Zandt or the poetry of Clark, but just the same they are the hymns of a traveler, endowed with a fascination for nature and a restless acceptance of changing circumstance.

Paleo is perpetually on the go, living out of his car, zig-zagging across the county as he plays for anyone who will listen. He is also prolific, once writing a song a day for an entire year—a la Jonathan Mann.

Like all of Paleo’s albums, not everything on A View of the Sky is great. But it’s worth a listen nonetheless, because regardless of how you feel about his music, it’s hard not to respect his project and the tradition from which it comes. Every Sunday, wherever Paleo is, he records what he calls a Sunday Prayer. Here’s part of a recent one written in Asheville, North Carolina earlier this month:

call me the old rookie, i am broke & bewildered
i am yellow as a used cigarette filter
but the spirit remains upright, though the body bends
tearing leaves off of the trees as you walk by them