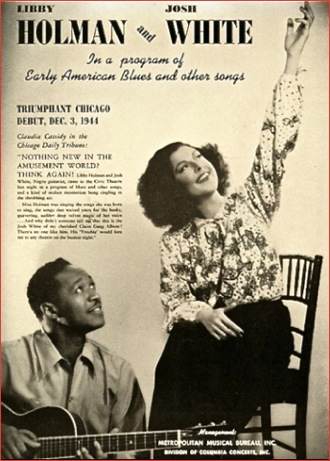 In 1942 the Jewish torch singer Libby Holman recorded “Baby, Baby” with the famed bluesman Josh White. Holman was always fascinated by the music of black artists. She was the wealthy widow of a JR Reynolds heir and had used her fortune to pay for blues lessons and her collaborations with White. Once, she hired Billie Holiday to sing at her son’s birthday party. She was “not trying to copy the Negroes,” she said, “just taking their feeling.”

Holman and White’s “Baby, Baby” can be heard at Black Sabbath: The Secret Musical History of Black-Jewish Relations, a new exhibit at the Contemporary Jewish Museum in downtown San Francisco. Black Sabbath, created by the Idelsohn Society for Musical Preservation, explores the often surprising intersections of black and Jewish culture in the music of the 20th century. “These stories of common struggle and hardship have long left their mark on popular music,” explains one sign at the exhibit. Indeed, the blues seemed to have resonated in this way with Holman. Looking back on her life, it isn’t hard to see why.

On November 16, 1931 Holman married Zachary Smith Reynolds, who had been infatuated with her. He followed her to each city she went in her career as an actress and signer. But their union lasted only eight months. It ended when Reynolds was found dead at his estate in North Carolina. Originally, the death had been ruled a suicide, but soon two grand juries that, at least according to the Jewish Women’s Archive were anti-Semitic, charged Holman with murder.

Holman went into hiding with her ex-lover Louisa Carpenter until the charges were eventually dropped. It was there that she gave birth to her and Reynold’s son, Christopher, who would die 17 years later in a mountain climbing accident. Her next attempt at married life was with actor Ralph de Rimer Holmes, who went off to fight in World War II and upon returning committed suicide. In the following years, before her own apparent suicide in 1971, Holman began collaborating with black artists like White, reworking old spirituals and blues songs. From “Baby, Baby,” sung to the melody of a slow “See See Rider“:

Black Sabbath offers little historical discussion of how and why these collaborations came about. But after listening to Holman sing “Baby, Baby,” or Billie Holiday sing “My Yiddishe Mama” it hardly seems to matter. The dozens of songs that make up Black Sabbath—many of which will be available September 14 on a new CD of the same name from the Idelsohn Society—make it difficult to deny that such a connection exists, and that, for a long time, black and Jewish musicians have been taking each other’s feeling.