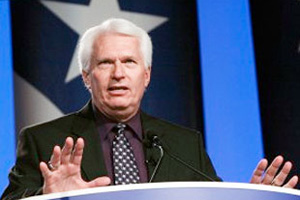 As the director of issues analysis at the American Family Association, Bryan Fischer has issued some rather interesting “analysis” over the past year. He has said that Muslims should be banned from serving in the military; that a whale at Sea World should have been stoned to death for killing its trainer; that inbreeding makes Muslims stupid and violent; and that gay sex is a form of domestic terrorism. So naturally, he has been invited to speak to a huge gathering of conservative political activists this weekend, alongside such GOP luminaries as Rick Santorum, Mike Huckabee, Mitt Romney, Sen. Jim DeMint (R-S.C.), and Rep. Michele Bachmann (R-Minn.).

Sponsored by the Family Research Council, the Values Voter Summit is the premier Christian-right political gathering in Washington, DC. Running for three days this weekend, the summit is most notable for its straw poll, which serves as a testing ground for Republicans thinking of throwing their hats into the ring for the next presidential primary. Virtually all the GOP presidential wannabes will be there (though Sarah Palin won’t), along with a who’s who of social conservative activists. Thousands will gather to attend panel discussions on the “American Apocalypse,” the “Obama Administration’s War on Life,” and “How To Reach the Online Generation (Without Losing Your Soul).” Robert Davi, the character actor who narrated the infamous Demon Sheep ad, will talk to the crowd about Hollywood conservatism. And Fischer will address a plenary session—shortly after Bill Bennett and Virginia Gov. Bob McDonnell speak, and right before Louisiana Gov. Bobby Jindal is scheduled to appear.

People for the American Way, a liberal advocacy group, has urged leading Republicans to bail on the event, lest they be seen as legitimizing Fischer’s bigotry. PFAW president Michael B. Keegan, said in a statement:

By sharing a stage with Fischer, public figures like Mitt Romney, Mike Huckabee, Mike Pence, Bob McDonnell, and Michele Bachmann don’t necessarily endorse Fischer’s shameless anti-Muslim and anti-gay propaganda—but they do acknowledge its credibility. Any candidate thinking seriously of running for president in 2012 should think twice about standing alongside a man who has called for the deportation of all Muslims in America; insulted Muslim servicemembers; claimed that brave Americans died in vain because Iraq was not converted to Christianity; and called gay people deviants, felons, pedophiles, and terrorists. Bryan Fischer is no mainstream conservative. And neither is any person who shares a platform with him while refusing to denounce his hate-filled propaganda.

(Fischer has since attacked PFAW on his radio show for calling him a bigot, but his argument wasn’t especially persuasive. For instance, in response to his earlier calls to deport all Muslims, Fischer claimed that he was simply suggesting the US would be “doing them a favor by repatriating them to their homeland where an entire nation shares their values.” Most of his defense only seemed to confirm PFAW’s criticism, but later he thanked PFAW for helping to spread his message. Read his response here and here.)

Whether or not leading Republican lawmakers and presidential contenders agree with Fischer, if they appear at a conference that condones (and enables) Fischer’s extremism, Muslims overseas (and at home) may form the impression that such talk is sanctioned by current and potential US officials. It’s hard to imagine that Huckabee et al would feel comfortable speaking at an event where a featured speaker suggested that Jews should be banned from the military or prevented from building synagogues in the US.

Fischer is not the only fringe character on the lineup. Also invited to speak is retired Lt. Gen. William Boykin, who is equally outspoken in his views about gays and Muslims. Over the summer, Republicans briefly had him on the witness list to testify against now Supreme Court Justice Elena Kagan about her treatment of the military at Harvard. But once his background got ’round the media, he was unceremoniously dumped from the list. Here’s what I wrote about him back then:

In 2002, Defense Secretary Donald Rumsfeld tapped Boykin to serve as Deputy Undersecretary of Defense for Intelligence, where he was charged with heading the military’s search for Osama bin Laden and other terrorist leaders. The following year, news leaked that Boykin had been spending a lot of his free time preaching in fundamentalist churches around the country about the Christian holy war on Islam.

Once, in an Oklahoma Baptist church, Boykin showed the congregation a series of photos he had taken in Somalia shortly after the famous 1993 Black Hawk Down incident, which resulted in the deaths of more than a dozen Americans. He claimed that a dark shadow that appeared in one of his photos across the top of Mogadishu was not a film processing fluke but rather the “principalities of darkness… It is a demonic presence in that city that God revealed to me as the enemy.” Such commentary led to an internal investigation and the military reprimanded Boykin for speaking out of school without permission. He finally retired in 2007 and ever since has been a regular on the fringe-right talk circuit, joining such luminaries as Peter LaBarbera and the Traditional Values Coalition’s Lou Sheldon to talk about the culture wars.

It seems unlikely that any of the Republican pols will drop out of the summit because of Fischer or Boykin. None of them are especially friendly to gays or Muslims, anyway. (Remember Huckabee’s famous “ick factor” quote in the New Yorker?) And Fischer has participated in Values Voter Summits in the past. At last year’s event, he opined that Adolph Hitler had come up with the idea of separation of church of state and was the inspiration for the forces of “secular fundamentalism” who were bent on “castrating” the church, according to PFAW’s blog Right Wing Watch. Given that Fischer is such a known quantity, the FRC isn’t likely to dump him just because some liberal advocacy group complains about him. After all, the entire summit is co-sponsored by Fischer’s employer, the American Family Association, which seems to have donated heavily to ensure that its reps dominate the schedule. Don Wildmon, AFA’s head honcho, and Buddy Smith, the executive vice president of the group, are both speaking at a luncheon during the conference.

That’s not to say that the summit organizers don’t have standards. The FRC has scratched speakers in the past. Last year, it disinvited former South Carolina governor Mark Sanford, who had been a rising star of the GOP and a potential presidential contender until he secretly flew off to Buenos Aires to visit his Argentine lover and told his staff that he was “hiking the Appalachian trail.” Also conspicuously absent fromt this year’s schedule is Carrie Prejean. The former Miss California became the darling of social conservatives after she made headlines for answering a Miss USA pageant question from Perez Hilton about gay marriage by saying marriage should be between a man and a woman. She lost the pageant but earned top billing at the 2009 Values Voter Summit, wowing the crowd by saying that “God chose me” for the gay marriage question in the pageant. The Prejean sex videos that emerged a few months later are no doubt one reason why she is not on the Values Voter lineup this year. As long as Fischer doesn’t produce any sex scandals, he likely will be free to spew all the anti-Muslim and anti-gay venom he can at the summit. And the GOP’s biggest names will be right there with him.