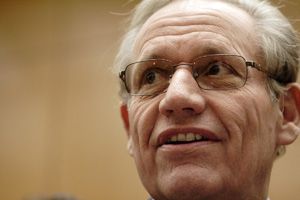 Once a serious journalist, the Washington Post’s Bob Woodward now makes a very fine living as chief gossip-monger of the governing class. Early on in his career, along with Carl Bernstein, his partner at the time, Woodward confronted power. Today, by relentlessly exalting Washington trivia, he flatters power. His reporting does not inform. It titillates.

A new Woodward book, Obama’s Wars, is a guaranteed blockbuster. It’s out this week, already causing a stir, and guaranteed to be forgotten the week after dropping off the bestseller lists. For good reason: when it comes to substance, any book written by Woodward has about as much heft as the latest potboiler penned by the likes of James Patterson or Tom Clancy.

Back in 2002, for example, during the run-up to the invasion of Iraq, Woodward treated us to Bush at War. Based on interviews with unidentified officials close to President George W. Bush, the book offered a portrait of the president-as-resolute-war-leader that put him in a league with Abraham Lincoln and Franklin Roosevelt. But the book’s real juice came from what it revealed about events behind the scenes. “Bush’s war cabinet is riven with feuding,” reported the Times of London, which credited Woodward with revealing “the furious arguments and personal animosity” that divided Bush’s lieutenants.

Of course, the problem with the Bush administration wasn’t that folks on the inside didn’t play nice with one another. No, the problem was that the president and his inner circle committed a long series of catastrophic errors that produced an unnecessary and grotesquely mismanaged war. That war has cost the country dearly—although the people who engineered that catastrophe, many of them having pocketed handsome advances on their forthcoming memoirs, continue to manage quite well, thank you.

To judge by the publicity blitzkrieg announcing the arrival of Obama’s Wars in your local bookstore, the big news out of Washington is that, even today, politics there remains an intensely competitive sport, with the participants, whether in anger or frustration, sometimes speaking ill of one another.

Essentially, news reports indicate, Woodward has updated his script from 2002. The characters have different names, but the plot remains the same. Talk about jumping the shark.

So we learn that Obama political adviser David Axelrod doesn’t fully trust Secretary of State Hillary Clinton. National security adviser James Jones, a retired Marine general, doesn’t much care for the likes of Axelrod, and will say so behind his back. Almost everyone thinks Richard Holbrooke, chief State Department impresario of the AfPak portfolio, is a jerk. And—stop the presses—when under the influence of alcohol, General David Petraeus, commander of US and allied forces in Afghanistan, is alleged to use the word “f**ked.” These are the sort of shocking revelations that make you a headliner on the Sunday morning talk shows.

Based on what we have learned so far from those select few provided with advance copies of the book—mostly reporters for the Post and The New York Times who, for whatever reason, seem happy to serve as its shills—Obama’s Wars contains hints of another story, the significance of which seems to have eluded Woodward.

The theme of that story is not whether Dick likes Jane, but whether the Constitution remains an operative document. The Constitution explicitly assigns to the president the role of commander-in-chief. Responsibility for the direction of American wars rests with him. According to the principle of civilian control, senior military officers advise and execute, but it’s the president who decides. That’s the theory, at least. Reality turns out to be considerably different and, to be kind about it, more complicated.

Obama’s Wars reportedly contains this comment by President Obama to Secretary Clinton and Secretary of Defense Robert Gates regarding Afghanistan: “I’m not doing 10 years… I’m not doing long-term nation-building. I am not spending a trillion dollars.”

Aren’t you, Mr. President? Don’t be so sure.

Obama’s Wars also affirms what we already suspected about the decision-making process that led up to the president’s announcement at West Point in December 2009 to prolong and escalate the war. Bluntly put, the Pentagon gamed the process to exclude any possibility of Obama rendering a decision not to its liking.

Pick your surge: 20,000 troops? Or 30,000 troops? Or 40,000 troops? Only the most powerful man in the world—or Goldilocks contemplating three bowls of porridge—could handle a decision like that. Even as Obama opted for the middle course, the real decision had already been made elsewhere by others: the war in Afghanistan would expand and continue.

And then there’s this from the estimable General David Petraeus: “I don’t think you win this war,” Woodward quotes the field commander as saying. “I think you keep fighting… This is the kind of fight we’re in for the rest of our lives and probably our kids’ lives.”

Here we confront a series of questions to which Woodward (not to mention the rest of Washington) remains steadfastly oblivious. Why fight a war that even the general in charge says can’t be won? What will the perpetuation of this conflict cost? Who will it benefit? Does the ostensibly most powerful nation in the world have no choice but to wage permanent war? Are there no alternatives? Can Obama shut down an unwinnable war now about to enter its tenth year? Or is he—along with the rest of us—a prisoner of war?

President Obama has repeatedly stated that in July 2011 a withdrawal of U. S. troops from Afghanistan will commence. No one quite knows exactly what that means. Will the withdrawal be symbolic? General Petraeus has already made it abundantly clear that he will entertain nothing more. Or will July signal that the Afghan War—and by extension the Global War on Terror launched nine years ago—is finally coming to an end?

Between now and next summer attentive Americans will learn much about how national security policy is actually formulated and who is really in charge. Just don’t expect Bob Woodward to offer any enlightenment on the subject.