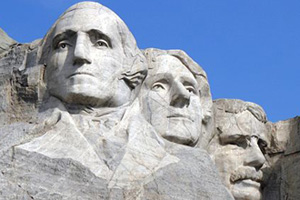 Omaha, Nebraska—By now, I’ve had a little bit of time to chew over the Wounded Knee massacre monument, and it’s still kind of gnawing at me. So I’ll just give you a short sketch, to give you a better sense of what the place is like:

Try to imagine a national cemetery, immaculate and regimented, and then visualize the exact opposite of it, and you’ll maybe get a decent mental image. When you approach the monument, grasshoppers the color of honey dijon scatter at your feet as if tossed from a see-saw, and the wind cuts through the prairie from the south like entrance music. Cook Islanders had 32 words for wind; I can’t speak for the Oglala, but here on the northern plains, in the poorest patch of the richest nation on the face of the Earth, amid acres of wavy wheatgrass and milkwort and sunflowers, and badlands like so many miles of drip-castles in a desert, the wind is the life that rushes through the land when all else has gone to rest.

The cemetery—which includes the monument to the victims of the Wounded Knee massacred by US troops in 1890, along with the graves of Oglala spanning a century—sits on an elevated plot of ground with views of the valley below, provided you’re standing outside the chain-link fence that surrounds the central area.

The physical monument itself, which is only a small part of the Wounded Knee cemetery, is more like a collection basket. 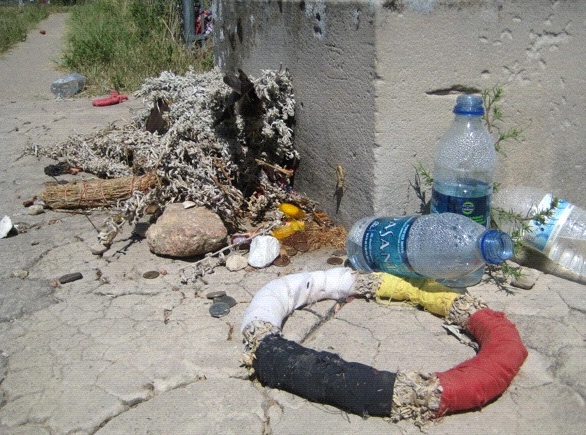 Well-wishers have left pennies, nickels, dimes, bundles of dried prairie grasses, small rocks, suggested reading materials, feathers, incense, bottles of Dasani, a Bhutan prayer flag, and one very lonely butterscotch sucker. To complete this scene, add a few brigades of ants, because people keep on leaving food, and nothing must go to waste.

We’re the only other white people there, save for a young couple from Belgium, passing through on their way to Badlands. When Ian Frazier checked the place out in On the Rez, he was the only white American there, too (in his case, the tourists were German). If you’re on vacation, piled two rows deep in the minivan, Wounded Knee isn’t exactly the low-stress environment you’re looking for. What do you tell the kids, anyway?

So, that’s the cemetery. Now that I’ve had some time to think, though, I’m struck by what surrounds the monument as much as the immediate beauty. Over the last few weeks, I’ve picked up bits and pieces of the debate (one-sided as it is) over whether it’s “right” to build an Islamic community center two blocks away from New York’s ground zero. I didn’t expect the issue to last this long, but it’s apparently the No. 1 crisis facing America right now; I guess you just never know. Anyway, here on the plains, where the Oglala Sioux are surrounded by both living and inanimate monuments to their fate, it’s tough to express just how dissonant that all feels.

For the uninitiated, Wounded Knee is where, in 1890, Union soldiers killed more than a hundred Oglala in the dead of winter, on account of a particular form of religious expression called the “Ghost Dance,” which the federal government had declared illegal. Just two South Dakota blocks* away from the monument, you’ll find the town of Whiteclay, Nebraska, a town built almost exclusively to sell alcohol to Indians on the reservation—after alcohol had been banned on the reservation. Of course, the reason they were living on Pine Ridge in the first place was because the US had reneged on an established treaty and driven the Sioux out of their sacred grounds in the Black Hills, because someone had found gold. When that was finished, they marked the occasion by carving a massive monument to themselves on the side of a mountain. They even found a Klan-member to design the thing. And voila, Mount Rushmore.

Which is not to say you shouldn’t still take your kids to Mount Rushmore, or watch North By Northwest, or get into donnybrooks over which president you’d replace and who you’d replace him with (the correct answer is Thomas Jefferson, because of his second term, and Martin Van Buren, because of the mutton chops). Just that if you want to establish a precedent of banning all references to “offensive” constructions from hallowed patches of American ground, you’d better hope there’s a grandfather clause, too.