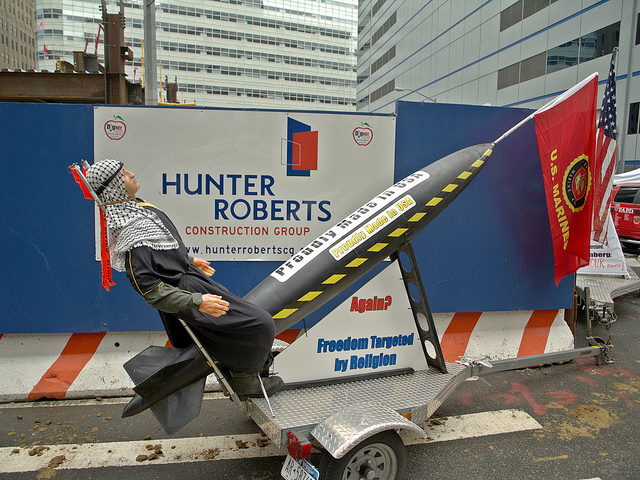 Protesters of the "ground zero mosque" made their case for consecrating the attack site by adorning it with this effigy of a keffiyeh-clad Muslim on a missile. Flickr/<a href="http://www.flickr.com/photos/shankbone/4916882545/">David Shankbone</a>

Wading into the alleged controversy over Park51, the planned Islamic community center on Park Place in Lower Manhattan (aka the “ground zero mosque”), Karen Hughes—the former press secretary for George W. Bush who ran the administration’s woeful Muslim “outreach” effort—wrote a Washington Post op-ed imploring the center’s planners to move away as a show of “unity” and “uncommon courtesy” to offended Americans. Yet on the ground in New York, the center’s protesters showed no courtesy when it came to shaming and shouting down anyone who didn’t fit their profile of a good, patriotic American.

Hughes’ op-ed conformed to the usual “one of my good friends is Muslim-American, but…” construction. But rather than directly attacking the “mosque,” as she called Park51, Hughes offered a meta critique and called on the center’s sponsors to exercise their religious freedom to one end: abdicating their religious freedom. While they’re free to put their religious center wherever they want, Hughes wrote, moving away would be “a powerful example” of sensitivity to Americans who “are neither anti-freedom nor anti-Muslim; they just don’t believe it’s respectful.”

Translation: Show some sensitivity to those who think Islam isn’t respectful because they hold it responsible for Al Qaeda’s attack on America.

Two hundred miles and light years away from that Beltway lesson in ethics, the AP chronicled how protesters at Manhattan’s ground zero this weekend respected and consecrated that “hallowed ground” by verbally assaulting a (non-Muslim) ground zero worker wearing a skull cap; by touting effigies of Muslim “terrorists”; by carrying signs that read “NO CLUBHOUSE FOR TERRORISTS!“, “SHARIA“, and “IF YOU WANT TO ‘BRIDGE THE GAP’ THEN SHOW SOME SENSITIVITY AND PUT A GAP BETWEEN THIS MOSQUE AND GROUND ZERO”; and by threatening that if Park51 is built, “We will bombard it.”

There are more details of uncivility in the AP story. But one detail, added by Gawker, is worth noting: At one point, the anti-“mosque” crowd shouts a protest chant against a single dark-skinned man in a skullcap weaving through the crowd. They apparently mistake him for a Muslim; in fact, he is a non-Muslim named Kenny, “a Union carpenter who works at Ground Zero.” The video:

This imagery and the Hughes op-ed set up a really fascinating juxtaposition. That Hughes would get involved now is unsurprising; even liberal leaders of late have waxed nostalgic for the Bush administration’s rhetoric of tolerance and fairness to Muslims. And since the former president himself has declined to lend a voice of reason, Hughes senses an opportunity to cement Bush’s legacy as a religious uniter in the American public’s mind.

That’s a peculiar revision to history. Notwithstanding a few visits to mosques and cursory statements to the citizenry that they shouldn’t run amok, killing everyone in sight wearing a turban, George W. Bush bungled his relationship with the Muslims of South Asia by letting Afghanistan slide backwards. He alienated much of the Muslim and non-Muslim world by conflating the supposed threat of the Iraqi Saddam regime with that of Al Qaeda, and fed radical Muslims’ narrative about American domination by engaging in a prolonged, disorderly, humiliating occupation of Mesopotamia. He commanded a national security apparatus that wiretapped Muslims without warrants, stashed them on no-fly lists, detained them indefinitely on secret evidence, tortured them, and sometimes killed them. His was the Mazar-i-Sharif, Bagram, shock-and-awe, Fallujah, Abu Ghraib, Haditha, Gitmo, PATRIOT Act presidency. He showed Islam about as much sensitivity as he showed New Orleans’ Ninth Ward.

That we must look to George W. Bush, the Ulysses S. Grant of the 21st century, as a voice of calm really says something about the state of America’s collective psyche. His rule was pure ego, to be sure. But pure ego suddenly looks far preferable to the unrestrained id asserting itself at ground zero.