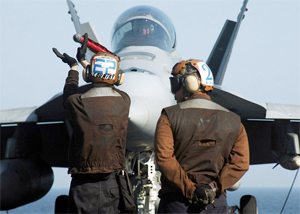 Consider for a moment TOP GUN, that shirtless-volleyball-and-locker-room-celebratin‘ Tom Cruise vehicle of the ’80s. Even before Kenny Loggins and Berlin laid down the glitzy soundtrack, TOP GUN was possibly the gayest military movie ever made. And yet it’s beloved by naval aviators the world ’round.

Part of its legacy is the celebration of the aviator’s call sign, the nickname bestowed on him (or, since May 1991, her) by squadron mates. Sure, call signs were around before TOP GUN, but by the ’90s, thanks to the naval aviation community’s filmic opus, they’d really become a point of pride, both initiation rite and operational moniker. (In the movie, this is taken to a point of absurdity, where even Anthony Edwards’ wife calls him “Goose” instead of his Christian name. Creepy.)

But combine it with the testosterone-charged atmosphere in a fighter squadron, and the call-sign tradition can have a truly ugly side—one that Ensign Steve Crowston discovered firsthand when he joined the pilot fraternity last year. According to Navy Times:

…when the new admin officer walked into the ready room for Strike Fighter Squadron 136 in Virginia last year, he claims he found dozens of aviators—including the squadron’s commanding officer—openly mocking him as an alleged homosexual.

“Fagmeister” was one of the proposed call signs scrawled in the white erase board, he said.

“Gay boy” was another.

The squadron ultimately chose “Romo’s Bitch”—an apparent reference to his love for the Dallas Cowboys and their quarterback, Tony Romo.

“I was like, wait a minute? What the hell? You think I’m gay? What a way to tell me that,” said Crowston…

….Crowston said his command was dismissive about his complaints. He said other officers believed it was “a joke and meant to funny.”

Crowston, who’d served a fair amount of time before making it into the naval air community, declined to tell the paper his sexual orientation, but he did call the call signs “workplace harassment” and filed a formal complaint with Navy lawyers.

Beyond the obvious homophobia and DADT overtones here, there’s a deeper problem that goes all the way back to Tailhook: The men and women we entrust to fly these $60 million weapons platforms off aircraft carriers and into harm’s way, they share the collective sense of humor and propriety of a Jerky Boy:

You smell that, civilian? That’s the taint of freedom! No wonder we’re No. 1!