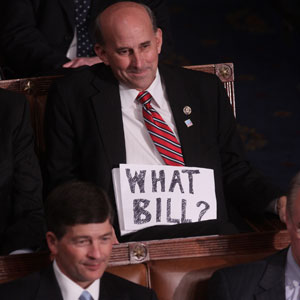 Recently, Rep. Louie Gohmert (R-Tex.) has beens sounding the alarm about a new and insidious plot involving so called “terror babies.” Infants are sometimes known to be terrors in their own right, but this diabolical plan involves terrorists sending pregnant women into the US to birth their America-hating spawns. The mothers and their kids then return home where, the congressman says, the children “could be raised and coddled as future terrorists”— and later, “twenty, thirty years down the road, they can be sent in to help destroy our way of life.” Gohmert, a member of the newly formed Tea Party Caucus and a supporter of a bill stemming from the “birther” conspiracy about the president’s citizenship, has used the far-fetched terror baby conspiracy to bash the Obama administration’s immigration policy and its legal challenge to Arizona’s draconian law. “They figured out how stupid we are being in this country to allow our enemies to game our system,” he said during a debate on the House floor in late June. “We won’t do anything about it we’ll even sue a state that tries to do something about it.”

Here’s the thing: There doesn’t appear to be a morsel of evidence to support Gohmert’s terror baby tale, which the congressman says he learned of from a woman on a plane while en route to the Middle East and from a retired FBI agent. (The FBI says it has no information about such a plot. And former top bureau official Tom Fuentes has called Gohmert’s claims “ludicrous.”) So last night Anderson Cooper featured Gohmert and his terror babies plot in the show’s “Keeping Them Honest” segment. What followed was about 9 minutes of high-quality crazy, courtesy of a congressman known for making outlandish claims and staking out unorthodox and outright bizarre positions.

Gohmert was in feisty form and quickly came unhinged (“you’re going to keep me honest!” he thundered), blasting Cooper for calling him out for political fear-mongering. “You’re attacking the messenger,” Gohmert yelled. “Anderson, you’re better than this. You used to be good. You used to find that there was a problem and go after it instead of going after the messenger.” Gohmert grow ever more irate, as Cooper repeatedly pressed him to provide any credible information to back up his claims. “Sir, do you want to offer any evidence?” Cooper asked at one point. “I’m giving up an opportunity to say what research and evidence you have. You’ve offered none, other then yelling.” Let’s just say Gohmert declined Cooper’s offer. Just watch this clip. You won’t be dissappointed. And, while you’re watching, keep in mind that Gohmert is a former district and appeals court judge.