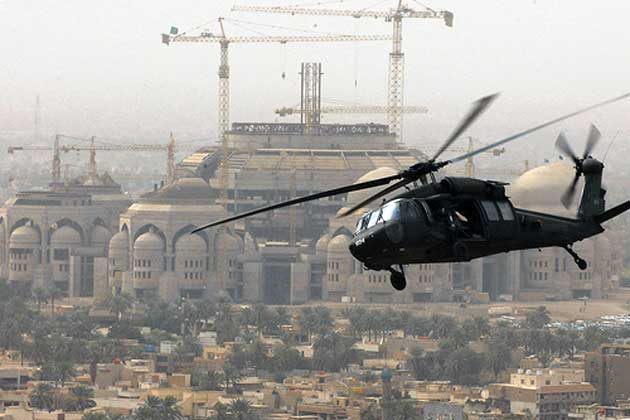 This is what the "Ground Zero Mosque" opponents think is happening at the WTC site. | Flickr/<a href="http://www.flickr.com/photos/soldiersmediacenter/3325314219/">US Army</a>.

A group of progressive Muslim-Americans plans to build an Islamic community center two and a half blocks from ground zero in lower Manhattan. They have had a mosque in the same neighborhood for many years. There’s another mosque two blocks away from the site. City officials support the project. Muslims have been praying at the Pentagon, the other building hit on Sept. 11, for many years.

In short, there is no good reason that the Cordoba House project should have been a major national news story, let alone controversy…. To a remarkable extent, a Salon review of the origins of the story found, the controversy was kicked up and driven by Pamela Geller, a right-wing, viciously anti-Muslim, conspiracy-mongering blogger, whose sinister portrayal of the project was embraced by Rupert Murdoch’s New York Post.

Justin mentions that Geller once suggested that Malcolm X was President Obama’s “real” father. But she’s also been involved in a more recent episode of Obama/Muslim rumormongering. Here’s MediaMatters on June 16:

A year and a half into Obama’s presidency, the far-right ranks of right-wing insanity—apparently undaunted by repeated failure—are still desperately trying to prove that he’s a secret Muslim.

This time, it’s G. Gordon Liddy and Pamela Geller, pushing a dubiously-sourced claim that President Obama admitted to Egyptian Foreign Minister Ahmed Aboul Gheit that he is a Muslim.

Liddy opened up his radio show on June 14 by reading directly from Geller’s blog post on the topic, calling it “breaking news” and stating that it comes under the heading “suspicions confirmed.”

Geller—a prime distorter of anything and everything related to Islam—wrote on her blog:

Egyptian Foreign Minister Ahmed Aboul Gheit said he had a one-on-one meeting with Obama, in which President Obama told him that he was still a Muslim, the son of a Muslim father, the stepson of Muslim stepfather, that his half brothers in Kenya are Muslims, and that he was sympathetic towards the Muslim agenda. [bolding in original]

To top it off, Geller went ahead and threw the words “I am a Muslim” in quotation marks and attributed the statement to Obama in the title of her post.

As you might imagine, this is total nonsense. The source for Geller’s claim—and I am not making this up—is a blogger who says his wife saw the Egyptian Foreign Minister on television saying that Obama told him he was a Muslim. Yet these are the kinds of people who the President decided to empower when he “clarified” his “mosque” remarks on Saturday, explaining that he “was not commenting and…will not comment on the wisdom of making the decision to put a mosque there.” Breaking news, Mr. President: you just did.