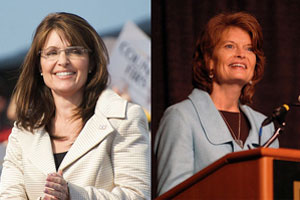 Does Lisa Murkowski have something to worry about in her primary on Tuesday after all? A few weeks ago, the Tea Party Express was touting new polling numbers that suggested that their candidate of choice, Joe Miller, was gaining on incumbent Republican Lisa Murkowski in Alaska’s primary race. I couldn’t track down the poll they were referring to, but a new one from RT Nielson research late last week shows Miller catching up after some significant spending on ads and a boost from the state’s former half-term governor. The Murkowski team’s own polling also shows Miller at her heels, despite outspending her challenger by almost 20-to-1.

Polls last month had Murkowski crushing Miller by 32 points. This latest shows Miller now at 35 percent to Murkowski’s 47 (though we should definitely note that it was very limited—just 243 people were polled—and it was commissioned by the Tea Party Express). And of course, Murkowski still has a healthy lead. But as we’ve learned with other big primaries this year where the tea party candidate unexpectedly surged (see: Sharron Angle in Nevada, Rand Paul in Kentucky, Ron Johnson in Wisconsin, and Mike Lee in Utah), it’s perhaps worth it to pay attention to these challengers from the right.

Miller has benefited from several high-profile endorsements in the past weeks. He’s got the support of Sarah Palin (and Todd, who has held a fundraiser for Miller), as well as former Arkansas Gov. Mike Huckabee. Palin wrote a lengthy Facebook screed in support of Miller on Friday, a last-minute push to raise $30,000 for the candidate. He’s also got the support of conservative media figures Mark Levin, Lars Larson, and Laura Ingraham.

The Miller camp paints Murkowski as too “liberal” for Alaska. Miller’s a relative unknown in the race, an attorney whose only other major bid for elected office was a failed run for the state house in 2004. A rundown of his basic positions: Government spending is bad, abortion should be illegal, health care legislation is unconstitutional, and so is cutting planet-warming emissions. According to Miller, the “science supporting manmade climate change is inconclusive” anyway. (Murkowski, on the other hand, has been one of only a small handful of Republicans who has acknowledged that global warming is a problem, though she’s also arguably one of the most effective politicians operating today to undermine action on that front.)

Perhaps the most intriguing element of this race is the revival of the Palin-Murkowski grudge match. Lisa Murkowski’s father, Frank, tapped her to fill the Senate seat he vacated in 2002 to become governor of the state. The senior Murkowski later lost his reelection bid to Palin in 2006. Murkowski has said there’s no “blood war” between the Murkowskis and the Palins, two of the most powerful political families in the state. But Palin, on the other hand, has been happy to throw punches. This week she recorded a robocall for Miller ripping Murkowski’s record (and erroneously claiming that Murkowski co-sponsored cap and trade), and her Facebook post called Murkowski “part of the big government problem in Washington.”

Murkowski is expected to win on Tuesday, and barring some sort of miraculous Miller surge, she probably will. What that says about Palin’s efficacy as a champion for candidates even in her own state might well prove the most interesting part of Tuesday’s primary.