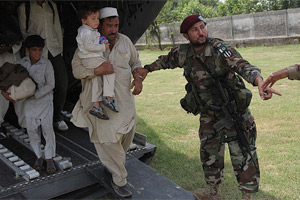 “Hearts and minds” relief campaigns in the Muslim world are old hat for the United States. But staging a winning one in insurgency-, corruption-, extremism-, and now flood-wracked Pakistan could prove another matter altogether. While the calamity presents an opportunity to win over distrustful Pakistanis, it also pits the United States against militants dead set on expanding their influence and exploiting the security vacuum caused by the flood.

The disaster has killed at least 1,500 people, and affected another 14 million. American relief efforts have centered on the Swat Valley, which was wrested from Taliban control by the Pakistani army last year. Combat troops have been re-deployed on aid and rescue missions, improving their standing with Pakistanis. Meanwhile, the UN has asked the international community for another $459 million for emergency relief and the World Bank has committed $900 billion dollars for relief and reconstruction efforts. And an “extremely anxious”-looking Richard Holbrooke said that the US wants to devote the October meeting of the Friends of Democratic Pakistan group (convened in 2008 to promote democracy and support social and economic development in the embattled country) to the flood.

At a White House press briefing earlier this week, Deputy Press Secretary Bill Burton said the United States will continue doing all it can to alleviate suffering, on top of the $16.25 million it added to its original $55 million committment to Pakistan. Does the White House think that militants might use the flood to build further influence in the region? “We certainly hope that they are not using this opportunity to inflict even more pain on the people of Pakistan,” he said.

Hope is a tricky thing, particularly where insurgents are concerned. Never to be upstaged, the Pakistani Taliban has been quick to criticize US efforts, and plans to mobilize and fund its own relief operation. In an interview with the Associated Press, Taliban spokesman Azam Tariq claimed the international aid “will not reach the affected people, but will be pocketed by corrupt rulers” (because he’s a sweetheart, he also added that the flood was God’s punishment for accepting secular leaders). And a number of Islamist charities, including Falah-e-Insaniat—
which allegedly harbors ties with Lashkar-e-Taiba, the Pakistani militant group blamed for the 2008 attacks in Mumbai, India—
have risen to the occasion, and are providing support in badly affected areas, backing up Tariq’s tough words with action of their own.

Some 60,000 Pakistani troops have been detailed into rescue operations, hindering their ability to battle ever-pesky insurgents. Military officials say that rebels previously driven from the region are ramping up their attacks in flood-ravaged areas. The massive flood-related crop losses add to the economic insecurity that makes the country ripe for all kinds of exploitation by militants. The flood gives them a chance to provide where the Americans and international community can’t, and lead where the elected leadership apparently won’t. It’s some kind of crazy opportunity vacuum.