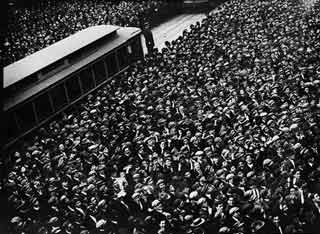 Back in 2003, a nightclub fire in Providence, Rhode Island broke out when the pyrotechnics of the ‘80s metal band Great White malfunctioned and ignited the ceiling. At first, patrons thought it was just part of the show. But within 90 seconds, what are known as “crush conditions” began to develop in the crowd—that is, the force of compression inside the panicked mass became so great that people started to suffocate.

This death by compressive asphyxia was undoubtedly what killed many of the 96 victims who never escaped the club that night, as it is thought to be responsible for almost all deaths that occur in out-of-control crowds. One of the reasons compressive asphyxia is so common is that crush conditions develop too quickly for anyone of authority to respond. The only way to stop them is to detect them before they happen.

Earlier this month, researchers from Manchester Metropolitan University and Hughes Associates Inc. published a study in the open-access journal arXiv.org that outlines a method for detecting nascent crush conditions in large crowds. Theoretically, we already know how to spot the development of crush conditions. Simply look at the position and velocity of each individual in the crowd and, with some good-old-fashioned Newtonian physics, identify where force is building up.

The problem with this method, though, is that crowds are complex systems, which means each person is either directly or indirectly influencing everyone else. So calculating the total force exerted on each person turns out to be a surprisingly time-consuming task—even for a computer. To address this issue, the researchers attempted to come up with a less computationally demanding measure of when a crowd is about to get ugly.

What they found, in short, is that simply by looking at the direction each individual in a crowd is facing, along with their position, one can determine whether the mass as a whole is growing dangerous. Here’s how it works: Think of a crowd of people like a wave pool, where choppy waters represent crush conditions. When individuals are facing in similar directions to their neighbors, the crowd moves together—much like a single wave moving through the pool. But if people move in different directions they start pushing against each other, and that’s when things get choppy. So by detecting when movements in the crowd start to fall out of sync, the researchers can predict the development of dangerous conditions. They tested their predictions on a model of the 2003 Rhode Island fire and found them to be accurate.

Predicting deadly crowd behavior seven years after the fact is all well and good, but could this it actually save lives? The trouble, as explained here, is that the researchers have only tested their ideas on a case where the outcome was known. So it’s possible that it will predict crush conditions even when they’re not actually going to occur. In other words, the method might cry wolf. But assuming it doesn’t, they hope to develop software that can analyze live video of a crowd and sound the alarm if the kids are not, indeed, alright.

For now, though, you’re on your own. So how can you avoid being crushed in a concert riot? The short answer is that the crowd needs to stay calm and make use of all available exits. And, if you’re into probability, just maximize this guy: