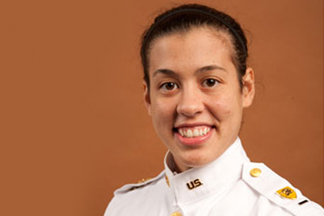 When hearing about Cadet 2nd Class Katherine Miller, the top-ranked US Military Academy student who tendered her resignation this week because she is a lesbian, one can’t help but wonder: What exactly is it like to enter a service academy—with its already-high-pressure environment, where concealing the truth is a termination level offense—and effectively have to conceal a large part of your identity?

It turns out Miller had a lot to say about the pressures she faced: Since May, she blogged anonymously about her own trials and a long-standing culture of homosexual solidarity at West Point. Calling herself Private Second Class Citizen, she shared her story with readers on the lesbian culture site Velvet Park. “We’re awfully proud of Katie over at Vp,” Velvet Park editor Julia Watson told Mother Jones Wednesday morning in an email.

Miller’s blog is a treasure trove of heart-wrenching information—sort of like a better-written WikiLeaks war diary for DADT. Her first post traces her own development from an idealistic soldier-aspirant to a social warrior:

Two years ago, I submitted to a contract that claimed the policy was necessary in maintaining unit cohesion and good order and discipline. I hesitated for a moment before I ultimately agreed to surrender a significant piece of my identity with the flick of a pen. After two years of silence I am finally aware of the magnitude of discrimination the policy condones…

…The discrimination I have faced as a cadet at the United States Military Academy at West Point, an institution regarded as the pinnacle of leadership excellence, has exposed me to the harsh reality of ramped inequality in the military and in society. As a result of this epiphany, I have redirected my life from battling terrorists in the Middle East to combating hatred and intolerance domestically.

But what follows, in a series of three posts, is a must-read for anyone interested in DADT and military tradition. In that series, “West Point Lesbian Culture 101,” Miller exposes what many vets and LGBT advocates have already suspected: There are plenty of gays and lesbians already in the ranks. “Of course, upon entering West Point I was scared to death that I was the only lesbian in the entire Armed Forces, and therefore the only woman struggling with the policy,” she writes. “How very wrong I was…”

And how do these lesbian cadets acknowledge and interact with each other, while navigating not only DADT and the USMA honor code, but 18-hour days of classes and sports, as well? Miller writes about the resorcefulness they develop—a trait you’d think the Army would appreciate:

Although we can speak freely behind closed doors, it is rare that we find ourselves in situations devoid of heterosexuals (i.e. in class or military training events). Our dire need to gossip has led to the development of our own lingo. We’ll give our girlfriends a masculine nickname (my Kristin became “Kris”). Or if questioning another cadet’s sexuality, we’ll ask, “Yo, is that girl family?”

Furthermore, my particular group of friends refers to themselves as “bros,” embodying their masculine gender identities and their affinities toward feminine women.  For example, should we be sitting down enjoying a Bud Light at Chili’s on the weekend, a comment is always made regarding the physical appearance of the waitress. And the hostess. And the girls sitting in the booth next to us… We resemble our male cadet counterparts exceptionally well. We really could be an asset to unit cohesion, bonding with men over our mutual love for women.

Using reconstructed dialogue, Miller also shows how being closeted at a service academy is different—and in many ways tougher than being closeted in the regular Army or Navy. Strict honor codes turn every classmate into a potential snitch, who can have one bad day and ruin your future. Not only that, but ina testosterone-fueled adolescent atmosphere, male cadets can quickly assume that if you’re a woman and you’re not into them, you’re batting for the wrong team. Miller emailed a male friend at the academy, who was writing sarcastically below, but his sentiment gets at a real truth about the challenges gays and lesbians face at West Point:

Me: That I’m a whore or that I’m a lesbian? Because female cadets only fall into one category or the other here. No exceptions, apparently.

Cadet: Facts matter little in a smear campaign. I’ll decide when it comes to that point.

Me: I’m not too worried. You have no proof on either.

Cadet: Well, since you said you were one of the two choices… and since almost every guy in the company has tried to hook up with you… and since rumors fly… and since I haven’t heard any wild hook up rumors about you… I think it can logically be deduced… Don’t worry; your secret is safe with me

But perhaps the most fascinating and touching part of Miller’s story is in her final blog post, where she recounts her decision to come out to a professor. Already thinking about leaving USMA, Miller had applied for a scholarship to Yale and learned that, as a semifinalist, she’d need a letter of recommendation from an academic instructor:

…I couldn’t pursue my activism any longer without help.

Five minutes later I rushed haphazardly into my professor’s office. I was sweating in my shiny, plastic Chorofram shoes, and after feeling my pulse my throat I became aware of how tight my collar was around my neck. “Ma’am, do you have a second,” as I closed her office door behind me, consciously worsening the stuffiness in the room and in my heavy wool uniform. Without waiting for a response, I seated myself. “Ma’am I’m transferring next semester. And I need a leader of recommendation in three days. For a scholarship for gay, lesbian, bisexual, and transgender students.”

“And you’re leaving because of Don’t Ask, Don’t-”

She studied me for a second, asked a series of questions for clarification, and agreed to write me a letter of recommendation.

As soon as I was out of her sight, I did a little Jersey Shore fist pump in the air.

That’s who our war-embroiled, innovation-starved 21st century defense establishment is turning away. If the Army’s not going to give Katherine Miller a commission, then perhaps at least the publishing world will give her a book deal—and a wider platform to share her experiences with other soldiers and young lesbians and gays.