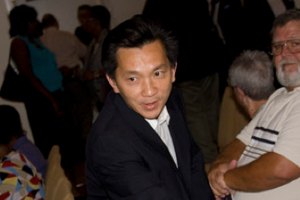 Two years ago, when Ahn “Joseph” Cao became the first Republican to win Louisiana’s 2nd district since 1890—and the first Vietnamese-American congressman in history—his victory appeared to be a total fluke. His Democratic opponent, Rep. William Jefferson, had been indicted on multiple felony accounts for accepting hundreds of thousands of dollars in bribes. (Jefferson was later convicted and sentenced to 13 years in prison.) Running as a reform-minded conservative, Cao pulled off an upset victory in majority-black, heavily Democratic New Orleans that stunned both parties. After the initial shock of Cao’s win wore off, Democrats consoled themselves that, given the unusual circumstances surrounding the race, the seat would easily flip back to blue. Election forecasters have listed him as one of the most endangered members of Congress this year.

But Cao is once again seeking to defy expectations in his bid for reelection this year. Having tried to fashion himself as one of the most liberal and unconventional House Republicans, Cao has striven to raise his profile back at home. And his campaign is attempting once more to tie the opposition to Louisiana’s ethically troubled past. “Initially people were thinking that he was one and done—and once the Dems aligned, then he would be gone,” says Peter Burns, a political science professor at Loyola University New Orleans. “He has more of a chance than people expected.”

As the Republican Party moves farther and farther to the right, Cao has set himself apart, proving to be a thorn in the side of an increasingly ideological GOP. Last year, he was the only Republican to vote for the House’s original version of the health care bill (though he ultimately voted down the final legislation, along with every other Republican). He was one of only three Republicans to support legislation that would repeal the military’s “Don’t Ask, Don’t Tell” policy for gay service members. And he most recently became one of the only House Republicans to support the financial regulatory reform bill.

Cao’s campaign intends to play up not only his maverick persona but also his relationship with President Barack Obama. “We feel the friendship with the president is a positive…There’s a natural bond there,” says Cao’s press secretary, Democratic media consultant Cheron Brylski, describing how Obama had singled out the congressman at the signing of the financial reform bill last month. (“Good to see you, Joe,” he told the congressman as he was thanking the few Republicans present.)

Weeks earlier, Cao and his family had joined Michelle Obama in Washington, DC, for a healthy-food initiative event that the first lady was headlining. Cao and his staff also point out that he was invited to Obama’s private Super Bowl party earlier this year—though he was unable to attend due the massive blizzard that hit the east coast. For Obama as well, the political upside of having a Republican ally is clear, given his ongoing and often fruitless quest for bipartisanship. “Obviously, there are a number of issues we don’t agree with one another on, but it’s still just a tremendous relationship. I’m able to playfully joke around with him,” Cao told a local New Orleans paper, in a story that billed him as “Obama’s buddy.”

Like the president, Cao has used his unusual biography and immigrant background to appeal to unlikely voters. A Vietnamese refugee who fled the war and arrived to the US when he was 8 years old, Cao studied for years to become a Jesuit priest before becoming an immigration lawyer. Both his home and his law office were destroyed during Hurricane Katrina—an event that helped motivate his first, ultimately unsuccessful, run for public office when he made a bid for state representative in 2006.

But Cao’s personal story—along with a handful of high-profile, aisle-crossing votes—may only take him so far in a race that simply boils down to the demographics. “It’s going to come out as a numbers game,” says John Maginnis, a longtime Louisiana political writer and analyst. In a district where black voters make up about 50 to 55 percent of the electorate, Cao would have to win about a quarter of the black vote to prevail, Maginnis estimates. All of Cao’s potential challengers are black and likely to gain the backing of many Democratic officials who defected to Cao in the wake of the Jefferson scandal. And the Democratic frontrunner, state Rep. Cedric Richmond, has already garnered a bevy of endorsements from Louisiana officials—including Sen. Mary Landrieu—as well as the backing of the Democratic Congressional Campaign Committee. Many local politicos dismissed the results of a recent internal poll from Cao’s campaign that showed him leading by 51 to 26 percent, saying it was too early to get reliable results.

In order to connect with his constituents—and shore up his political bona fides—Cao has made the rounds back home throughout his tenure, popping up at charter-school openings, health fairs, town halls, and community centers in the district. Though he’s not been the local face of the oil spill, he raised eyebrows in June when he suggested that a BP executive “commit hara kiri” over his role in the disaster. Like most Gulf Coast legislators, he’s also opposed Obama’s moratorium on offshore drilling—though he’s also joined environmentalists and some House Democrats in backing a proposed citizens’ advisory council to provide independent oversight over the clean-up. “He has a very astute pulse on what it takes to position himself well in public,” says Saundra Reed of the Central City Renaissance Alliance, a neighborhood association in the district. Cao also seems to have retained his reputation as an honest, squeaky-clean former divinity student. “When people meet him, they seem to be impressed by how genuine he is, that he cares, he has a philosophy and isn’t necessarily an ideological person,” says Loyola’s Burns.

Particularly in the wake of Katrina, as well as the current aftermath of the BP spill, concerns about federal support and funding have loomed large in the district. Though Cao has yet to begin hitting the trail in earnest, his campaign has already launched a website with a Google Map tracking all the federal dollars that have come into the district. To a certain extent, Cao may simply be riding the coattails of veterans like Landrieu, who have the political clout to secure the funds. But the hope—according to Karen Carvin Shachat, a New Orleans-based Democratic political consultant—is to send the message that “if somebody’s been delivering, why mess with success?”

But ultimately, if Cao does manage to eke out another victory, it may yet again be chalked up to external circumstances. Black voter turnout in the district has been historically low and could drop even more precipitously in 2010. For years, the Association of Community Organizations for Reform Now (ACORN), which was headquartered in New Orleans, had given black voter registration and political participation a boost. But ACORN’s demise could end up hurting the Democratic ground game against Cao this fall. He also lucked out when the highest-profile Democratic prospect—state Sen. Karen Carter Peterson—decided not to run for the seat.

Most significant for Cao, however, is the possibility that a black independent candidate may make a bid for the seat and split the vote. Last month, Ron Austin, a black lawyer and member of Jefferson Parish’s Alliance for Good Government, entered the race as a third-party candidate just as the Democratic primary was beginning to heat up. (Austin, a Democrat who registered as an independent just before filing, has vowed to vote and caucus with the Democrats.) While it’s still uncertain whether Austin will remain in the race through the general election, the threat was real enough that Richmond, the Democratic frontrunner, accused the Cao campaign of pushing his candidacy as a spoiler. “If [the black] vote gets split up in any way, Cao will win,” says Burns.

And it seems that Cao himself is trying to make his election bid a reprise of 2008 in more ways than one. While the Democratic primary isn’t until the end of August, the Cao campaign already seems prepared to go after Richmond on ethics-related issues. In 2008, the rep had his law license suspended after the state Supreme Court ruled that he had falsely sworn about his place of residence when he ran for city council in 2005. “He’s someone with a history of the old New Orleans,” says Brylski, referring to the city’s infamous reputation for corruption and ethics scandals.

While Cao is unlikely to win back many of the endorsements that he secured from Democratic, anti-Jefferson defectors in 2008, he has managed to hire a whole slew of experienced Democratic hands to work both in his district office and on his campaign. Rosalind Peychaud, a former state representative, serves as the deputy chief of staff in his New Orleans office. Cao also recently hired the Rev. Byron Clay, a former official from the Southern Christian Leadership Conference, to serve as his campaign’s outreach coordinator to black churches. There’s also Brylski, a pro-choice Democrat who’s worked as a communications consultant for major Louisiana Democratic officials. “I’m the most liberal person, I think, in the campaign,” she says.

Cao’s surrogates have already helped guide him to key community hotspots during his many weekend visits back home. But by bending over backwards to court Democrats in his district, the Republican also risks being accused of pandering to local voters—as well as alienating the minority GOP voters whose support he’ll need in full force in November. Though Reed, the community organizer, praises Cao for showing “compassion and a heart” during the health care vote, she is also skeptical of his public rollouts in the district. “He knows where to be…he’s never caught on the wrong end of a discussion,” says Reed. But, she adds, “On the balance, I find he really caters to what his image looks like.” Tending to his image is a start, but, having entered the House as Washington’s most unlikely congressman, Cao may need another small miracle to prevail.