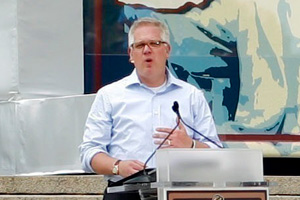 For weeks prior to Glenn Beck’s “Restoring Honor” rally, the conservative talk show host kept insisting that his demonstration on the steps of the Lincoln Memorial wasn’t going to be a political event. Of course, no one believed him. Maybe they should have. Beck made it clear from the minute he jogged on to the stage that despite the presence of Sarah Palin, his much-promoted event would not be political, but religious. And if grassroots conservative activists came looking for marching orders, they might have left a little disappointed. Beck did deliver his signature rants about how the country is going to hell in a hand basket, but his prescription consisted of little more than maddeningly vague allegories about “a man with a stick” (that would be Moses) and such platitudes as, “God is the answer and he always has been.” With this heavy focus on God as political savior, the rally seemed to mark Beck’s official transformation from Fox News talker to Mormon televangelist. All he really needed for the revival was a tent.

Prior to the rally, critics and civil rights leaders took umbrage at Beck for promoting himself as the second coming of Martin Luther King Jr. and for planning the event on the 47th anniversary of the “I Have a Dream” speech. That didn’t slow Beck down. At the rally, he talked about how much he identified with the slain civil rights leader, noting he was even staying in the same DC hotel where MLK had rested his head after his legendary speech. But the similarities ended there. King used his rally and speech to move an agenda forward. He called on the crowd before him (and people watching elsewhere) to pressure Congress to change discriminatory laws and to focus on jobs. What did Beck ask his hundreds of thousands of followers to do?

The Beckheads who’d been waiting in the hot sun for hours got these marching orders: “Pray on your knees. Recognize He is our king. Pray on your knees and let your children see their parents humbled before God.” Oh, and of course, like all good televangelists, Beck asked them to give money—not to candidates or political parties, but to a church. Beck talked wistfully about the spiritual transformation he underwent after he embraced tithing, which is heavily encouraged by his Mormon church. He said at first he was resistant, happy to show off the $20 he put in the plate on Sunday morning, but not much else. But now, he said earnestly, “It is my joy and my honor to tithe 10 percent.”

But the real proof of Beck’s televangelist conversion came with his revelation that God answers his prayers for money. In a tale straight out of Pat Robertson’s 700 Club, Beck said that as he was working on the logistics for the big rally, he discovered that his fundraising efforts had come up $600,000 short. Naturally, he prayed: “Lord, we don’t have anything else left.” And he said, “Within two days, without telling anyone about it, $600,000 came in.”

The crowd seemed to be OK with all of this. For all the talk about how Beck’s event was going to be a test of the strength of the tea party movement, I met a fair number of people who had nothing to do with the tea party. That’s no shock; lots of tea partiers who don’t fancy Beck wouldn’t have been caught dead on the Mall today. There is a fairly serious distinction between Beck followers and those who consider themselves true tea partiers, and it rests almost entirely on the religious issue. As one attendee from upstate New York explained to me, “The tea party is just about lower taxes.”

The Beck crowd, by contrast, had all the trappings of a reconstituted, 21st Century Christian Coalition. While political signs were banned from the event, the marshals didn’t seem to object to the two enormous crucifixes some people brought to the front of the crowd. Lots of the people in attendance appeared deeply religious. A Boy Scout troop leader from New Hampshire was wearing a scout hat that identified him as “Elder Delevan,” as in Mormon church elder. Joan DeMasi, 79, from Warwick, Rhode Island, told me that she had been drawn to the rally by “God–and Glenn Beck.” She said she was tired of “people not saluting the flag and not believing in God.” So from her perspective, “Restoring Honor” was simply “incredible.” Whether the rest of the tea party movement will share such a glowing assessment remains to be seen.